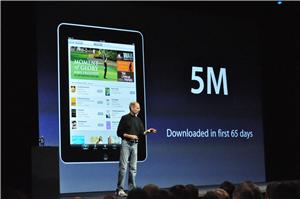 Today at the WWDC event in San Francisco, Apple CEO Steve Jobs took the stage for his keynote address. During it, he gave some key stats about three key pillars of Apple’s recent strategy: the iPad, the App Store, and the new iBooks store.

Next some iBooks stats:

Jobs also used the stage early on at WWDC to take his first shot at Google. He notes that the developer of Elements for the iPad recently emailed him to let him know that he earned more money in the first day of sales for the iPad than he did in 5 years from Google ads on his periodictable.com site.

Jobs also highlighted something that Apple has begun pushing recently thanks largely to its war with Adobe: HTML5. “We support two platforms at Apple,” Jobs said — HTML5 and the App Store. “Apple’s browsers are in the lead in supporting the HTML5 standard,” Jobs noted.

The two biggest stats Jobs said for last. There have been over 5 billion app downloads so far. And Apple has paid out over $1 billion to app developers (their 70% cut fo all sales).