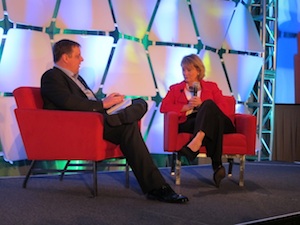 Today at TechCrunch Disrupt in New York City, Yahoo CEO Carol Bartz took the stage for a fireside chat with our own Michael Arrington. It took about 15 minutes, but Mike got her to tell him to “fuck off.”

That’s not all she had to say. When Mike pressed her about Yahoo outsourcing the social graph to Facebook. Bartz admitted that if she could own it (as Facebook does), she’d love to. “Oh, I’d love to own it — shit, why not?,” she said. She said also that “I’d love to be Queen Poobah — but I’m not.”

I highly suggest you read the notes below. She had plenty of interesting things to say. Not just about the new Nokia and Match.com deals, but about Apple, Google, Facebook, and yes, even TechCrunch.

Update: And here’s the video (or it’s at the bottom).

MA: So how the fuck are you?

CB: Is that all you got?

MA: So my last two posts were critical.

MA: You don’t read TechCrunch? I can show you how. It’s weird, I talked to you backstage, you’re a human being. You took the time to talk to us.

Okay let’s go. What is Yahoo?

CB: (her mic cuts off) What is Yahoo? Yahoo is a company that is very strong in content. It’s moving towards the web of one. We have 32,000 variations on our front page module. We serve a million of those a day. It’s all customized. Our click-through rate went up twice since we started customizing this. People come to check the things they like. “You can just get it together.” Yahoo is one site people always stop at.

MA: You had two pieces of news. One is a partnership with Match.com. Why abandon personals?

CB: It wasn’t in the sweet spot of what we do. It was the same with HotJobs. It’s just not about in line with we do anymore. I was trying to think about if I should fly with the volcano cloud, I checked the AP, it was 17 hours old info. We need live content feeds.

MA: Are there any other of the big Yahoo properties you’re killing?

MA: What was the other one?

CB: We had an announcement with Nokia. Co-branded.

MA: How important is mobile to Yahoo going forward?

CB: We’re on 37 million of the 82 million mobile devices in the US. We have half the US market. People don’t think that’s true, but it is. And we’re huge in the emerging world. It was important to get to the dominant partner outside the market.

MA: So is the focus not on the smartphones?

CB: We still do them too. We have an iPhone app, for example. We have alliances with 100 OEMs. We’re on 2,300 different handsets. I have a BlackBerry and an iPhone.

MA: Let’s talk about the product perspective. You’ve made some changes and there have been departures. The new blood is Blake Irving. Does he run product at Yahoo now?

MA: Is there a product Czar? Does he answer to you? Think about how Steve Jobs acts, he’s in charge. Is that Blake?

CB: You can’t find anyone like a VP that compares to Steve Jobs so that’s not fair. Blake reports to me — under him there are three segments. We have one of the largest private clouds in the world. We serve 10 billion ads a day — that’s a huge technical effort. There’s no one strategy at Yahoo. We do a lot of things.

MA: What about the iPad?

CB: With the iPad, Apple is a hardware and software company. It’s an evolution — not revolution. These days if you’re not coming out with some device, you’re not innovating, apparently. But that’s not true. There’s a soul to our product. Absent Steve Jobs, who’s the product soul in big companies? It’s a lot of people who have to do it.

MA: You ever hear the saying, “a camel is a horse designed by committee”?

CB: That’s true but you implement with several people. I can imagine that a lot of concepts are brought to Jobs too — there are people involved. It’s naive to think there’s not.

MA: Why Blake? He was a professor at Pepperdine. Before that he was at Microsoft.

CB: Well he was taking a two year break from Microsoft.

MA: Fair enough. How important is social to Yahoo?

CB: Back when social had a broad definition, you could almost say that Yahoo Finance chat was the first social product. We have a million comments a day now. We had 85,000 comments on day one at Yahoo News. And we’re merging in some of the big products like Twitter, etc. We’re doing some new cool things with Mail next month too. It’s about finding out the new things about people.

MA: Facebook would say the social graph is key. Is that important to you? Are you comfortable not owning that?

CB: I don’t know if anyone really owns it. They share it with partners. It’s just about getting the information. Building a better user experience.
“Oh, I’d love to own it — shit, why not?” “I’d love to be Queen Poobah — but I’m not.” (reference to Grand Poo-Bah from Gilbert & Sullivan’s “The Mikado“?)

MA: In 2008 you said Jerry Yang first approached you about the job. You said you weren’t the right person for the job. Are you now?

CB: I’m one of many. Many people could do this job. There’s no one special person for any job. That’s the beauty of it.

MA: You’ve asked bloggers to tone down some of the critiques and advice. But you made a statement earlier this year that Google has some problems.

CB: Did you see the interview? I said Google needs to grow a Yahoo every year — just go into a lot of businesses. They have to be a 20% grower. It’s not so bad to say.

MA: You said they were so reliant on search advertising.

CB: Is that wrong?

MA: No but you said it’s not a good trick to have.

CB: I would love to have that! Like the social graph. What I said has to be true. I’m just saying they need to grow a company the size of us every year. They have to do other things.

MA: Are you being a hypocrite by giving them advice when you say you don’t want advice?

CB: I gave them my opinion. You do that all the time. “I’ve never had a bong in my life if that means anything to you.”

MA: Is your pitch kind of BS though?

CB: Steve Jobs came back to Apple in 1997 — the iPod came out 4 years later. 3 years after that is the first time his market cap grew. It took 7 years. I’ve been here a few months. Give me a break. You are involved in a very tiny company.

CB: It probably takes you a long time just to convince yourself what to do. “So fuck off!”

MA: Are you a search company or not?

CB: Half of our revenue is from search. The fact that you can crawl the web is a commodity. We’re about search, but we’re not a search company. We do a lot of things.

(Video starts a few minutes in, skip ahead. We’ll replace this shortly)