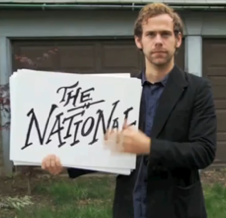 Later this month, YouTube is teaming with Vevo and American Express to live-stream a concert by The National that’s being held in Brooklyn. The concert, which will be held on May 15 at 8 PM EST, will be available free of charge to YouTube users around the world (with a few restrictions based on rights issues). You’ll be able to watch the concert here. The event isn’t without precedent — YouTube has previously live streamed numerous political events, IPL Cricket, and a U2 concert. But it is interesting because it marks the first time that Vevo has been in on the action.

Vevo, which is often referred to as the “Hulu of music videos”, is a joint venture between Google, Sony Music, and Universal Music Group that launched in December (EMI’s content is also available). The primary purpose of the site is to offer users a more engaging and music-focused experience than YouTube proper, while also drawing better advertising rates that are split between Google and the record labels.  YouTube powers Vevo’s video streaming, and all Vevo videos are also available on YouTube. It’s an interesting arrangement, to say the least.

The livestream for ‘The National’ will appear on YouTube, with some Vevo branding both on the video player and the video’s channel page (you can get an idea of what this will look like in the shot below). The show will benefit the charity Red Hot, and will be directed by D.A. Pennebaker and Chris Hegedus. Additional supporting content will be on both YouTube and Vevo. American Express is the sponsor for all of this (it’s promoting a new credit card).

So is Vevo’s involvement with the live stream the start of a new trend? Yes and no. There are more live concert streams in the works that will be joint ventures between American Express, Vevo, and YouTube, though details are still being hashed out. But Vevo also intends to start broadcasting its own shows independent of YouTube, and YouTube will also likely be doing shows of its own in the future (especially since Warner Music Group is not part of the Vevo venture). 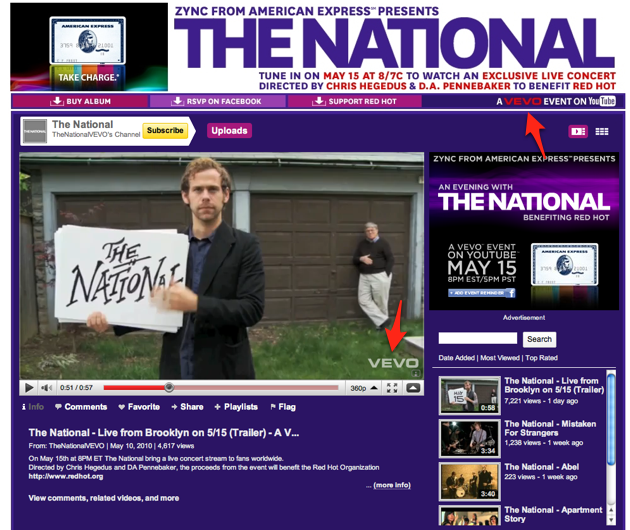