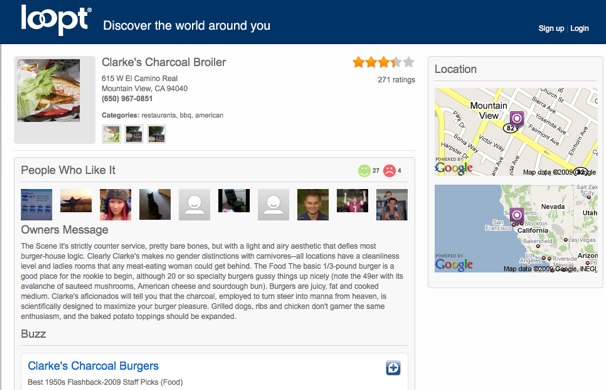 Before there was Gowalla or Foursquare, there was location-based social network Loopt. Launched in 2006, Loopt was one of the pioneers of the location-based mobile social network. And Loopt has gained a huge number of users of its mobile apps; the social network currently has 3 million mobile users, 1 million of which are on the iPhone. Compared to Foursquare and Gowalla, which have 150,000 and 50,000 users respectively, Loopt has a pretty significant user base. More recently, Loopt upgraded its mobile offerings to offer a check-in where you can also review a place and help recommend things for your friends to do, called Pulse. The mobile feature aggregates data on all of these “check-in spots,” which include, bars, restaurants, and more. It’s kind of like a local search engine. And it appears that this data is expanding Loopt’s business.

Now Loopt is venturing into Yelp’s territory (even as rumors swirl about Yelp) by making these local reviews available on the web. Similar to Yelp, each business has a separate page, where you can see hours, location (via a Google Map), ratings, pictures and more. Loopt will aggregate all the ratings and reviews made by mobile users on the business’ page, and web users can also comment on the page, but have to limit their comments to 140 characters or less. And Loopt aggregates reviews from professional sources like Zagat, and more user-review focused sites like Citysearch to further its recommendations on the page (this is also available on its mobile app). All of this data has allowed Loopt to create what founder Sam Altman refers to as a “local search engine.” Two examples of pages can be found here and here. As of now, the pages have limited functionality but Loopt will be adding user generated content and other data shortly.

The key part of this venture is that Loopt’s web-based reviews are valuable because users can see which of their friends have visited a certain place or establishment. Loopt has all of this mobile data which shows what people like, and who they are connected to and this social data adds an extra compelling component to its local reviews site.

While Loopt is not yet advertising on the site (it does advertise on its mobile apps), I’d expect this to come soon. And the startup collects money from some advertisers who pay them on a per action basis, so Loopt currently will see some revenue from click throughs. Unfortunately, Loopt doesn’t allow business owners to create a page themselves, but this might be a feature added in the near future.

Loopt’s founder and CEO Sam Altman says that it is hoping to grab a part of the competitive landscape that houses Yelp, Citysearch and others. The whole idea of combining data on where and what users like to do with local listings for businesses is huge for local merchants and businesses, as not only can they get detailed information on their demographic, but they can also use the listings as a way to offer coupons and other incentives to visitors. Google even seems to be sniffing around this opportunity, too.