We’ve been bullish about location-based social networks for quite awhile now, especially since Apple announced that it would open up the iPhone to developers. And with two significant developments in this space just this week (more on that below), we thought it would be a good time to take a step back and look at the options currently available through the Apple App Store.

What makes a “location-based” social network different than a normal one? At least as things stand today, location-based social networks run primarily on smartphones that have the ability to determine a user’s current location, usually by leveraging GPS or cellular tower triangulation. The social network then uses your location to reveal nearby friends and places of interest. See our Location Technologies Primer for additional information. 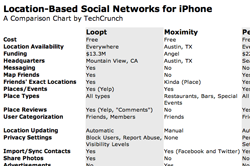 Currently there are six major location-based social networks available for the iPhone (click on the comparison chart to the right). All of them tell you how far away other members are from you, with most focused on helping you find your friends but some designed primarily for discovering strangers. A few of them chart the location of your friends’ on an interactive map (something I actually think all of them should do). They provide a wide range of privacy settings, but all will stop reporting your location when you simply close the application (Apple has yet to release its push notification system that will let these apps constantly report your location in the background). They also vary widely in how precisely they identify the locations of other members, although all but one of them work anywhere in the United States.

After testing this entire batch, I’ve come to the conclusion that none of them is quite ready to achieve mainstream usage. I believe most, if not all, of the following things must happen before location-based social networking becomes the new “killer app”:

These are weaknesses shared by all of the current iPhone location-based social networking apps, each of which we cover briefly below. 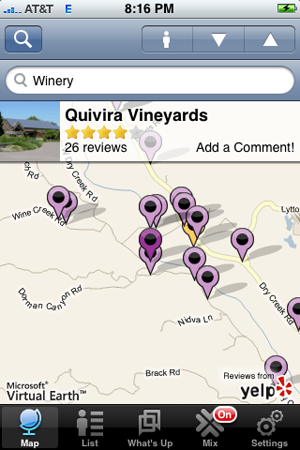 Perhaps the most well-known of these companies, Loopt has been working for years to get its technology on a variety of phones (the iPhone being just the latest and most functional of them). It is also perhaps the most developed of the batch, and the most generic. Use it primarily to see on a map where your friends are located nearby. Restaurant and other local reviews are secondary, having been brought into the app through a partnership with Yelp. Get directions to other users, view their latest status updates (which are often accommodated with photos taken on-location), and ping them when they haven’t updated their location for awhile.

The Mountain View-based company has ventured into the matchmaking business this week by adding a new feature called “Mix” that shows you, for the first time on Loopt, strangers in your vicinity. You can see all of the people nearby who have turned on the Mix feature, and you can filter by types (age, gender, tags, dating status, community) as well. This is Loopt’s attempt to help people hook up at bars (an idea that gets thrown around by many entrepreneurs and has always puzzled me). But if it takes off, it may have even greater sociological effects than Loopt’s core friend-finding capabilities.

The New Kid On The Block – Moximity 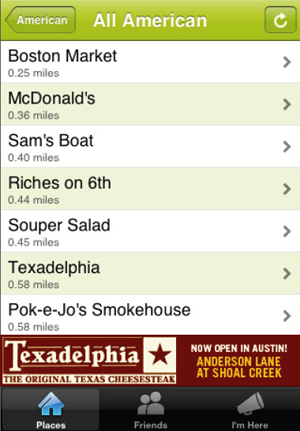 Launching into private beta just this week, Moximity is a new location-based social network out of Austin, Texas that wants to help you find both your friends and local establishments. Taking Paul Bragiel’s marketing advice, Moximity is rolling out one geographical region at a time, starting with Austin itself. Everything is local – the restaurant listings, the users, and even the advertisements (yes, this is the only one of these networks actually monetizing on the iPhone right now).

One major quality that sets Moximity apart is the way it handles user accounts. When you join and start configuring, you don’t make “Moximity friends”. Rather, the service pulls in your contacts from Facebook (and later, other sites as well) and lets you track those of your existing friends who also use Moximity. When you post a status message, it also gets pushed out to your Facebook and Twitter accounts.

Moximity would benefit from an interactive map that uses pins to show where your friends are located. However, unlike Loopt, which gives you the precise street address of your friends, Moximity always matches you with particular places (restaurants, stores, etc) so individual pins for users might not be appropriate. Co-founder Bryan Jones says some breed of mapping functionality will be included in the next release.

If you live in Austin, you can get into the service immediately by emailing your name and zip code here. 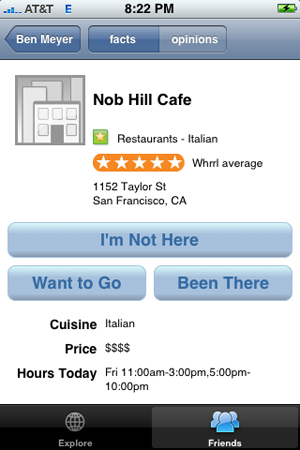 The best-funded of the bunch is a Seattle startup named Pelago with an app called Whrrl that centers around identifying and reviewing nearby establishments of all types. Locating friends takes a bit of a back seat to the idea that you should share Yelp-like reviews with the people you know.

The information about places is comprehensive. You can find cuisine types, prices, hours, phone numbers, websites, street addresses, ratings and reviews. While you can view the (5-star) ratings and reviews from every member, you’re encouraged to focus on those of your friends. When you view a friend’s profile, for example, their reviews are displayed prominently. That said, you can “fan” strangers if you like their tastes (although apparently only through Whrrl’s thoroughly developed web app).

Whrrl also identifies events that are going on in your area. The combination of event and place information is great but I get the feeling that this app will have to depart a bit from its “reviews” roots to become a widely embraced service. More generic social features (such as walls and notifications) are needed to get me to use Whrll when not looking to share or gather opinions.

Pelago has raised its funds from the iFund, Jeff Bezos, and T-Mobile (among others). 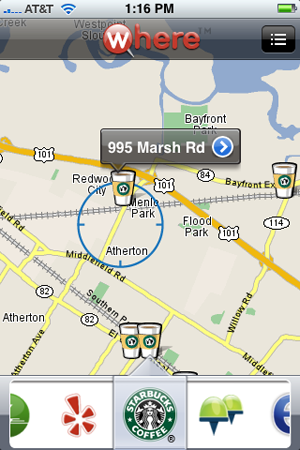 Where is an iPhone app developed by a Boston-based startup called uLocate that has received a considerable amount of funding (at least $15.5 million) over the last several years. It has everything but the kitchen sink. Along the bottom of the app is a dock-like menu that shows a variety of sub-applications, each meant to help you find something in your area:

The UI needs a bit of work (too many popups) but regardless, this app is handy for quickly finding the nearest of some particular thing on an interactive map (coffee, friendship, wheels, etc). 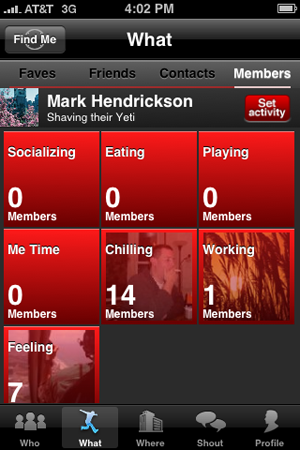 Limbo is provided by a company that seems to have undergone quite a few transformations over the years. We reviewed the company in May 2006 when it was a bizarre auction service based on text messaging. Back then it was located at 41414.com and you can still see that ancestry in the current logo (just look at the reflection).

The app is, at its heart, more focused on locating strangers and learning about what they’re doing than any of the aforementioned apps. All users are categorized by four types: Members, Contacts, Friends, and Faves. You can opt to share your location with each or all of them, with “Members” being everyone you don’t know, “Contacts” being people pulled in from your phone’s address book, “Friends” being people more important to you, and “Faves” being the most important people to you.

Users are further categorized based on their current “activity” (or status). They are either socializing, eating, playing, chilling, working, feeling, or enjoying a bit of “me time”. You can view users by their particular categories on a “What” page that displays the categories in a grid.

Limbo neither shows you your friends’ locations on a map nor gives you their exact locations (just their general regions, e.g. San Francisco). Both would make this app a lot more useful. 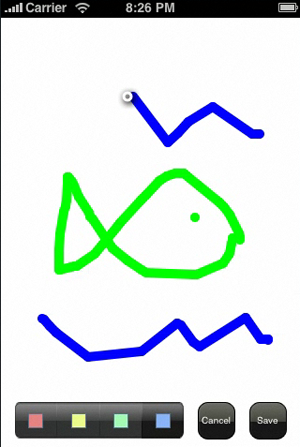 Zintin has gone even further in the direction of helping you communicate with strangers nearby, rather than helping you find your preexisting friends. Users in the vicinity are displayed in all-inclusive list along with their current status messages. When you select a particular user’s name, it takes you to their Wall, where short notes, photos, and scribbles can be posted by any user.

The Wall is the central, and pretty much only important, feature provided by Zintin (so-called “bulletin boards” are also provided but they’re essentially Walls for particular regions). If you find someone with particularly cool stuff on their Wall, you can request to exchange your contact information and meet them. But most people will just use the app to see what kind of juvenile stuff others around them have decided to share. If you’ve turned on the “allow mature content” setting, then that content is primarily explicit material, so be warned.

Zintin, which has been in development by a few Stanford CS grad students since late 2007, is mostly a curiosity at this point. However, the scribble feature, with which you can make quick doodles and post them for others, should make its way into other apps.

Neither of the big American social networks have added location-aware services yet, but they’re coming. Expect them to eclipse several if not all of these services after learning from them.