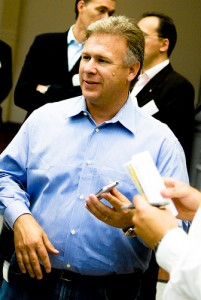 So, apparently, Apple’s Phil Schiller is starting to talk about Apple’s missteps. After months of silence, one of Apple’s top executives (and possibly the most public-facing one next to Jobs) has started to reach out to the tech community to help explain Apple’s numerous, absurdly embarrassing blunders. Some may be satisfied with Schiller slowly sending private e-mails out to various developers and bloggers.

Not me. I want answers. I think many of us do. And not just about specific issues like the banning of one small iPhone app (Ninjawords). Not just one private e-mail to one developer which the rest of us can’t even read. That’s helpful, granted. And I’m stoked that Schiller was willing to take out the time. But while he’s at it, I think the general public of Apple products users would love to know a lot more. At the very least, I know I would.

So here are 6 questions for Apple’s Phil Schiller that I would really love to know the answer to. Feel free to add to the list in the comments.

(Mind you, I don’t expect to get answers on all of these right away, but eventually would be nice).

(Oh, and some of these are for AT&T also. Primarily because, as far as I’m concerned, they are both accountable for each other’s failures.)

1. What is your App Store policy? Specifically, how do you determine whether apps in the App Store are rejected or accepted? Additionally, why even bother taking on the liability and responsibility of making such determinations? It may have sounded like a good idea at first, but do you still think this is the best course of action given the App Store’s incredible success?

2. I know you won’t answer this, but how my mouth waters at the thought of even asking this question: what does Apple say to the serious anti-trust and anti-competitive allegations brought against it in recent years? If you’re asking “what anti-trust and anti-competitive allegations” please read: 1) Jason Calacanis’s post and 2) the FCC’s concerns about Apple’s blocking of Google Voice.

3. What are you doing about the complaints? Steve Frank wrote in his blog that Apple is “taking these complaints seriously.” How so? What is Apple doing – or going to do – to rebuild relationships with the community?

4. What involvement does AT&T have in the App Store process? They’ve said publicly that they are not involved in the process. I have my doubts. What does Apple say about AT&T’s involvement?

5. Why are developers still complaining about late payments? The last time we wrote about this was months ago, but since then I’ve spoken privately with many developers who say this is still going on. I’ve also heard from these same developers that the App Store review process has taken weeks (sometimes more than a month): is any effort being made to improve this turnaround time?

6. What is the deal with the exploding iDevices and how widespread is the problem? Has Apple taken any action to decrease the risk of overheating in its devices? This isn’t a new problem. Apple has had overheating issues for a while. What are you changing hardware-wise to fix this?

It is obvious that many of these questions will not get answered, but it would be nice if someone at Apple at least spoke to the general principles. Publicly.

In the meantime, MobileCrunch readers: feel free to comment on what questions you may want answered. If you come up with some good ones, I’ll add them to the list.

Phil: My e-mail address is gaganATcrunchgearDOTcom, in case you are willing to address some of these questions.