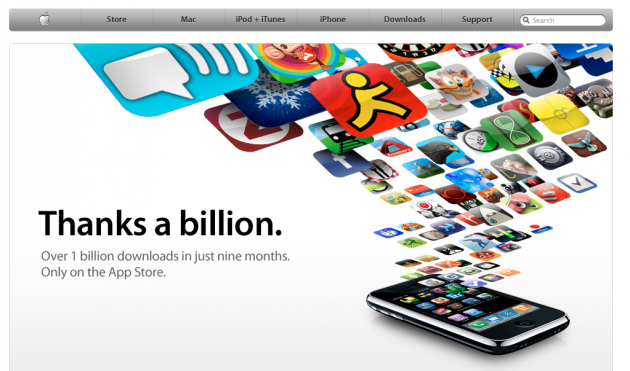 We all know that Apple is closing in on a billion app downloads in the App Store. Currently, the counter on the main Apple.com claims it’s about 10 million away from the major number. But, Apple apparently already knows when the billion mark is going to be passed, because the billion celebration page is ready to go and can easily be accessed, right now.

And we know the exact time Apple is predicting when it will cross the mark — at least, right now (more below): 1:24:06 AM PST on April 23. Simply go to your system settings and set the date and time to anytime after that mark, and reload the main Apple page. You’ll be greeted by big picture on the landing page reading, “Thanks a billion. Over a billion downloads in just nine months. Only on the App Store.”

And actually, if you change to a before the mark Apple has set, you can see the counter advance closer and closer towards the billion mark.

Of course, this means that the number is at least somewhat tied (update below) to your computer’s clock rather than an actual billion app sales mark being triggered. Not that it’s all that surprising. After all, with so many apps being sold every second, can you really expect Apple to do anything other than estimate? This would be an issue though if said it was giving away a prize to the person who specifically downloaded the billionth app (it’s not).

Update: It looks like Apple is constantly tweaking the exact timing based on the following text file, as commenter Robert notes below. As of right now, the rate of Apps being sold appears to be slowing down, pushing the time out a bit.