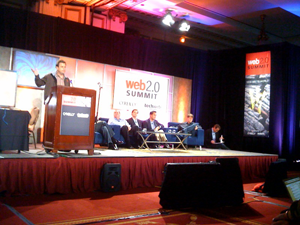 One of the featured events at this week’s Web 2.0 Summit was the Launchpad, a showcase of six companies that were each given 5 minutes to pitch a room full of VC’s, entrepreneurs, and other notables in the tech industry. The companies were judged by a panel of venture capitalists, consisting of: Chris Albinson (Panorama Capital), Patrick Chung (New Enterprise Associates), Michael Goguen (Sequoia Capital), Erik Straser (Mohr Davidow Ventures), and Todor Tashev (Omidyar Networks).

As soon as the presentations were concluded, the audience was asked to vote on its favorite company using an instant-SMS voting system. After only a few minutes GoodGuide, a TechCrunch50 finalist, emerged as the crowd favorite and took the top prize.

Below are profiles of each presenting company, along with some of the input offered by the VC panel.

CarbonNetworks is an emissions management software platform that allows companies to effectively keep track of their emissions and monetize them. The site offers price forecasting so companies can determine if their carbon credits will be financial asset or liabilities, and helps them deal with them accordingly. The site isn’t exclusively involved with carbon offsets, as it also looks at different sources or energy and offers consulting services.

Michael Goguen – I question the timing. One has to wonder if the priorities are shifting. Are companies really going to be spending on this at this point, instead of cutting costs? While SaaS model has lots of appeal, it seems to work best when you can justify paying for it constantly, instead of just upfront once. Once I get my act together would I still want to pay for it?

EveryScape is like a Google Street View for everything, offering 3D interiors of restaurants, salons, salons, retail stores, or any other interior users might be interested in. The site takes ground level photography using what founder Mok Oh called a “highly affordable and scalable technique” (though he didn’t specify how it was any more affordable than the technology that already exists).

Users are presented with an interface that looks much like it would on Google Maps Street View, which they can use to navigate throughout the building. Examples of possible applications include allowing users to point out a specific table in a restaurant where their friends should meet. Eventually the site hopes to bring its technology to mobile devices like the iPhone.

Patrick Chung – My question is, is it a street view add-on? You’re gong to have trucks drive around to assemble the database. The images are going to be 2D, they aren’t going to have physics… If I wanted to see what something looked like at night, summer, winter, you’d have to duplicate by sending a truck out again.

TechCrunch50 runner-up GoodGuide presented its new iPhone application, which takes its database of the safety and “Goodness” of consumer products to the mobile platform. You can read our full review of the application here.

Erik Straser – Terrific job on providing motivational context. My concerns: This is a company where I’m not convinced this is a better startup or a better public service. So one of my questions would be, to what extent could you really build a high velocity transaction model off of this? Also, what’s the ongoing costs of content updating? Also, I wonder about localization, and if what water I buy might depend on where I live.

Todor Tashev- I think the service is very compelling. It seems like you have figured out a way to leverage credible data, helping consumers come to informed decisions. Two-fold values: I can make informed decisions. Also, the informed behavior of individuals could lead to a massive change that changes how a company designs products.

Predictify is a prediction platform designed to help users get an extra dimension of interactivity from the news, helping to drive engagement. The site also aggregates demographic information along with votes into a data-set. To ensure accuracy, users can get reputation scores, and can be identified as “experts” in fields.
To generate revenue, the site charges customers a per-answer fee (around $1), which gets split between Predictify and its users, depending on how accurate they are. You can read our initial introduction to the site here.

Chris Albinson – There were some interesting things. I like the engagement, the digg-like rating system. Patrick won’t like me for saying this, I didn’t get there. Challenge for me is that there are so many of these companies. I just don’t know how you build a big business. Facebook has own system on an established platform, but that didn’t have much value.
Patrick Chung – I thought you did fantastic job. I think you have amazing data possibilities. If you can do it better than Reuters… I think you’re eon to something big, I would stick to game models so you aren’t regulated by the SEC.

Qik, which we’ve covered extensively, is a mobile video studio for your phone. Users can broadcast video live from their cell phones and stream directly to the Qik website as well as embedded widgets found throughout the web.. The service can also be used to share and also as a one-button camcorder. You can read more of our coverage of Qik here.

Todor Tashev- It’s interesting. My concerns: it’s a very crowded space ,you have startups and then bigger guys like Yahoo. How can you make a long term competitive advantage? I was glad to hear that you’re working on partnerships with carriers. But I’m not sure it’s enough at this stage
Chris Albinson- I was skeptical myself. I was worried about complexity. Monetization of video continues to be a challenge. But I have to say you won me over. I think you have a differentiated platform. I love the extensibility of it. I think the company is on a great path.

Sungevity sells solar panels to consumers using an online platform that can expedite the installation process significantly while also making it much easier. Sungevity uses services like Google Earth and Microsoft Virtual Earth to look at rooftops and give near-instant price quotes. The company also says that it is 10% cheaper than the average solar panel installer in California. The company has been on the market since April 2008, and has projected revenues of $2.5 million. In the future the site hopes to license the technology out to other solar panel installers around the world.

Michael Goguen- This solves a problem because the industry is archaic. My problem is that a lot of companies have the same idea to use google Earth etc to do online quoting. So if you take that away as differentiation, you wonder where this business goes. Right now it’s a rat race.
Chris Albinson- I take the oppostie view. I understand the thesis. If you look at the growth, the growth and execution has been phenomenal. The key thing is that the financial crisis has killed the commercial market for solar. But there’s a huge market for consumers. How do you make it simple enough for consumers?