Think you’ve got the gift of foresight? The Washington Post has partnered with Predictify, an online polling service, to create a “Prediction Center” that allows readers to vote on possible outcomes for selected stories. Users will be able to leave their predictions and discuss their beliefs on an integrated comment thread, with the most accurate participants appearing on a leaderboard. You can access the main Predictify hub here.

Predictify, which launched in 2007, goes beyond basic polling systems by integrating discussion features and monitoring a users’ accuracy score across the entire service. While there isn’t currently a way to weight one question more than another, the site’s algorithm does take into account the type of question and the accuracy rate of participants. Besides the Washington Post, Predictify is also found on The New York Times and San Francisco Chronicle’s sites.

To offer an incentive for users to take part in the polls, the site has also implemented a premium program that allows companies to sponsor a poll and reward the most accurate participants with cash. In return, these sponsors are entitled to the demographics data that the service asks for with each vote. CEO Parker Barrile says that at this point it isn’t clear if the Washington Post will be making use of this feature, but if it does it will clearly distinguish sponsored polls from normal content.

While this partnership isn’t groundbreaking by any means, it serves as a reminder that “old media” is willing to embrace the interactivity afforded by the web. Whether or not the Washington Post’s implementation of Predictify will be popular remains to be seen, but for now it’s a big score for the service.

Note: TechCrunch is syndicated to WashingtonPost.com. 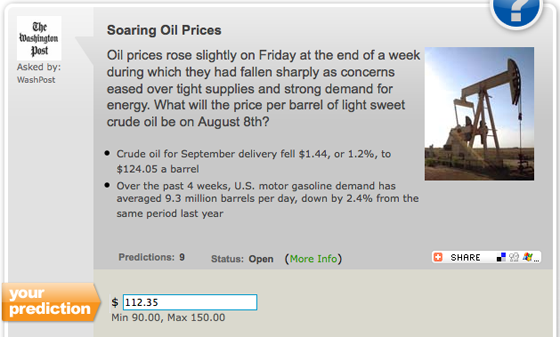