Google said today that it’s bringing its multisearch feature — which allows users to search using both images and text — to India. The company said at its Google for India event on Monday that the feature will be available in English starting today and will support Hindi next year.

The feature will allow users to use a photo of a clothing pattern, for instance, and add text like “dress” to look up dresses with that pattern. Multisearch was first announced in April, and the company made it available to U.S.-based users in October.

💠 Finding a notebook & a dress in Ikat? No dikkat 💠

Multisearch lets you take pictures or screenshots & add text to your query – just like naturally pointing at something & asking a question about it.
Coming 🔜in multiple Indian languages, starting with Hindi.#GoogleForIndia pic.twitter.com/ZtXKtnHsGD

The search giant separately said that it will also allow users to search within YouTube videos. This feature, which will be available on the Google Search app, will enable users to type a phrase after tapping on the “Search in the video.” You can search for a phrase and the results will show you occurrences of it in the video.

Do you struggle with skipping to the good part of the video? 👀
▶ ──🔘── 19:19
We're piloting the ability to search within videos on your phone's Search app. Just type in your query using the ‘Search in video’ feature & find exactly what you’re looking for.#GoogleForIndia pic.twitter.com/G3KIhpO7ow

Google also said that it is improving speech detection for people who are looking up voiced queries in the Hinglish language. For instance, if someone asked, “Sparrow ko Hindi mai kya kehte hai?” (What do you call a sparrow in Hindi?), the earlier model didn’t detect this properly. Now, the improved search will identify queries asked in English better.

What’s more, Google already allows users in India to look at search result pages in both English and Hindi at the same time. Now, the company plans to extend this to Tamil, Telegu, Marathi and Bengali languages next year. 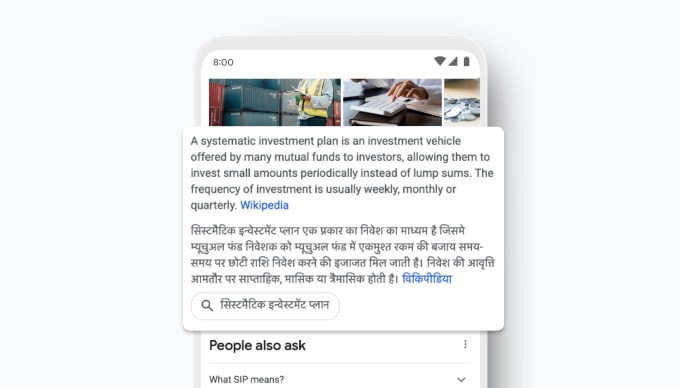 Google is also introducing a search functionality in its UPI-based (Unified Payment Interface) Googe Pay app. Users can now search about different kinds of expenses with natural language queries such as “How much did I spend on grocery in last month?”.

The company said that it will make some of these options easily available through shortcuts in the Google app on iOS and extend them to Android at a later stage.

YouTube to launch Courses in edtech push in India