OpenAI’s ChatGPT bot is the hot new sensation in the tech world, garnering over a million users just days after the launch. The chatbot is delivering answers to a wide range of questions, impressing many with its ability and speed while also sometimes leaving people amused and baffled with its take. You’ve likely seen scores of such screenshots on your Twitter timeline, and may have also captured and shared some answers and gotten in on the fun yourself. Now two developers — Steven Tey and Dom Eccleston — have made a Chrome extension called ShareGPT to make it easier to capture and share the AI’s answers with the world.

ShareGPT captures the full conversation with ChatGPT and generates a URL to share it with others. So instead of taking multiple screenshots of the conversation with the AI chatbot, you can directly share the URL (like this one).

Once you have installed the Chrome extension, head to the ChatGPT website and kickstart the conversation with the bot. After you have received the answer, you will see a Share button at the bottom. You can continue the chat or click on the Share button to generate a URL for the specific conversation. 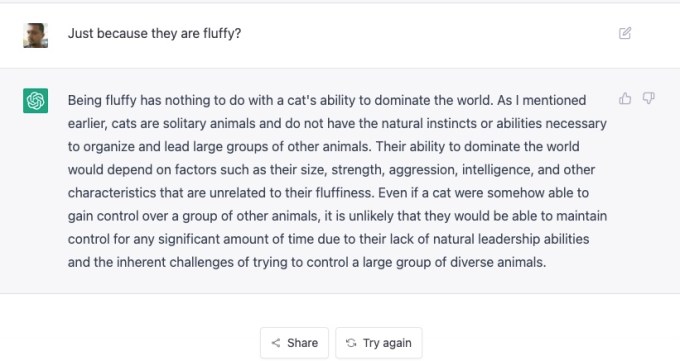 The neat thing is that when you share the URL on Twitter, you will see a preview of the conversation with ChatGPT, so the visual element is not lost and people don’t necessarily need to head to the website to read short conversations.

Example 3: How do you make Ukrainian borscht?https://t.co/0XdC9Fa9A2

ChatGPT, currently in research preview, is free to use. And while it has linguistic and factual limitations, it’s still a fun tool to use. It’s one of those tools that lets anyone try out AI’s prowess (or weaknesses) without having a lot of technical know-how.