As regulators put increased pressure on online companies to enact minor protections, Meta has been investing in various age identification technologies that rely on AI. While Meta hasn’t fully detailed what sort of signals it looks for to help it make a determination about someone’s age, it has previously said it may scan things like user’s birthday posts, as friends often comment with the poster’s real age in their responses. Meta is already testing this technology on Instagram after having prompted users to begin providing their birthday last year. This summer, it began asking some U.S. users to provide their ID or a video selfie if they said they were 18 or older.

Now, that same test will expand to Facebook Dating, an area of Facebook’s product where having minors participate could be even more problematic.

“We’re committed to making sure people have age-appropriate experiences across our technologies, and as part of this work, we’ve been testing age verification tools and using age detection technology to stop people under the age of 18 from accessing experiences meant for adults,” explained the company in a blog post about the new tests. 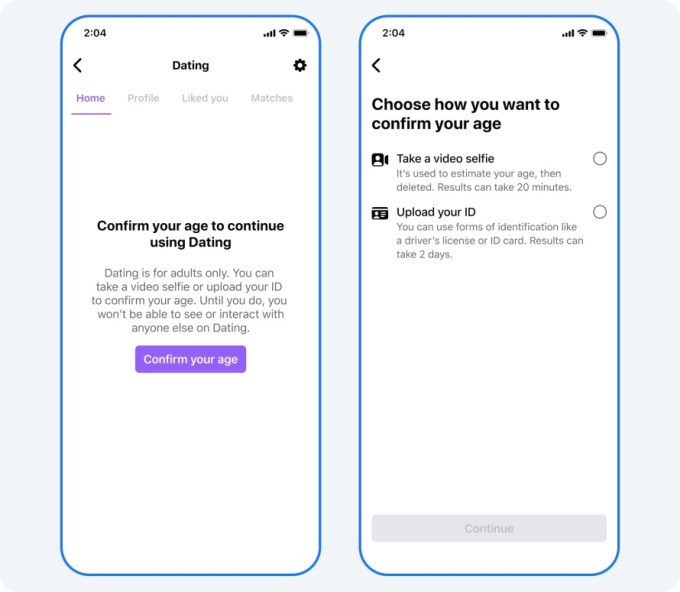 Similar to Instagram, when Facebook’s AI detects someone may be under the age of 18 trying to use Facebook dating, it will send them a prompt to verify their age.

The user can choose to take a video selfie where they record their face and then a still image from the video is shared with Yoti for age verification. Yoti uses technology that estimates a user’s age based on facial features. Afterward, the image is deleted. Or, if the user prefers, they can choose to verify their age by uploading their ID to Facebook, where it’s encrypted and then stored, the company says. Users can manage how long their ID is saved, notes the company, though its own help documentation notes that it may store IDs for up to 1 year. 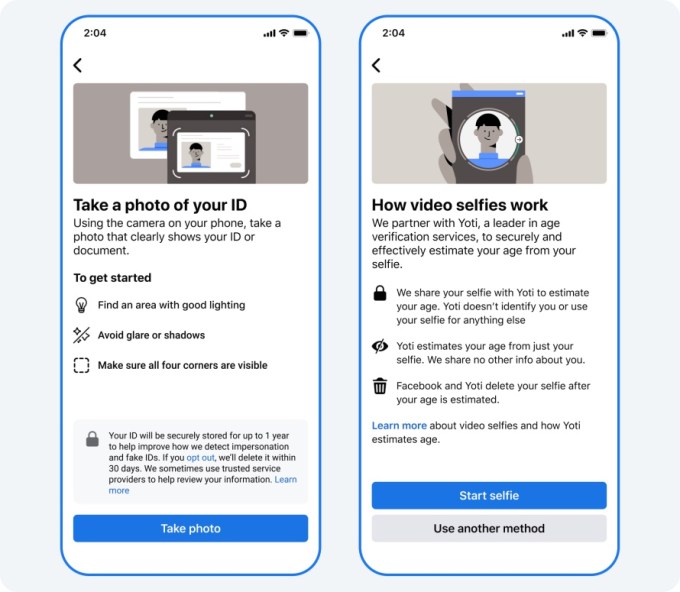 Meta says its age verification tools on Instagram have already had an impact. Since its tests in June, it found that approximately four times as many people were likely to complete its age verification requirements when attempting to edit their date of birth to be over 18. This resulted in “hundreds of thousands” of users being placed in their appropriate age groups. It also claims to have stopped 96% of teens who tried to edit their birthdays to over 18 using these tools. And it said 81% opted for Yoti’s video selfie to complete the process.

While age verification tech may help address the problem of minors attempting to use products designed for adults, it raises other concerns. Privacy and consumer advocacy groups are warning that the methods used, particularly those involving ID uploads, are invasive and risky. French data protection authority CNIL also warned that many of today’s systems can be easily circumvented. As seen with Facebook, the privacy risks are already apparent, as the company will be storing users’ IDs for an indefinite period of time after upload.

The company says its Facebook Dating test of age verification tools will go live in the U.S. but will expand the tools to other global markets in the future.