Following last year’s $205 million acquisition of AirTag competitor Tile by family locator service Life360, the two companies today will now integrate their products and services. With an update arriving soon to Life360’s app, members will be able to see the location of the Tile Bluetooth trackers on the same in-app map where they also track their family members’ locations. In addition, Life360’s more than 42 million members will also have the option to join Tile’s Finding Network, going forward.

The Tile Finding Network is what makes it possible for people to locate their lost items when their Tiles are out of Bluetooth range. Unlike Apple’s AirTag, Tile doesn’t have a network of iPhones sold worldwide to tap into. So instead, it relies on the Tile app installed by its own customer base. When any Tile customer is in the presence of a missing item with a Tile tag attached, that information is shared across the network to allow the item’s owner to locate their missing item. 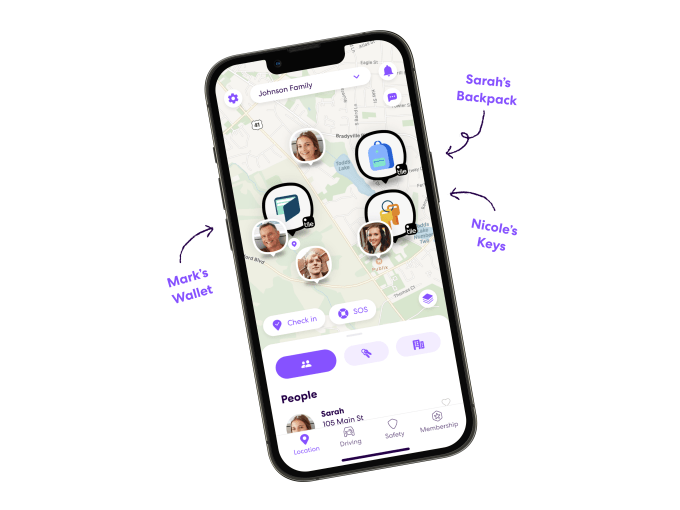 If all Life360 members opted in to join this network, it would increase by 10x, the company says. That would make it the largest cross-platform finding network across both iOS and Android. (AirTags don’t work as a tracker with Android, so Life360 isn’t counting them here. Apple’s trackers, however, can be scanned by Android devices, because they include an NFC chip, so they’re technically cross-platform in that way.)

Tile members who want to track their items in the Life360 app will have to go through a few steps to get started. They’ll need to link their Tile trackers to their account in order for their “Circle” of family and trusted friends (like caregivers, emergency contacts, etc.) to be able to see the location of the Tiles on the map. They’ll also be able to track Tile-enabled products that have Tile’s functionality built-in, like various laptops and headphones. When an item goes missing or is misplaced, users can then tap “Find” in the Life360 app, which rings the item if it’s nearby by launching the Tile app. If it’s further away, users can select “Notify when Found,” to tap into the Tile network to be alerted to its location.

Life360 sees the potential in tying Tile’s trackers to its broader family locator service as the small trackers are often used by families — to track kids’ backpacks, a teen driver’s keys, a parent’s wallet, a family pet and so on.

The company said the new functionality will roll out to its app over the next few weeks.