Apple released a new version of its entry-level iPad that Apple simply calls “the iPad.” It’s a dramatic refresh as Apple is swapping the familiar design with rounded edges and a home button. Instead, the iPad now looks more like the iPad Air and iPad Pro. But there are some compromises.

The new iPad starts at $449, which is much more expensive than the previous version that costs $329. But you get a larger 10.9-inch display (2360×1640 resolution), better specs and compatibility with some new accessories. It comes in four colors — blue, pink, yellow and silver.

There are two cameras on the device — the front-facing camera is a 12MP ultrawide camera and it is now integrated in the landscape edge of the iPad, which will make you look better when you make video calls in landscape mode.

On the back of the device, there is another 12MP camera. This iPad still supports Touch ID. In order to use it, you have to rest your finger on the the top button.

For the first time, the entry-level iPad is getting a USB-C port for charging and various accessories. This device still supports the first-generation Apple Pencil with its built-in Lightning connector.

And that’s probably the biggest drawback of the new device. Yes, you will need an adapter to charge the Lightning pencil with your new iPad. If you never had an Apple Pencil, Apple now includes this adapter with newly sold first-generation Apple Pencils.

But if you already have a Pencil, you’ll have to pay $9 to get a USB-C to Apple Pencil adapter. You plug in the Pencil on one side and you plug in a USB-C cable on the other side. And it looks like this: 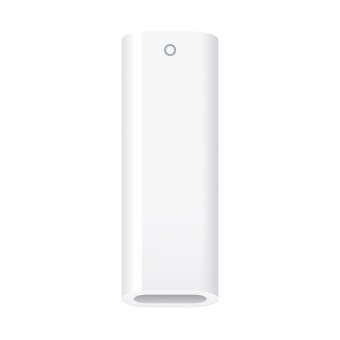 On the connectivity front, the iPad supports Wi-Fi 6 and you can also get an iPad with cellular connectivity that supports 5G networks.

When it comes to accessories, Apple has designed a new Magic Keyboard Folio with a trackpad. It features full-size keys with 1 mm of travel and a row of function keys to adjust the volume, control media and more.

Interestingly, the Magic Keyboard Folio is a two-piece accessory. You can attach the keyboard at the bottom of the device. The back cover with a built-in stand is a separate piece that magnetically attaches to the back of the device. Users can also fold the keyboard behind the device when not in use.

This keyboard is quite expensive as the Magic Keyboard Folio costs $249. There is also a keyboard-less version of the cover for $79.

Orders for the new iPad starts today and the device will be available on October 26. 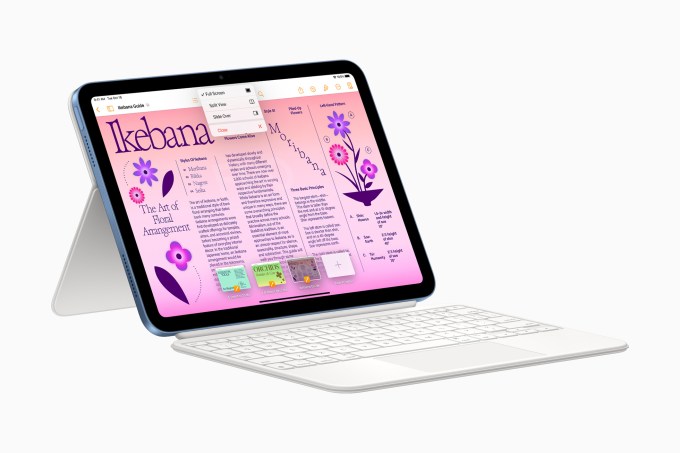