Some seven years after selling his previous company to Google, Jacob Bank is preparing to launch his next project, this time with a focus on automating mundane, repetitive tasks.

Bank was previously co-founder and CEO at Timeful, a smart scheduling app that helped users make better use of their time through automatically prioritizing their various commitments. After selling up to Google in 2015, Bank joined Google’s ranks and set about integrating core Timeful technology into Gmail and Google Calendar, before transitioning into various roles at the tech giant — including product lead for Gmail, Calendar, Google Chat and Google Workspace.

Fast-forward to July 2021, and Bank parted ways with Google to found Relay, which has a self-stated mission to “tackle collaborative workflows” with a product that sits somewhere at the intersection of Zapier and Asana. He also said that he’s managed to hire a number of product, design and engineering personnel from the Gmail and Google Calendar development team.

“From a product perspective, we aim to combine the time-saving automations of Zapier with the accountability of Asana, but optimized for repeated workflows,” Bank explained to TechCrunch. 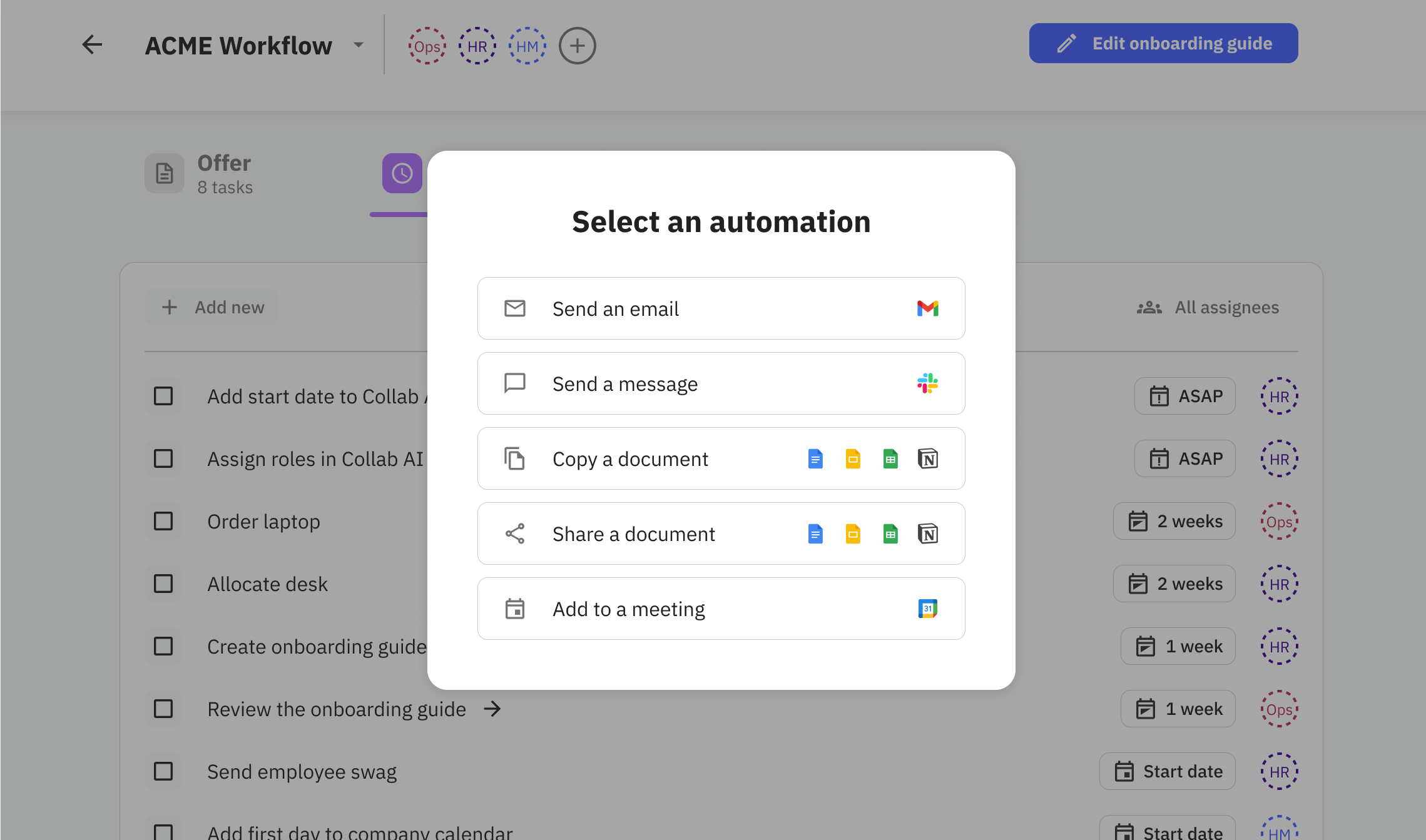 Automation for the people

There are certainly no shortage of workflow automation tools out there, Zapier perhaps chief among them, while newcomers such as Bardeen have also been attracting the attentions of venture capitalists. And it’s this desire to reduce tedious, repetitive tasks that Relay is looking to capitalize on too, with specific scenarios in mind — use cases that are less about “automated mechanical data flows from one product to another,” as Bank puts it, and more about supporting collaborative activities that may require multiple people to work together.

For example, anything that recurs or repeats across the business sphere, such as all-hands meetings, investor updates, board meetings, newsletters, planning cycles and so on, are within Relay’s scope. As are “function-specific playbooks” such as new-hire onboarding, customer onboarding or feature launches. It’s basically aimed at reducing time-consuming admin from various business functions, from COO to product management and customer success.

Relay sits on top of existing productivity tools such as calendars and team collaboration software, and reduces much of the manual labor involved in organizing a specific event or activity. For example, a monthly all-hands meeting may involve several contributors from different departments, each charged with preparing their own updates — with Relay, companies can preconfigure a lot of the administrative steps such as messaging contributors a few days before the all-hands with the correct presentation template, who are then prompted to add their content, and then automatically create a dedicated Slack channel for that specific meeting. 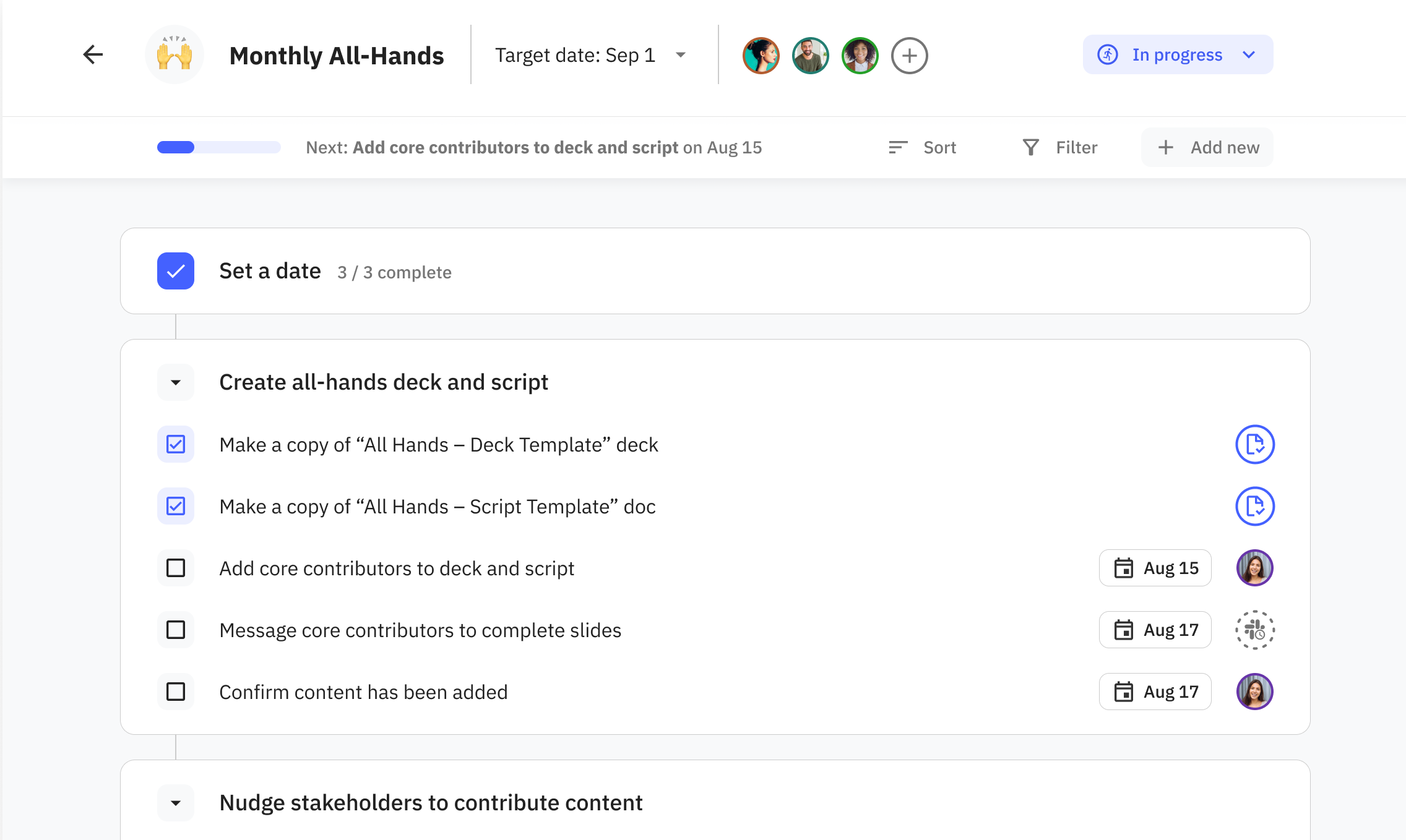 Using these various productivity tools separately in their own silos, if the all-hands meeting date has to be pushed back a few days at the last minute, this would ordinarily require organizers or management to manually update dates and schedules in Asana, for example. With Relay, any change is reflected up and down the chain.

“Maybe the most consequential difference between our product and what’s out there is that we’re going after a class of use cases that haven’t been explicitly served before,” Bank said. “The operating workflows required to run a great team: all-hands, leads’ meetings, executive updates, product reviews, business reviews, newsletters, planning processes, onboarding, project tracking, feature launches, customer updates and much more.”

For now, Relay remains a closed early-access product, with plans to transition into an open beta phase before the end of the year. While it’s keeping most of its early users under wraps for now, it did confirm Ramp and Lumos as “design partners” as it readies for a wider rollout.

“We’re targeting organizations that are between 30 and 500 [workers] in size, and most of our early design partners are tech companies,” Bank said.

To help take things to the next level, Relay also announced it has raised $5 million in a seed funding round led by Khosla Ventures, which also invested in Timeful back in 2014, with participation from Neo, BoxGroup, SV Angel and a handful of angels.

“Relay’s vision of understanding the best practices of top-performing teams and creating assistive software to bring those workflows to everyone could transform the entire way people work,” Khosla Ventures’ partner Sandhya Venkatachalam said in a statement. “In Jacob, we have a founder that we have backed before, with a team that has the track record, conviction and talent to execute on this incredibly daunting challenge.”