Between recent drama around gambling and its controversial decision to take a bigger slice of the subscription revenue pie, it’s been a dramatic couple of weeks for Twitch. Now, the company says it’s testing one new way for streamers to bring in cash from their most committed followers in the form of “elevated chats,” which let viewers pay to highlight a chat message and keep it visible for a set amount of time.

Twitch’s elevated chats look a lot like YouTube’s “super chats.” Like that feature, paying more will get your message featured for a longer interval, starting at $5 for 30 seconds and going up to $100 for 2.5 minutes in the spotlight. Those time intervals aren’t customizable for the time being.

🔬 We're experimenting with a new way for viewers to pay to support their favorite streamers!

💬 Elevated Chat will be available on select channels today.
⌛ Keep your messages visible in chat a for a longer period of time!

Twitch notes that streamers will get a 70/30 cut of revenue from elevated chats “after taxes and fees,” not the contentious 50/50 revenue share that it takes from most creators’ subs but also not the 80/20 it’s tried out in other chat test features either. It’s worth noting that Twitch also isn’t covering credit card processing fees, which YouTube does in its equivalent feature, and since people are buying elevated chats directly rather than purchasing bits first, the creator would shoulder that cost. 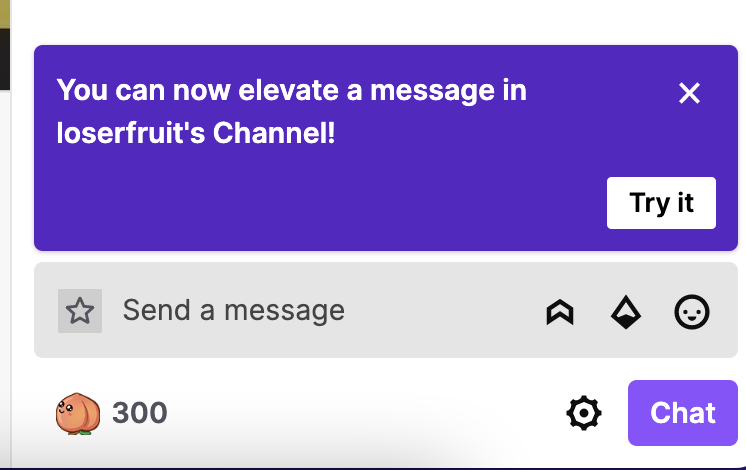 Streamers in the test, which runs for four weeks and is out in the wild now, will notice a new chevron icon in chat next to the cheer button. Because it’s an experiment, Twitch is running two versions: One features elevated chats at the top of chat and another will display paid messages at the bottom of the video player. Elevated chats go into a queue and will face the same moderation standards that any other chat would. The test is desktop-only for now, so the option won’t show up in the app, even in channels where the experiment is in effect.

Elevated chat is just a test for now, but it adds a more direct way for viewers to pay their favorite streamers in chat and one that doesn’t involve buying bits (Twitch’s virtual currency) like cheering does, for better or worse.