Google today announced it’s revamping the traditional Google Search experience to allow users to more naturally explore information. To accomplish this, the company is introducing a number of new features, including tools to drill down into topics and other changes that will make using search a more visual experience, highlighting maps snippets, imagery and even video in new ways.

The update follows Google’s disclosure earlier this year of internal research which indicated younger people had begun turning to other services, like TikTok and Instagram, instead of Google to kick off their web searches. The changes it’s introducing now show it’s taken some inspiration from how younger people use the web — preferring easily accessible and visual content, as well as more guidance as they begin to make queries.

To start, one new feature will introduce shortcuts to some of Google’s helpful tools directly on the home screen of the Google app, under the search box. Here, users will be presented with buttons that let users take quick actions to do things like translate text using their camera, solve a math homework problem, identify music, or shop from your screenshots, for example.

Some of these are clearly aimed at younger audiences, like those who grew up Shazam’ing music or online shopping then saving images of favorite products, as well as those who are comfortable trying out newer technology, like Google Lens.

These buttons don’t necessarily link to new features, but to Google’s services that may not be as well-known as they could be because they’ve not necessarily been well-highlighted in the past.

Another change will improve Google’s search refinement tools for text-based queries by expanding upon its existing list of auto-complete suggestions to provide buttons below the search box that can help you drill down into various sub-topics as you search.

For instance, if you were researching a place or vacation destination, the buttons might suggest topics like culture, history, weather or other things you may need to know.

However, the biggest change coming to Google Search is how it will present information to users for some of its search results. While it’s not abandoning the list of blue links, it is giving its informational boxes known as “Knowledge Panels” a visual makeover.

Here, Google will pull in a variety of information from various sources and in a range of formats. 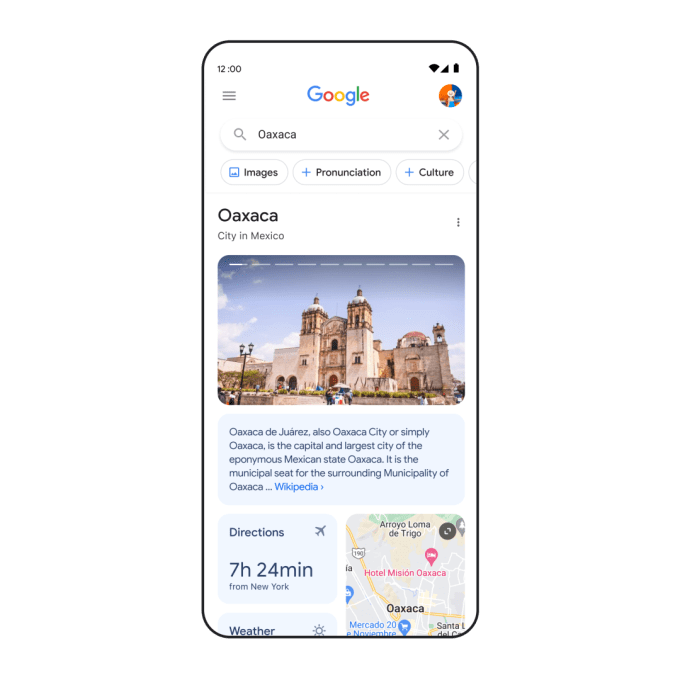 If researching a place, for example, you may find photos, a small map showing its location, directions, weather and even short videos. These aren’t presented as a list of links or in a text-heavy format, but rather in colorful, card-style blocks interspersed with media and imagery.

“This builds on our launches over the last year of introducing this really browsable visual-first results as well as continuous scroll on mobile,” noted VP and GM of Search Cathy Edwards, in a briefing ahead of today’s event.

The tech giant has been thinking about how to best showcase creator content in Google Search results for some time. In 2020, it began piloting a feature that aggregated short-form videos from TikTok and Instagram into their own carousel in the Google app. The following year, The Information reported it was seeking search deals with Instagram and TikTok that would allow it to get the data it needs to index and rank videos.

The company today is downplaying any specific agreements it may have, though, noting that TikTok’s content is all indexable on the public web — which means, for now at least, Google can access it and present it however it sees fit. YouTube Shorts content will also be indexed in the same way, she added.

“We index content and we return it when we think it’s relevant to the user’s results. And we’ll continue to do that,” Edwards said. 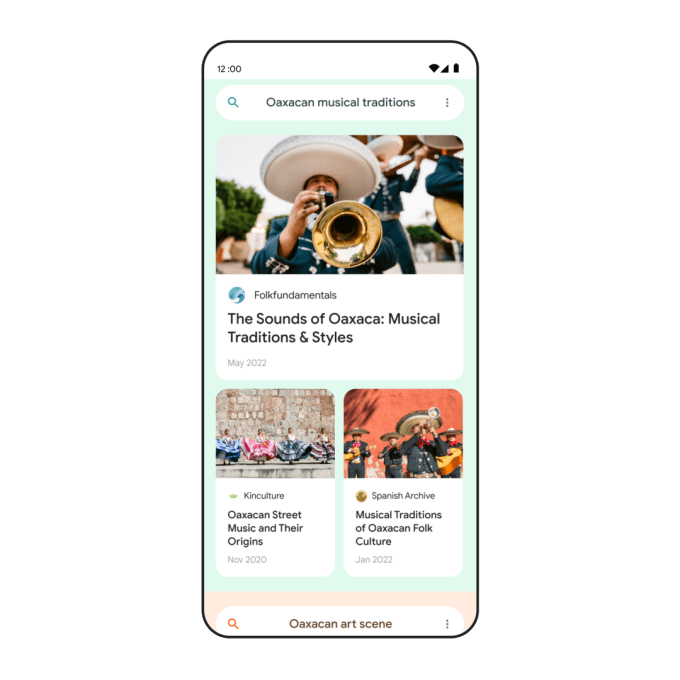 Google has other plans to better integrate TikTok into its search results, as well, but didn’t go into detail on that front, beyond acknowledging the user demand for more easily searchable TikToks.

“We definitely know that there is a class of user who really does like the results that they see on TikTok,” Edwards acknowledged. “I think part of that is just because TikTok has reduced the barrier to entry for content creation, so there’s some really good content there. And we are looking at more ways to bring that into our search results,” she said.

This visual update won’t impact all Google Search results, however. Instead, it will begin to appear on search result pages where the visual format would be more helpful, like travel searches, Google said. 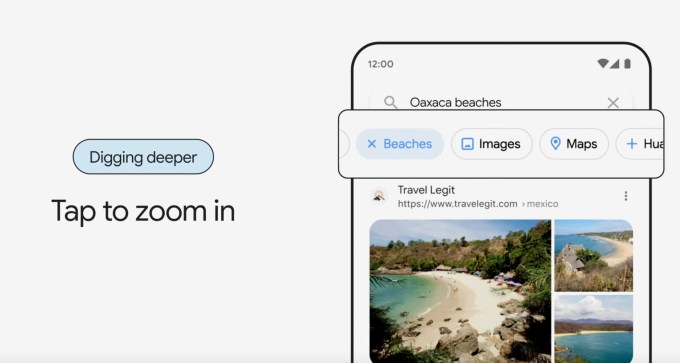 The updated Google Search experience was one of several changes the company announced today at its Search On event, which focused on improvements to various Google products like Search, Maps, Translate, Shopping and more.

There’s a very real sense amid these updates that Google is trying to adapt its business to a world where users are often no longer starting their queries on its own platform, as they did in the earlier days of the web. Google’s own research showed that almost 40% of young people would often just search TikTok or Instagram to find a place to for lunch, instead of Google or Google Maps, said Google Senior Vice President Prabhakar Raghavan, who runs Google’s Knowledge & Information organization, when speaking at a tech conference earlier this summer.

While Google won’t go so far as to admit Gen Z’s web usage is driving the change, it did acknowledge their influence.

“There’s definitely this really strong preference for visual there,” Edwards said, referring to Generation Z, but noted that Google had a responsibility to develop products for a larger user base than just one segment. Still, she added, “we certainly are particularly interested in these user segments and they did give us some ideas.”