Earlier today I wrote a piece about Apple Watch Ultra’s new scuba-diving feature, and a lot of folks came out of the woodwork to tell me they wouldn’t trust a “dive toy” to keep them safe under water. I respect their opinion, but I figured I’d share why I feel fully comfortable trusting Apple on my scuba-diving adventures. Because, obviously, you need to read a 2,000-word opinion piece where I nerd out about scuba diving. Let’s gooooooo.

First things first, I’m not here to convince people who don’t trust Apple otherwise; scuba diving isn’t without risk, and you are responsible for your own safety. If you don’t feel comfortable with the Apple Watch Ultra to keep track of your dive safety, then there’s a really simple solution: Don’t use it.

I have no qualms about doing so, however, and I’ll tell you why.

A bit of nerdy dive theory

To understand why the scuba thing is such a big deal on the Apple Watch Ultra, and why I have no qualms trusting it, I’ll need to, just for a moment, nerd out about spending time underwater. If you are scuba-certified, all of this is old news, so feel free to skip ahead.

You may have heard of decompression sickness, or “the bends.” It’s a nasty set of symptoms that can occur when you breathe compressed air at pressure. These days, it comes up most often in scuba diving, but it was originally discovered when workers were working in caves. It can also happen when you travel in unpressurized aircraft, and it’s something astronauts worry about, as well.

In a nutshell: The air we breathe has around 78% nitrogen, 21% oxygen and 1% “other” in it. The oxygen can be a problem — if you breathe pure oxygen at just 6 meters / 20 feet or so under the ocean, it becomes toxic, and you can have a seizure. As you can imagine, that’s bad news when you’re underwater.

However, recreational scuba divers don’t dive with pure oxygen, but rather with compressed, or oxygen-enriched, air. Either way, there’s typically between 78% and 65% nitrogen in the air in scuba tanks, and that’s the gas that causes problems. As you breathe it, the gas dissolves in your blood. Much like a soda bottle under pressure, when the bottle is closed, there are no visible bubbles. Shake it and open it, and suddenly you have a fountain of sticky goo. Your blood is like that when under pressure: Come up from depth too fast, and the bubbles in your blood could come out of solution, which can cause all sorts of nasty symptoms.

This is my “I haven’t the foggiest idea” pose. You’ll see that a lot if you’re following me around on dives. Gear to pay attention to in this photo: I’m wearing my Suunto D9 watch (I’m wearing it with the watch face on the inside of my wrist, because it makes it easy to look at as I’m ascending). You can also see the gauge cluster tucked into my cummerbund, which includes the compass (visible), and on the other side, an air pressure gauge to see how much air is left in my scuba tank and a depth gauge to see how deep I am. Image Credit: TechCrunch / Haje Kamps

A dive computer is designed to ensure that you don’t overload your blood and tissues with nitrogen, and that you surface slowly enough that bubbles don’t form. In short: If you limit how long you breathe at pressure, and if you surface at a reasonable rate, diving is pretty safe.

If you really want to nerd out on bubbles in liquids, start at Boyle-Mariotte’s law, and go from there. #SCIENCE!

Why I trust Apple with my diving

The “so you don’t have to” part is important. When you learn how to scuba dive, you’ll learn how to use so-called “dive tables.” Basically, these were designed by the U.S. Navy for its divers, to ensure that if you stayed, say, 20 minutes at 10 meters depth, you could calculate how long you can dive for your next dive. The problem is that dive tables assume that you keep detailed logs of how long you are at which depth, which you could do, but most divers do not. To be conservative, then, you need to dive a lot less. A lot of people pay good money to go on dive trips, and you don’t pay all that money to sit on a dive boat waiting for the nitrogen to offgas, so a better solution is a dive computer.

People doubting Apple do so because they don’t trust the Cupertino-based giant to do the above accurately, but that’s where I think they are wrong. Apple watches are exceptional at logging things: steps, heart rates, activity; it’s all being logged.

The final piece of the puzzle is the algorithms to calculate how much nitrogen is in your body. This is a little bit complex; some tissues take on and release nitrogen slower than others, and each body is different. If Apple had said that it had designed its own dive algorithms, I’d be highly skeptical. That didn’t happen, though; the company announced that it had partnered with Oceanic to develop an app to take care of that side of things.

Ugh, I miss scuba diving. This photo was taken in a cenote (a cavern system) in Tulum. Image Credit: TechCrunch / Haje Kamps

Oceanic is a well-known, well-respected brand in diving, and they have their own line of dive computers. The company is developing an app — remember how TomTom and Garmin had mapping apps in the early days of smartphones because they were better than Apple at mapping? It’s like that. In today’s Apple event, Oceanic mentioned that they use Bühlmann’s algorithms for nitrogen loading and unloading. You can argue whether or not that’s the right algo to use. Some divers prefer the RGBM algorithm, there’s VVAL, and some dive tables are based on Haldane’s work (although I haven’t seen that one in the wild; it appears to be more of a historical artifact).

Regardless, I trust Apple to make good hardware and log its measurements. I trust Oceanic to create software to keep divers safe. And I trust the algos they’ve chosen to calculate the nitrogen loading.

Does that mean you’re trusting Apple with your life?

The interesting point to make here is that Apple watches rarely fail. But even if they do — or if Oceanic’s app glitches — I hope that they are taking the same approach as most dive computers, which is to fail-safe. For some dive computers, that means a display that just says “malfunction.” For others, they just turn the screen off. As a diver, that can be super scary, but that doesn’t mean you’re going to die.

I’m a PADI-certified divemaster and an SSI-certified rescue diver. That doesn’t make me infallible, but it does mean I’m allowed to lead dives of certified divers. In theory, it also means that I know what I’m talking about, but I’m 99% sure that dive nerds will be able to find a mistake or two in this article. Forgive me, and if you spot mistakes. I dunno, tweet me on my cell phone or something.

Would it hugely suck to have to fall back on a backup plan? Of course. But only because it ruins your day, not because it’ll kill you. Haje Kamps

In my role as a dive master, I usually dive with two dive computers (a Suunto D9 and a Suunto Zoop, if you’re curious). The former looks like a wristwatch and could be worn regularly. The latter looks like a hockey puck. You can wear it around, but you’d look rather silly. Either way, it means that there’s a backup. The reason I do this is that as a dive master, I’m expected to keep an eye on the people in my group. If my dive computer were to fail, it would mean I couldn’t dive any more that day. That would suck. So I will bring a spare. In my hundreds of dives, I’ve never had a dive computer fail — neither my primary nor my backup.

If I were to dive with the Apple Watch Ultra as my primary dive computer, I’d probably have a backup stuck in a pocket of my buoyancy compensator (that’s the vest-looking thing that the scuba tank is strapped to). But even if I did not, if the Apple watch fails somehow, that isn’t, in itself, a truly life-threatening problem.

A huge amount of scuba-diving training is aimed at drills for what you do if a piece of gear malfunctions. Getting safely to the surface is a crucial aspect of that. Without a dive computer, you’re swimming “blind” — but almost every dive setup has a depth gauge as part of the gear. That means that you know how deep you are. Even without that, you can get safely to the surface by “following the smallest bubble.” In other words: Breathe out, look for the smallest air bubble you can find, and go up to the surface as slowly as that bubble. That is generally slow enough to avoid decompression sickness. 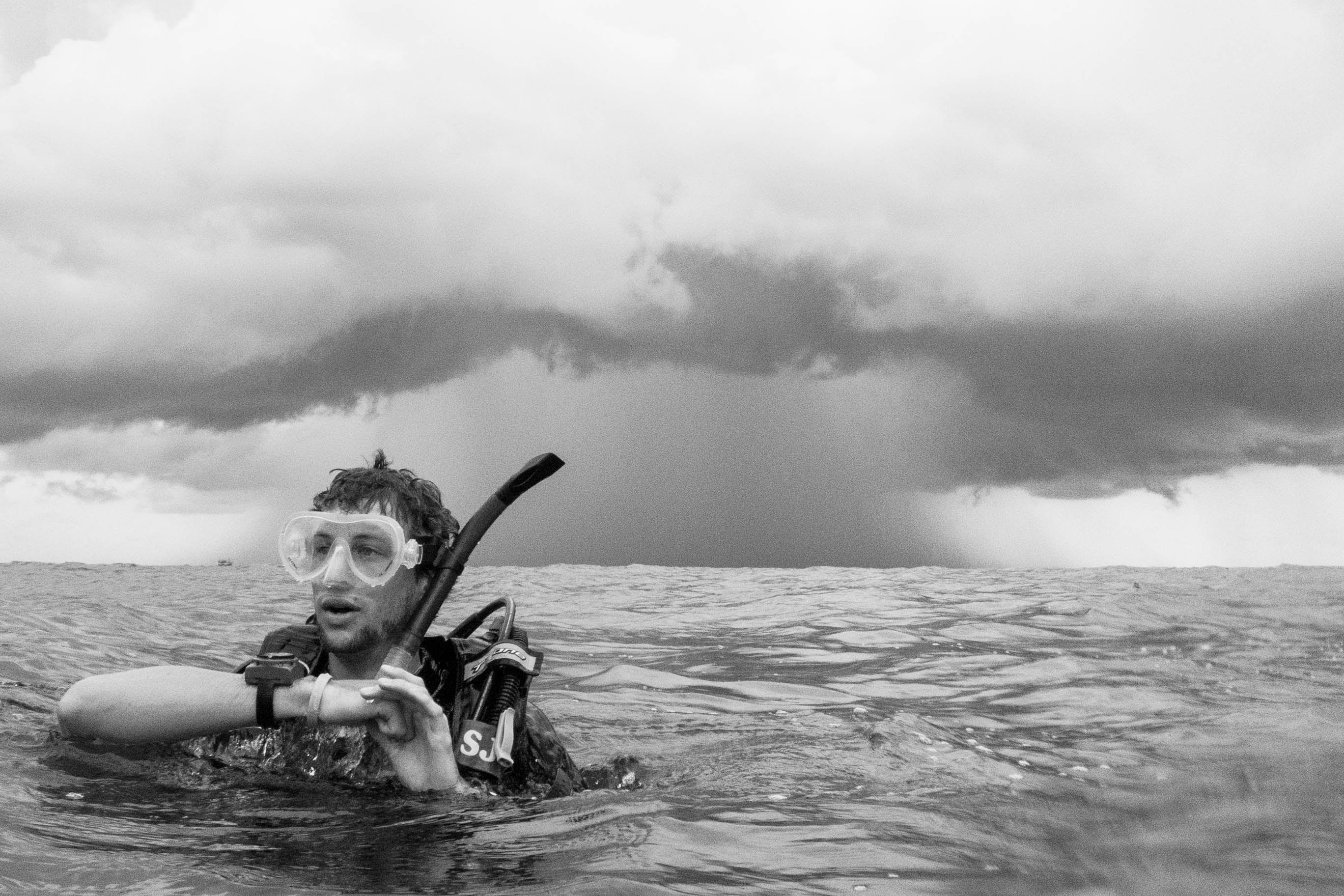 Scuba-dive training includes a lot of skills, including underwater navigation. The less said about my friend Will here, and the 30-minute swim we had back to the boat, the better. Image Credit: TechCrunch / Haje Kamps

The other point here is that most recreational dive certifications include the presumption of a buddy system. That means that for your dives, you dive with another diver that stays with you for most of the dive. You shouldn’t do this, of course, but if your dive computer fails, it’s not completely unreasonable to trust their computer to be a relatively close mirror of your own dive profile. Pad that with a bit of extra slowness and care, and you’ll probably make it safely to the boat. And, of course, even if your dive buddy doesn’t have a computer that works, your dive master probably will, so they can act as a proxy for your nitrogen-loading if needed. You shouldn’t, it isn’t recommended, and it doesn’t matter: The point I’m making is that you’ll probably make it safely back to the boat.

Now, would it hugely suck to have to fall back on any of the backup plans? Of course it would suck. But only because it ruins your day, not because it’ll kill you. At that point, you’ve trusted your dive computer to keep you safe. Without it, you don’t know how much nitrogen is in your body, which means the end of the diving day for a conservative diver. It sucks, especially if the malfunction happened on dive one of a five-dive day, but it doesn’t inherently mean that your life is at risk.

This is why I trust Apple: It’s one of the best hardware manufacturers in the world. Implementing some pretty basic instrumentation (time and a pressure gauge) into a device will probably be just fine. If I’m leading a dive, I’ll have a backup with me, but even if I do not, I’ll have a dive buddy with me, and a dive master. And even if I have no other equipment with me at all, the worst-case scenario is that I miss a day of diving.

Now I just need to convince TechCrunch to let me go and chill out in Sipadan for a week to go hang out with a bunch of tropical fish. I promise to give the Apple Watch Ultra an exceptionally thorough review.