Facebook and Instagram may be busy trying to clone TikTok within their own apps as Reels, but a new feature rolling out now from TikTok will see the short-form video app’s content showing up in more places across Meta’s social networking platforms. TikTok confirmed to TechCrunch it’s launching a new sharing feature that will allow users to publish their TikTok Stories — a feature it has been piloting since last year — to rival social networks, including both Facebook and Instagram.

The feature only recently began rolling out to TikTok users, the company said, so you may not see the option in your own app just yet.

The move could give TikTok’s content increased visibility on Meta’s platforms, as the tech giant has been working to downrank recirculated TikTok videos in Reels. Specifically, Meta advised its creators that it would prioritize original content on Reels across Instagram and Facebook, noting its algorithms would be on the lookout for watermarks — like the one TikTok includes on its videos, for example.

Reposting TikTok Stories, however, could be a new way for TikTok creators to share their work with followers on other social networks — without having to compete for attention with Reels.

The feature, first uncovered in changes discovered by product intelligence firm Watchful.ai, introduces a new sharing interface for TikTok Stories. Previously, users could share their TikTok Stories directly with TikTok friends by tapping their profile picture in the share sheet that pops up when you click the three-dot menu on a Story. The same interface also allows users to save the videos to their device, delete it or change its privacy settings.

Now, this sharing option will include a row of popular social apps, as well as an option to copy a link to the video, according to images provided by Watchful.ai and confirmed by TikTok. 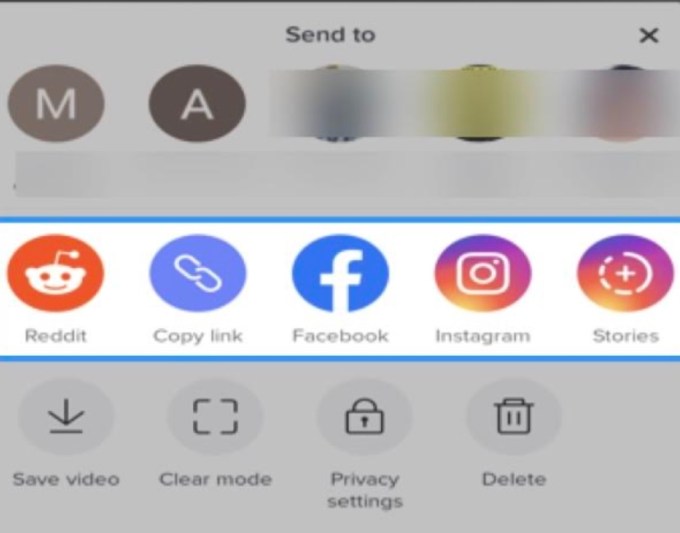 TikTok Stories wouldn’t be a good fit for Reels anyway, as they tend to consist of more casual or personal posts, or Q&As between the creator and fans (e.g. “Ask Me Anything”) — the same sort of content you often see on Instagram Stories. But the new feature could be a way for a creator who primarily publishes to TikTok to reach followers who more often use other popular social networking apps, with little additional effort required on their part.

TikTok did not confirm when the feature would fully roll out to its global user base. However, we should note that TikTok Stories itself is still in global testing. Given that it’s not a fully launched product, features such as this new sharing option may or may not roll out to the app to all users, or they may be changed by the time the product is launched publically.