NASA engineers have completed final tests of the Space Launch System (SLS), clearing the way for the mega moon rocket to roll out to the launch pad today instead of Friday as originally planned.

The space agency was able to move up the date for the rollout — when a transporter-crawler moves the 322-foot-tall SLS from the Vehicle Assembly Building to launch pad 39B at Kennedy Space Center — because it completed key tests of the rocket’s flight termination system (FTS). The FTS is a critical series of components that ensure a rocket can be safely destroyed after launch in the case of a major failure. Testing of the FTS was “the final major activity” on NASA’s pre-launch to-do list, the agency said. 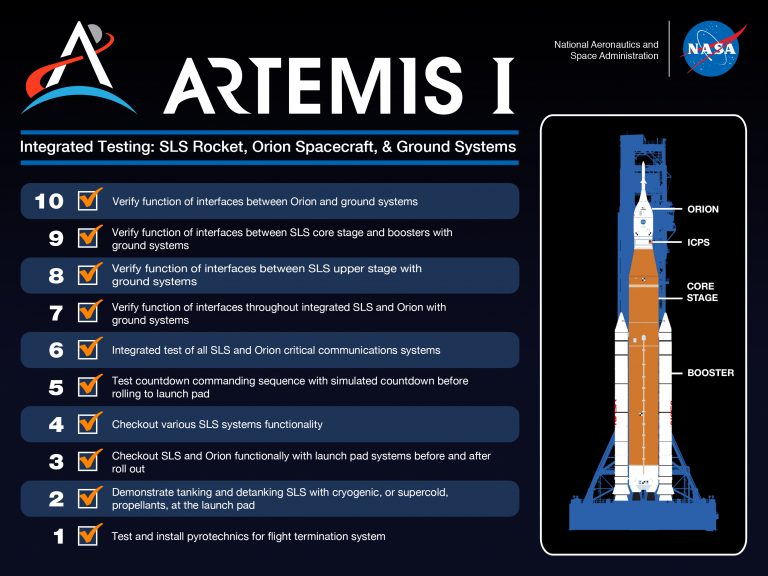 Testing and installing the FTS was last on the list because the system starts a proverbial “clock” of around 20 days for launch. If launch does not occur within this period, the system must be retested. This time frame is set by the U.S. Space Force and by the FTS’s own battery system. NASA was able to get an extension from Space Launch Delta 45, the USSF unit that has jurisdiction over launches on the east coast, from 20 days to 25 days.

That means NASA is on track for a first launch attempt of the Artemis I mission on August 29. Thanks to the extension, NASA can now make backup launch attempts on September 2 and September 5.

Artemis I is the first in a series of planned launches aimed at returning humans to the moon for the first time since the Apollo era. The primary goal is to test the Orion spacecraft and ensure it can safely carry humans. (SLS is not reusable, so while a successful launch will surely give engineers plenty of confidence about the rocket, it will not make a second flight.) During the mission, Orion will journey around the moon before conducting a reentry and splashdown back on Earth.

The next flight in the manifest, Artemis II, is scheduled for 2024. This mission will carry humans, though they won’t touch down on the moon. That privilege will go to the next cohort of astronauts, which will include the first woman and person of color to go to the moon, during the Artemis III mission scheduled to launch in the middle of the decade.

Today’s rollout is expected to take around 11 hours. Click on the video above to watch it live.