A new app for iPhone users can help you browse the web without being constantly bothered by pop-up panels that beg you to use the company’s app instead. The app, called Banish, is a Safari extension that helps remove the “open in app” banners from various websites and other popups that block content across a number of sites, like Reddit, TikTok, LinkedIn, Twitter, Quora, Medium, Yelp and some Google sites, to name a few.

While there are a number of similar Safari extensions for blocking cookie banners and ads, the scourge of the “Open in App” banners is often not addressed by existing solutions. It’s unfortunate that using the mobile web today requires so many interventions, but that’s the state of things. It’s also possibly a contributing factor as to why people are now spending four to five hours per day in their apps.

Developer Alex Zamoshchin says he was frustrated by the problem, too, as he felt people shouldn’t have to use a company’s app if they don’t want to. Taking inspiration from a similar cookie blocking extension, Hush, he created Banish.

The app was recently featured on Product Hunt and highlighted by the popular Apple blog Daring Fireball.

To use Banish, you’ll first install the app to your iPhone, then configure it in the Settings. This involves a few key steps for Banish to function properly. There are two places where Banish needs to be enabled, under Safari Extensions — you need to toggle on the switch next to Banish under “Allow These Content Blockers” and “Allow These Extensions.” Then you need to set the “Allow” permission to “All Websites” below. 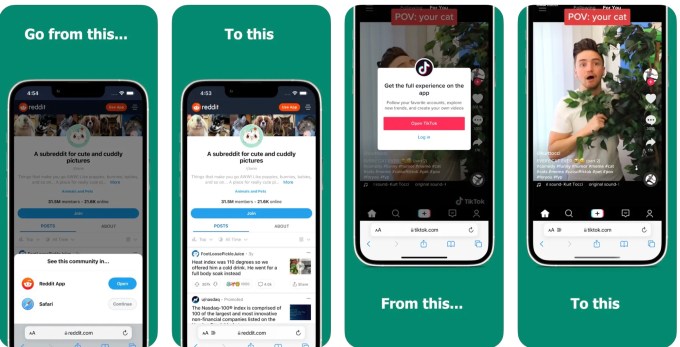 Once enabled, Banish can help you avoid pop-ups in many cases. But the app can’t eliminate all the “open in app” distractions.

For instance, we found clicking Reddit links would sometimes open in Safari and other times open the native app when we tested it. The developer explained the Reddit app doesn’t consistently use deep links (links that open directly in apps) for all its pages. So while some pages would correctly deep link, others — like Reddit’s Topic pages — would not. We also had to set links to open in Safari by default. The solution was to long-press on the Reddit.com link you want to view, then tap on the option from the menu that appears to open the link in Safari. This will change the default action for Reddit links going forward, Zamoshchin says.

Another issue Banish can’t solve is with those “Open” links that are baked into Safari, like the ones that appear at the top of the page when you visit Instagram.com, for example. That’s a different type of banner than the ones this app was built to address. (If you don’t want to see these, you can uninstall the app from your iPhone.)

There were a few other quirks, as well. LinkedIn, for example, still showed a login box in Safari rather than immediately taking you to the person’s LinkedIn profile, if you were logged out when you visited the site. But that’s just how LinkedIn works. And while Twitter browsing is much easier, its website still includes Login/Signup buttons at the top of the screen and the same sort of baked in “Open” app button that Instagram.com offers at the top of the page. But, again, these are issues that are beyond Banish’s scope.

Still, in other ways, the app proved incredibly useful. For instance, when on Quora, clicking a link to another Quora page would normally pop up a blocker that requires you to log in to continue navigating the website. With Banish, this pop-up was gone and you could use the site normally.

The app is available for download on the App Store for a $1.99 one-time fee. It’s currently the No. 2 app on the Top Paid apps chart in the Utilities section of the App Store.