CircleCI, the popular continuous integration and delivery (CI/CD) platform, today announced a partnership with GitLab, the popular DevOps platform that also offers an integrated CI/CD service. That may seem like a bit of an odd match-up at first, but CircleCI argues that by providing support for GitLab SaaS customers, it can help those users manage software changes anywhere in the software ecosystem.

Specifically, this means developers can now trigger pipelines in CircleCI from GitLab forked merge requests, for example, and CircleCI will be able to provide performance and health metrics to its customers on GitLab SaaS, all while also benefitting from CircleCI’s permission models and existing toolchains.

“When we launched 11 years ago, the only flow that people really cared about was: a developer makes a change in code, they commit, they push. That was all that existed,” CircleCI CEO Jim Rose said. “And over the last 11 years, it’s just metastasized into all these other things.” 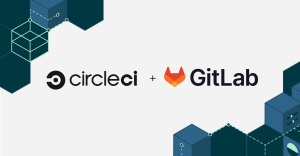 He acknowledged that for some users, simply using something like GitLab’s own end-to-end solution will work just fine for them. “That’s great for them,” he said. “I think in most situations, what we have found is that due to the complexity of the number of [version control systems] and due to the complexity of the number of deploy targets — most people we talk to are multi-cloud — you end up with a bit of a mishmash in the middle. And so we find our sweet spot is if you’re running multiple [version control systems] and multiple sources of change and you’re running multi-cloud, you may not benefit from attaching your build system to only one of those endpoints and then trying to stretch it out. Instead, what we try to do is go in as an agnostic broker and that allows you to make some of these different decisions individually.”

For CircleCI, it’s this focus on being the one service to manage code changes, something that becomes even more important as we’re moving to a world where an increasingly large part of a company’s infrastructure is managed by ‘[x] as code’ services, that allows it to occupy this neutral position where it can both partner and compete with the likes of GitLab, GitHub and Atlassian.