Conversational commerce isn’t exactly a new phenomenon, with countless companies using live chats, messaging apps, chatbots, voice assistants and more to encourage consumers to part with their cash. As part of that broader movement, the mighty WhatsApp, a dominant force in the messaging world, has been pushing deeper into the business arena with myriad tools to connect retailers with customers — from product catalogs and collections, to shopping carts and Instagram Shops integration.

The conversational commerce market is fairly substantial too, with China’s WeChat reportedly facilitating $250 billion in transactions in 2020 alone. But while shopping from within messaging apps is par for the course in many markets around the world, particularly in Asia and Latin America, it hasn’t quite taken off to the same level in Europe — and this is something that German startup Charles wants to change with a platform that meshes key conversational commerce components with the marketing prowess of newsletters.

Two years on from its launch, Charles today announced that it has raised $20 million in a Series A round of funding led by Salesforce Ventures, with participation from Accel and HV Capital. This follows a $6.5 million seed round of funding it raised last year.

Founded out of Berlin in 2019, Charles pitches itself as a full, end-to-end product spanning backend and interface, connecting the APIs from messaging services such as WhatsApp with popular e-commerce and CRM (customer relationship management) systems like Shopify and Salesforce. Then, businesses can sell products, send newsletters and offer follow-on support. 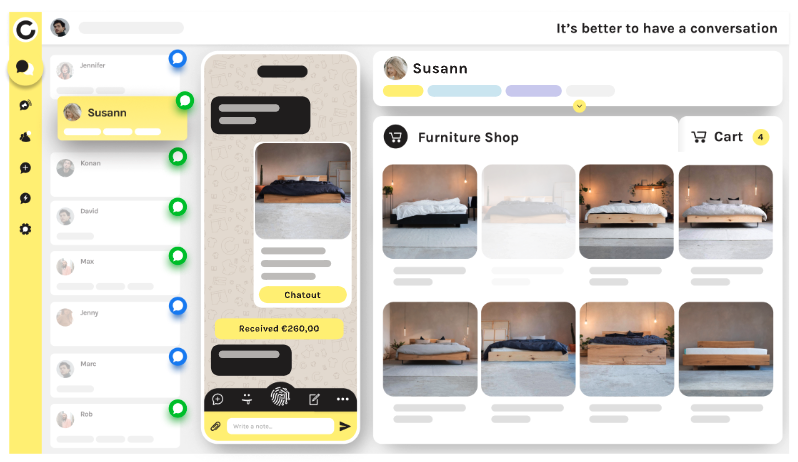 While the sales and service aspect is to be expected from any conversational commerce software, the newsletter facet is an interesting addition. A WhatsApp newsletter might include a discount, special offer, product announcement or video message — but importantly, it’s designed for the medium on which it’s being consumed (i.e. a messaging app) rather than traditional email format.

Newsletters are essentially one-to-many “broadcasts,” except when accessed through the API businesses can send to an unlimited number of recipients at once — standard broadcasting in WhatsApp is limited to 256 people. On top of that, retailers can use the Charles platform to create automated opt-in flows (e.g. through clicking a button or scanning a QR code on a website), with access to performance analytics to show how a WhatsApp newsletter is growing in terms of engagement. 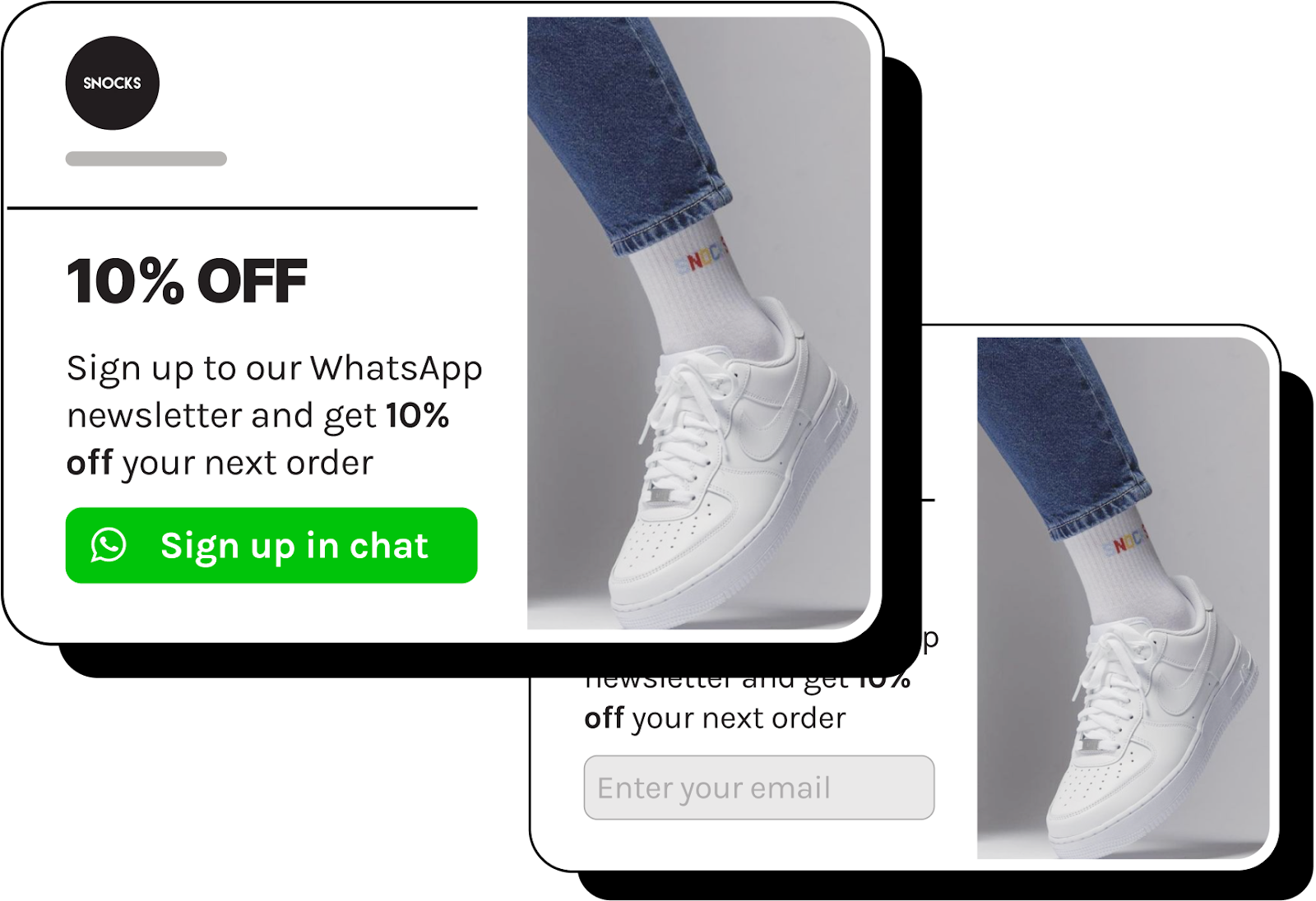 This hints at how Charles is looking to differentiate — it wants to replicate the success of these other companies in markets closer to home. And this is what its fresh $20 million cash injection will be used for, as it looks to broaden its horizons beyond its native Germany.

One point worth noting is that Charles has specifically built its platform with Europe’s data privacy laws (i.e. GDPR) firmly in mind. With WhatsApp newsletters, for example, Charles presents double opt-ins for customers after they indicate that they want to receive WhatsApp messages — so the customer may ask to sign up for the newsletter (first opt-in), and then they are asked a second time to confirm that this is what they want. And all of this is automated.

“Targeting Europe, one of our main differentiators is the fact that we have built-in GDPR compliance from the get-go,” Charles co-founder and co-CEO Artjem Weissbeck told TechCrunch. 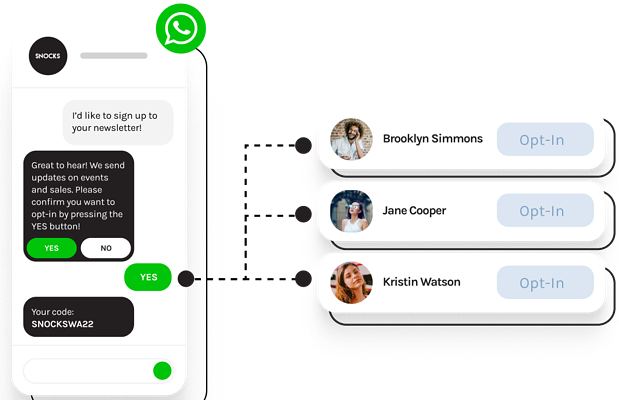 Not everyone will be happy to have targeted marketing and advertising landing in their WhatsApp inbox every day, and that is why Charles is focusing on the opt-in / opt-out workflows. It’s not the same as email, and it needs to be treated accordingly.

“To be GDPR-compliant, brands need an initial opt-in from you for notifications, while an opt-out is possible at any time,” Weissbeck continued. “That’s also why we help brands with our automated opt-in and opt-out technology, and our success team advise them on frequency and relevance of notifications. Contrary to email, they should be low-frequency and high-relevance to respect the intimacy of the channel and keep the trust provided by the consumer. On average this means one to two campaigns per month.”

Although Charles has seen the most traction in its domestic German market, it has already seen some inbound interest from Italy, Spain, France, the Netherlands and the U.K. And longer term, it sees itself extending to markets elsewhere.

“These are the countries that we’ve started to expand into, and more than 20% of our customers come from there — particularly Italy and the U.K.,” co-founder and co-CEO Andreas Tussing added. “Our ultimate ambition is global, and we selectively pilot with companies outside of Europe.”

In its relatively short life so far, Charles said that some of its one hundred-plus customers have already hit seven-digit WhatsApp revenues this year, representing up to 40% of their overall sales. But Charles is cognizant of the fact that while WhatsApp is a preeminent messaging platform in Europe, it’s not the only player in town — that’s why it supports Instagram Direct and Facebook Messenger too, while it’s also working on support for Telegram, iMessage, RCS, Google MyBusiness Chat and SMS.

“However, most businesses in Europe focus on WhatsApp as consumer penetration is the highest, rich formats are advanced, and API capabilities for businesses are most advanced,” Tussing noted.