If you thought of the age of companies launching real-time audio chat apps was over, think again. Swedish caller identification service Truecaller is today launching a new app in the space called Open Doors.

The company’s unique selling point is in its name. Open Doors, essentially, has fewer structural roadblocks than Clubhouse or Twitter Spaces: no rooms, no invites, no recording tools, nor even extensive moderation features.

You can start a conversation at any point, and all the folks in your contact list, who also have the app installed, will get a notification to join. Once your friend joins, their contacts will also get the notification, and the cycle continues till the end of time. You can also invite someone to join the conversation through a link that you can share on social media platforms. 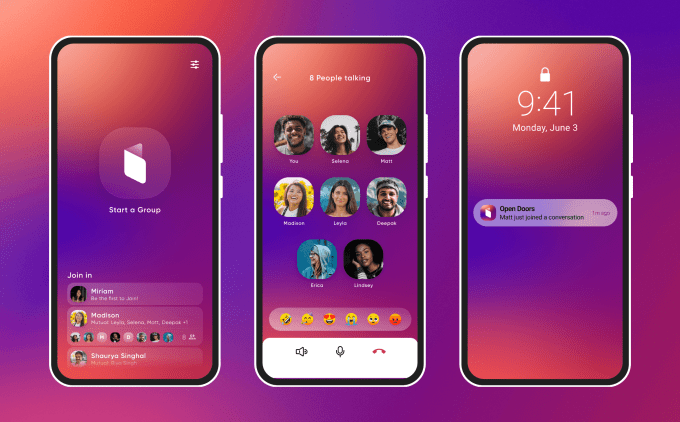 Truecaller was quick to point out that the app scans your contact library locally and none of the data is transferred to its servers.

“Thanks to Truecaller being 13 years in the business, we’ve spent a great deal of time learning about how people communicate. One of the reasons that we built this app was that we built something similar in Truecaller in 2018. But it was just a demo, and we never launched it,” Nami Zarringhalam, co-founder of True Software, Truecaller’s parent company, told TechCrunch in an interview.

“The journey of building this product stems from a very basic idea of recreating experiences like meeting at a cafe or a watercooler, and recapturing that act of having casual conversations online.”

Notably, Open Doors doesn’t have any moderation tools, either. There’s no limit to how many people can join a conversation, so it’s hard to predict a conversation’s direction if hundreds of people have joined in. But Truecaller said that it’s thinking about introducing a limit.

One way to control a conversation is to mute someone, but then, they have the power to mute you, too. It’s a pretty confusing situation, as everyone can mute everyone else. 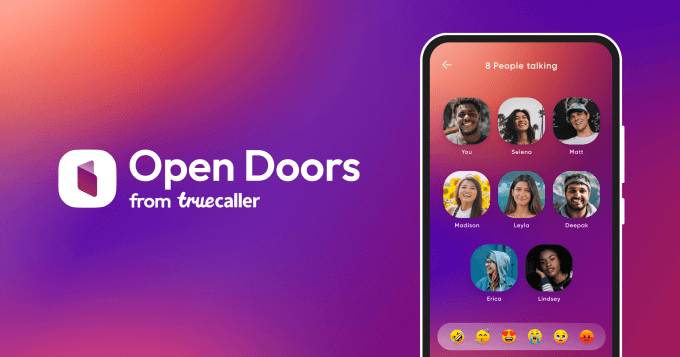 “This is a good way to block out the noise and keep a meaningful conversation going as no one really owns a room,” Zarringhalam said.

Zarringhalam equated this situation to a party where you engage in a meaningful conversation. But at parties, we can concentrate on a person’s voice who’s standing next to us. This might not be possible if you could hear all the folks present in the room at the same volume.

This sounds like a moderation nightmare, and hopefully, Open Doors will be able to solve these problems in a better way in due course. More importantly, there’s a chance that a user gets turned off by this whole ordeal and uninstalls the app.

The app is available for free on iOS and Android in all countries at launch except China and Russia. Apart from English, the app also supports other languages, including Hindi, Spanish, Latin and French. The platform will be ad-free, and the company doesn’t have any plans for monetization at the moment.

The company is already working on some new features for the app that’ll be shipped soon. These include the ability to set a close friends circle for a private live-audio session, more granular notification control and emoji reactions. It said that it’ll work on features like recording or transcription if the community demands it. Well, that’s what happened with Clubhouse right?

In the last few years, after Clubhouse shot to fame, all major platforms — including Twitter, Discord, LinkedIn, Spotify and Facebook — launched their own version of the live audio solution.

During that time, people were locked up in their houses and wanted to recreate a synchronous experience of talking to people that they were missing. Now, we’re meeting people face-to-face and in-person events are a thing again.

Over time, interest in this format has diminished. Last month, Clubhouse laid off some of its workforce as it is “rethinking” its strategy. In April, Spotify shut down its live audio creator program, the Greenroom Creator Fund. According to data from Sensor Tower, downloads for social audio apps Clubhouse, Spoon and Stereo have gone down from 18.7 million in Q1 2021 to merely 3 million in Q1 2022.

For True Software, it’s also about launching another successful app beyond Truecaller. Last year, the firm launched a safety app called Guardian, but it never took off. The firm also went public on Nasdaq Stockholm at an opening price of 52 Swedish Krona ($4.91). After achieving a high of 143.20 Swedish Krona ($14.11) late last year, the stock price is currently hovering around its opening levels.

To promote the new app the company wants to leverage its network of more than 310 million users on the main app to lure them to the new app. Truecaller will indulge in a massive marketing campaign for Open Doors on its main app and other means, like online ads, too.

Beyond that, it’s banking on the fact that you will be continuously curious about what your friends are talking about, and will keep coming back to the app to find that out and join those conversations. And that could be the app’s biggest challenge.