Relativity Space will be sending OneWeb’s second-gen broadband satellites to orbit starting in 2025 using its fully reusable 3D-printed rocket Terran R, under a new multi-launch agreement. This is the fifth customer for Terran R, and the only one that has been publicly named, bringing the total value of all binding launch agreements for that rocket to more than $1.2 billion.

It’s a high degree of customer conviction in Relativity, which has yet to send even its first rocket, the small, fully expendable Terran, 1 to orbit.

“To have such large contracts signed before launching, and before even launching Terran 1, I think is really speaking to the confidence that people have in the team and in our approach,” Relativity founder and CEO Tim Ellis told TechCrunch.

While Relativity declined to share the financial terms of this specific deal, the company did confirm that the agreement is for a number of launches in the double-digits. Given that Relativity will be deploying OneWeb’s Gen 2 satellite network under a primary deployment contract — meaning this is what will get the Gen 2 network up for the first time — they’ll likely work fast.

“We keep hearing from customers that there needs to be a second, quickly moving, disruptive launch company that has low prices, is reliable and is able to scale production quickly and actually serve what is now becoming an even more kind of supply-constrained market,” Ellis said.

The road to launch

To meet the 2025 deadline with OneWeb, Ellis said Relativity will likely conduct the first orbital flight test of Terran R around the end of 2024 or the beginning of 2025. That means these launches for OneWeb will be some of the first Terran R conducts for commercial customers.

OneWeb had to scramble to find alternate launch arrangements after it said it would no longer use Russia’s Soyuz rockets, a direct result of the series of sanctions imposed by much of the Western world after Russia’s invasion of Ukraine in February. The company quickly signed launch deals with SpaceX — a competitor — and New Space India. Those agreements will send OneWeb’s first generation satellites to orbit, a company spokesperson told TechCrunch. But talks between OneWeb and Relativity preceded the war, Ellis said.

“We were talking to them well before the Russia-Ukraine conflict erupted. This has been in the works for quite some time.”

OneWeb aims to achieve global service with its broadband satellite constellation from 2023, when the number of satellites in orbit reaches 648.

Terran R is the company’s larger rocket made to serve medium- and heavy-lift markets, with a 20,000-kilogram payload capacity. Although that’s less than SpaceX’s Falcon 9 on paper, which has a capacity of 22,800 kilograms, Ellis noted that if Terran R’s second stage was expendable (like Falcon 9’s), its payload capacity would be over 30,000 kilograms. Terran R is also higher than Rocket Lab’s next-gen rocket Neutron which will have a max capacity of 15,000 kilograms.

Like its smaller sister, Terran 1, Terran R is fully 3D-printed. Unlike Terran 1, however, it is designed to be fully reusable. Both rockets will eventually use Relativity’s fully 3D-printed engine, the 250,000-pound-thrust Aeon-R. Ellis said there will be more Aeon-R engines on the first stage of Terran R than previously announced, though he didn’t give a specific number.

Both rockets are made using what is the company’s strongest weapon: Stargate, its line of 3D printers. The company has just launched the fourth generation of Stargate, which Ellis said can print up to 10 times faster than the previous generation. But just how fast is that? At the current rate they’re demonstrating, a Stargate can print a Terran 1 fuselage in just five days. 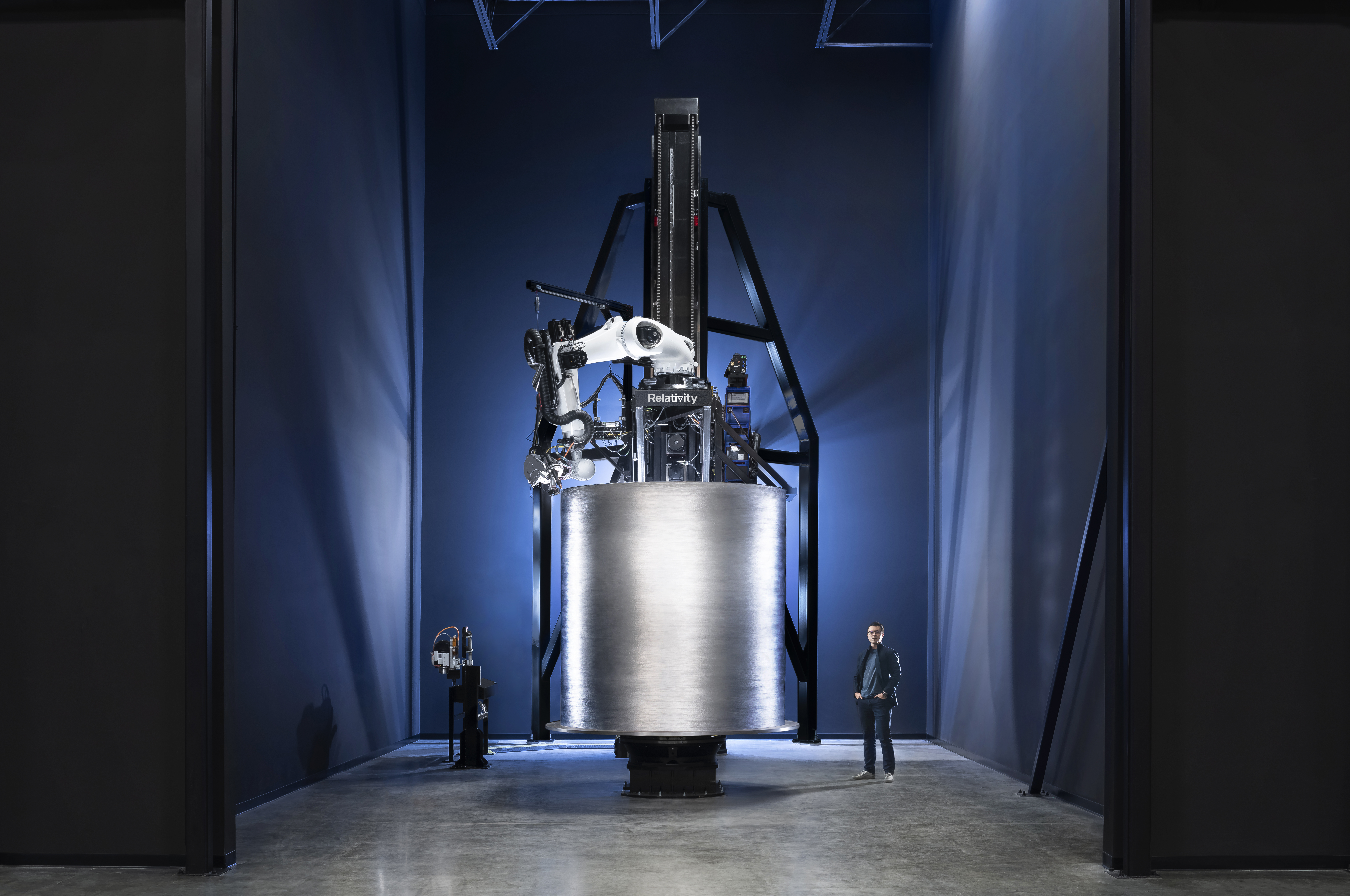 “That’s been a really big enabling technology to be able to go as fast as we have been,” he said.

They also have the capacity to print an even larger rocket than Terran R, even one potentially comparable of SpaceX’s Starship. “With the 3D-printing tech we can definitely adapt and I think if things change, then we can certainly build something larger.”

But, he added, he’s not opposed to being a customer of Starship, either. “Our long-term mission remains that we want to help build an industrial base on Mars and helped make humanity multiplanetary.”

The story was updated to include more details about OneWeb and to clarify a comparison between Terran R and Falcon 9 payload capacities.