Apple is giving the iPhone’s Lock screen a big makeover in iOS 16. At Apple’s Worldwide Developer Conference, the company introduced its plans for a more personalized Lock Screen that users can customize via a built-in editor, which offers widgets, a wallpaper gallery and colorful themes. It’s also introducing a new feature called Live Activities that will allow developers to build out live-updating Lock Screen widgets that include real-time information.

Previously, widgets were available in the “Today View” to the left of the Lock Screen. With a swipe to the right, iPhone users could keep track of news, weather, calendar appointments, stocks and more in a customizable view. Now, widgets will be available directly on the Lock Screen itself.

In the new Lock screen, users will be able to update this key iOS real estate via a new editor that, when tapped, takes you into a mode where you can swipe to try out different themes and styles. These styles can automatically change the color, filter, background, and font — all of which are designed to coordinate with each other. Using this feature, users can try out different typefaces and pick from different colors.

Photos used on the Lock Screen will also see a new multilayer effect, says Apple, where the subjects of photos are set in front of the time on the Lock Screen, creating a sense of depth. Users will also be able to change the look of the date and time itself with different styles and color choices. 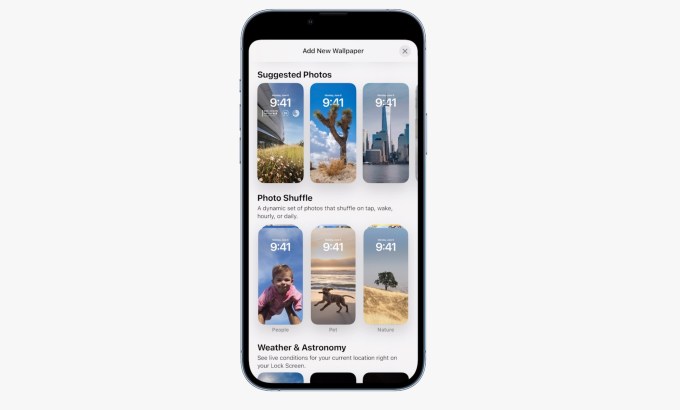 In addition, users can make their Lock Screen more helpful by choosing new widgets from an available widget gallery.

These features allow users to view information at a glance — like upcoming calendar events, weather, news, battery health, alarms and more. One option, called Photo Shuffle, lets your choose from a set of photos to shuffle throughout the day. Apple offers suggested photos intelligently curated from users’ personal libraries, as well.

From a new Lock Screen gallery, users can also browse through a selection of Apple collections, where they can pick from pre-configured themes, like a Pride and Unity theme. Another option lets users preview the weather conditions, with a live Weather wallpaper that shows things like lighting or a downpour. An Astronomy wallpaper offers views of the Earth, moon, and solar system. Users can also create Lock Screens with their favorite emoji or color combinations, Apple said.

Users can configure a number of different Lock Screens, too, which they can save and then later switch between.

Developers, meanwhile, can build for the Lock Screen via WidgetKit, which allows them to build customizable, glanceable information for this part of the iOS 16 experience.

With the changes, Apple is also introducing something it’s calling Live Activities, which helps you stay on top of things that are happening in real-time, right from the Lock Screen. Developers will be able to access this via the Live Activities API, which is used to create these glanceable experiences.

Apple suggested how these Live Activities could be used — for example, for staying on top of sports game scores, or tracking an Uber ride, a workout and more. One would allow users playing music to access playing controls that could expand to a full-screen view, making the widget a more interactive experience. These would coexist alongside the other Lock Screen elements, Apple explained.

In addition, Apple’s new Focus Mode will be updated to be customizable via the Lock Screen. That is, users can customize a Lock Screen for a given Focus Mode. That means while at work, you could have widgets focused on things like Stocks or your work Calendar, for instance, while in your personal time you may update the screen with different widgets and family photos, perhaps. The wallpaper can change with different Focus Modes, too.

Notifications will also now roll out from the bottom of the Lock Screen, instead of cluttering them, in order to keep the main widgets and features in clear view.

The new Lock Screen will release with the updated iOS 16 operating system arriving in the fall.