Seattle-based Zeitworks, which is launching its private beta today after raising a $4.5 million seed round in 2020, wants to give enterprises data-driven tools for improving the productivity of their teams and streamlining their business operations. That’s a market that’s seeing quite a bit of growth right now, especially given how the pandemic has made remote work a standard business practice and how the overall talent crunch is forcing many businesses to do more with fewer employees. The overall idea here is to give businesses better insights into how teams work and where there are opportunities for improving business processes beyond simply using automation.

“The problem that we’re really addressing is that there’s teams and companies in just about every industry who execute all kinds of repetitive business processes every day– and to be clear, it’s business processes executed by humans,” Zeitworks CEO and co-founder Jay Bartot told me. “Think about processing bank loans or insurance claims or HR onboarding of new employees, moving information from system to system. Oftentimes, those systems aren’t interconnected or don’t have APIs. The problem that we’re solving is that the majority of these processes can’t be optimized because they’re undocumented and unmeasured. They’re just not understood.”

Unsurprisingly, understanding these processes is at the core of Zeitworks’ product. But since these processes aren’t documented, you can’t exactly build a rule-based engine around discovering what people are doing. Instead, the company uses an AI-driven task mining system that uses signals from a wide variety of sources, mostly with a focus on the desktop applications these users interact with during their daily work. Bartot actually noted that he prefers the term “process intelligence” over “task mining,” given that task mining tends to be associated with creating RPA bots more than empowering teams and helping them work better. 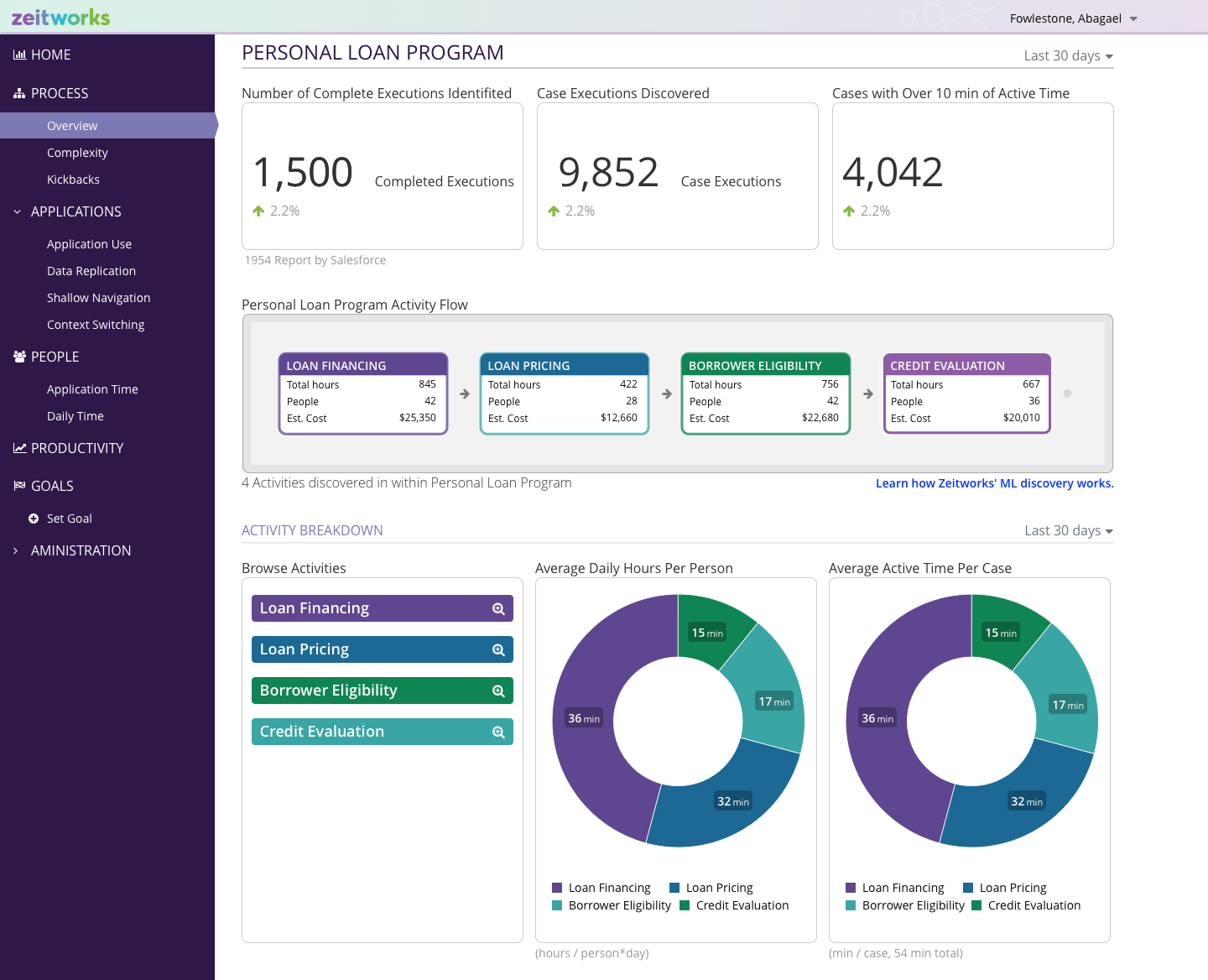 Now, in order to do all of this, Zeitworks has to run its agent on an employee’s desktop and those users’ daily work is then tracked with quite a bit of granularity. Microsoft, with its Productivity Score, does something similar, but the company also faced quite a bit of backlash over it, given that managers could drill down to the individual employee and see how many emails they sent, chats they participated in, etc. The company later made some changes that put the focus more on the organizational level and away from individual users.

“In our world, the kinds of productivity scores that we are recording are around this repetitive work — the fact that people are processing bank loans or you know insurance claims repeatedly is a fundamental part of what we’re measuring and what we’re doing with pattern recognition,” Bartot explained when I asked him about the potential for backlash. “So the productivity scores are really geared towards that specific kind of repetitive work. I think in the case of Microsoft and other tools that we see out there also in the productivity space, when you’re measuring across many different types of workers up and down the worker stack from the highest level knowledge workers all the way down to kind of digital laborers, I think it’s more challenging to come with something that is useful and something that would make sense to people.” He believes that because his company has a very different kind of focus, its scores will be more useful and acceptable to users.

Looking ahead, Zeitworks is starting to build out its go-to-market capabilities now that it has proven its system with a number of pilot customers. The company is also working on getting its SOC 2 certification. 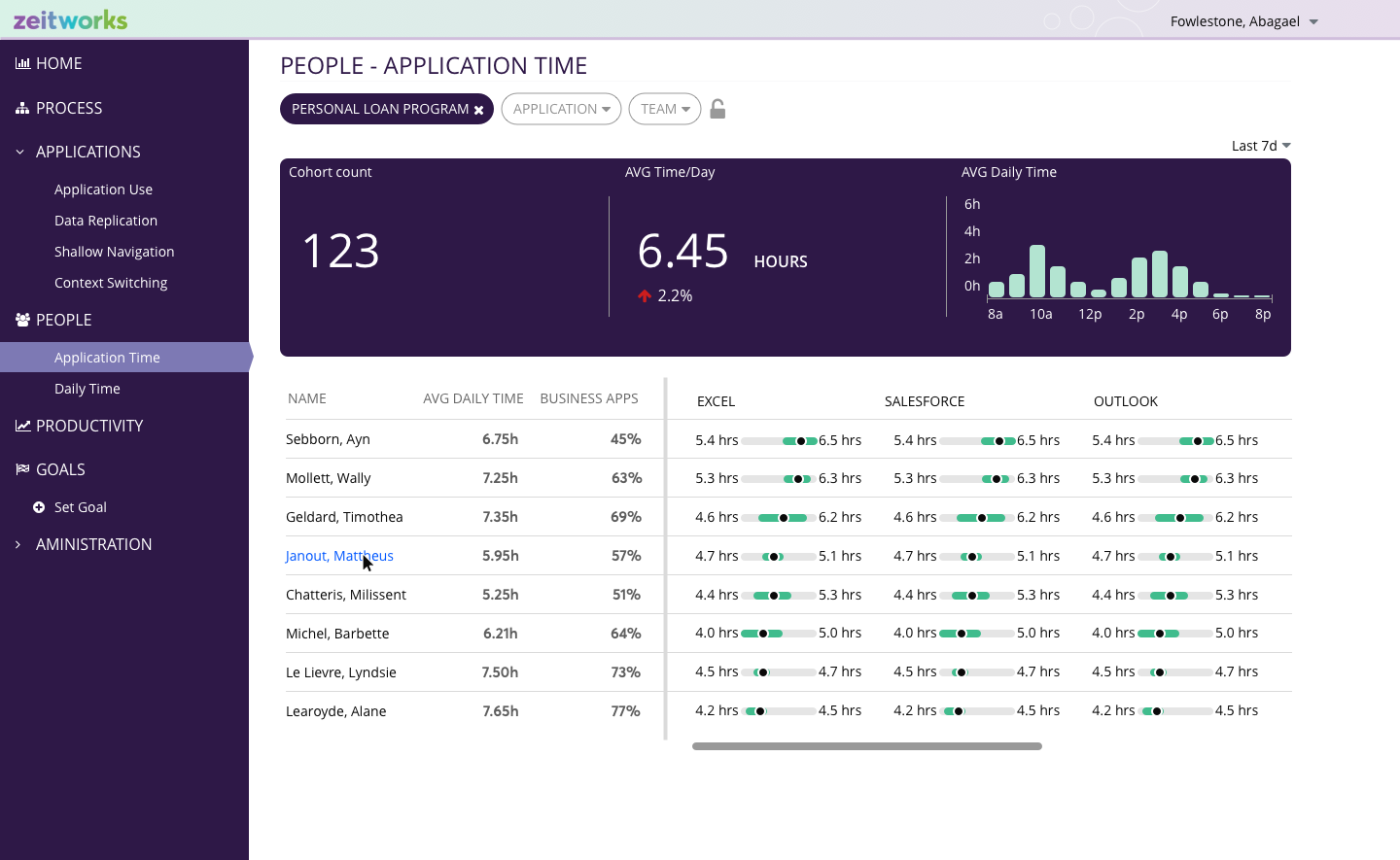