In addition to improving Google Assistant’s ability to communicate with users in a more natural way, Google today announced improvements to its Google Translate service. The company said it’s adding 24 new languages — including its first indigenous languages of the Americas with the additions of Quechua, Guarani and Aymara.

Other additions include the following: 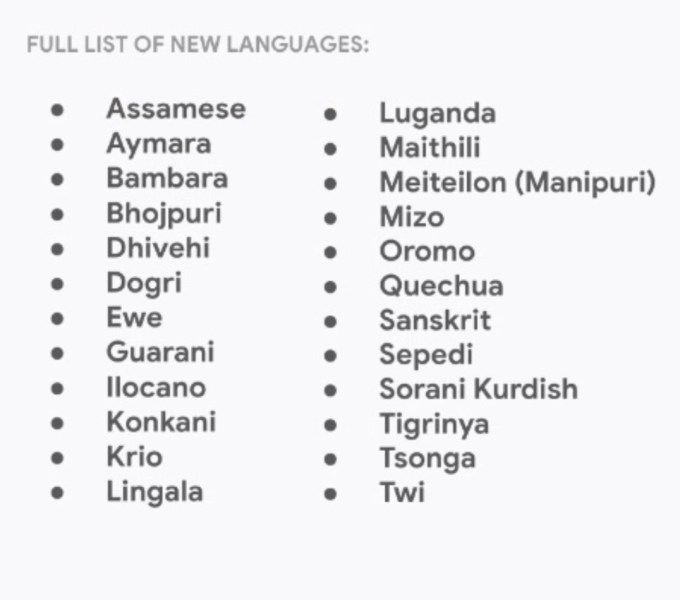 In total, the 24 new languages are spoken by more than 300 million people worldwide, Google said.

“This ranges from smaller languages, like Mizo spoken by people in the northeast of India — by about 800,000 people — up to very large world languages like Lingala spoken by around 45 million people across Central Africa,” said Isaac Caswell, a Google Translate Research Scientist.

He added that in addition to the indigenous languages of the Americas, Google Translate will support a dialect of English for the first time with Krio from Sierra Leone. The company said it selected this newest batch of languages to support by looking for languages with very large but underserved populations — which were frequently in the African continent and Indian subcontinent. It also wanted to address indigenous languages, which are often overlooked by technology.

Google’s ability to add new languages has improved thanks to technological advances taking place over the past few years, Caswell said.

“Up until a couple of years ago, it simply was not technologically possible to add languages like these, which are what we call a low resource — meaning that there are not very many text resources out there for them,” he explained. But a  new technology called Zero-Shot Machine Translation has made it easier. “At a high level, the way you can imagine it working is you have a single gigantic neural AI model, and it’s trained on 100 different languages with translation. You can think of it as a polyglot that knows lots of languages. But then additionally, it gets to see text in 1,000 more languages that isn’t translated. You can imagine if you’re some big polyglot, and then you just start reading novels in another language, you can start to piece together what it could mean based on your knowledge of language in general,” he said.

The expansion brings the total number of languages supported by the service to 133. But Google said the service still has a long way to go, as there are still some 7,000 unsupported languages globally that Translate doesn’t address.

The new languages will be live today on Google Translate, but won’t reach all users worldwide for a couple of days, Google noted.