The internet is full of mysteries. Who really wrote “My Immortal,” and was it supposed to be a satire? Who is behind the group of hackers known as Anonymous? And why can’t Elon Musk just log off?

But a new question arose about two and a half months ago, when writer and reverse engineer Steve Moser found some very silly images in the Twitter backend:

Among the 16 images that were unearthed, we’ve seen some of the tamer ones surface, like the bright green bird with speech bubbles. But these illustrations were so bizarre that they have been seared into my brain. A potato with a mouth talking to a potato with eyes? A broken eggshell giving a press conference? A calculator printing out a fried egg? Why so many eggs?

But perhaps the most mundanely strange illustration was just a floppy rubber chicken. We finally spotted our avian acquaintance in the wild, making us feel like this:

Starting today, Twitter users began reporting that if you search for something that yields no results, you see our fun little rubber chicken friend.

Here’s an example of how it looks: 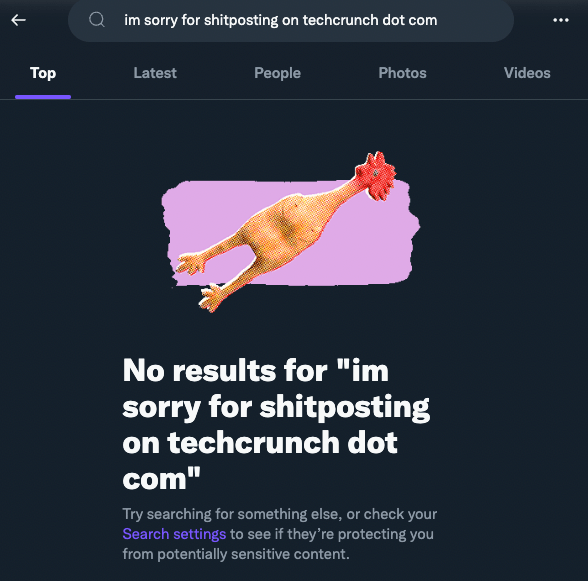 More and more of these unhinged illustrations are bound to start popping up on the bird site, and personally, we can’t wait. For one, it looks like our egg-at-press-conference buddy is about to have his big moment, and we’re happy for him (don’t worry, weird potato twins, your time will come).