Mercedes-Benz launched Tuesday an SUV version of its flagship all-electric EQS sedan in an effort to tap into the U.S. sports utility-loving market.

The 2023 Mercedes-Benz EQS utility vehicle is not the company’s first battery-electric SUV, but it’s poised to be the first SUV to actually make it to the United States. As a full-size SUV, it will set the direction for the brand’s future all-electric utility vehicles.

Mercedes will offer the new model in two trims, the EQS 450+ SUV and EQS 580 4MATIC SUV, each slated to arrive at U.S. dealerships in late 2022. The German automaker did not disclose the price or other key details, including curb weight, 0 to 60 mph acceleration time and top speed. It does see the Tesla Model X and the BMW iX xDrive50i as the vehicle’s main competition. A base price Tesla Model X is $120,490, including destination fee. The BMW iX xDrive50i starts at $83,500, excluding additional fees and the $7,500 federal tax credit.

Automakers expect all-electric luxury SUVs to be a profitable segment over the next several years, tapping into increasing consumer demand for both EVs and luxury SUVs. Trucks and utility vehicles already outsell sedans and coupes by a margin of two to one in the U.S., and the trend is predicted to continue.

The EQS SUV is the third model based on Mercedes’ new modular architecture, following the EQS executive sedan and forthcoming EQE midsize sedan. The automaker canceled an earlier effort to bring to the U.S. market a battery-electric compact crossover called the Mercedes-Benz EQC, based on the C-Class compact car. Another all-electric utility vehicle, the EQB350 subcompact crossover, is slated to launch here this spring but has yet to arrive. The EQB first launched in China and Europe. 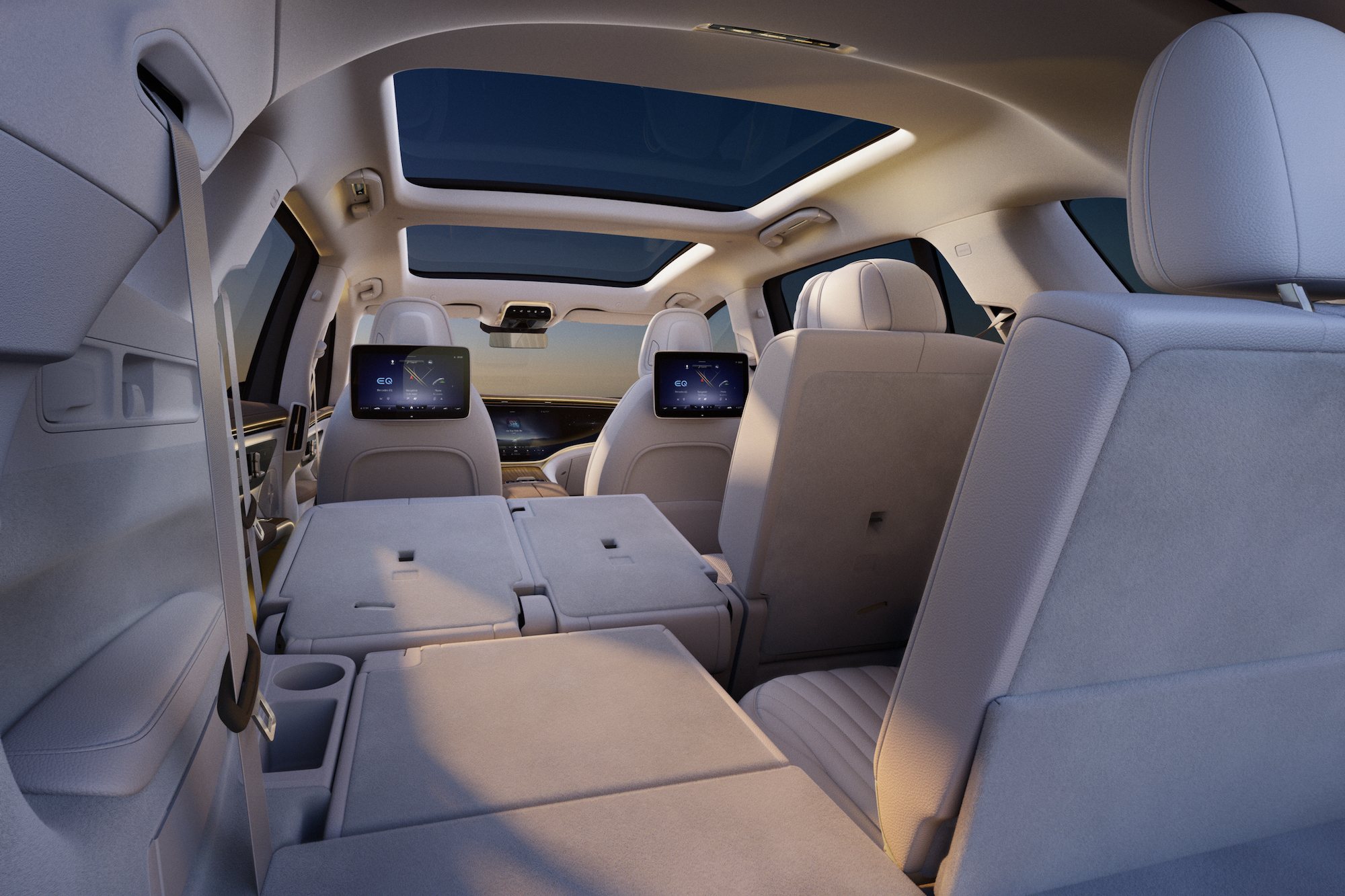 Mercedes-Benz thinks the EQS SUV hits the sweet spot that U.S. consumers are looking for — and that includes cargo and passenger space. The SUV shares the same long 126-inch wheelbase as the EQS sedan, but is 7.8 inches higher. Mercedes notes, in a nod to future well-heeled customers, that the trunk is roomy enough to fit four golf bags.

With a maximum 536 horsepower, the five-passenger EQS SUV can travel more than 372 miles on a full battery charge, according to WLTP estimates. An optional third row boosts seating capacity to seven, making the EQS SUV one of the largest fully electric utility vehicles in the passenger vehicle category.

Its most striking feature is the MBUX Hyperscreen, a three-screen system that merges under scratch-resistant glass to appear as a single, 56-inch display. 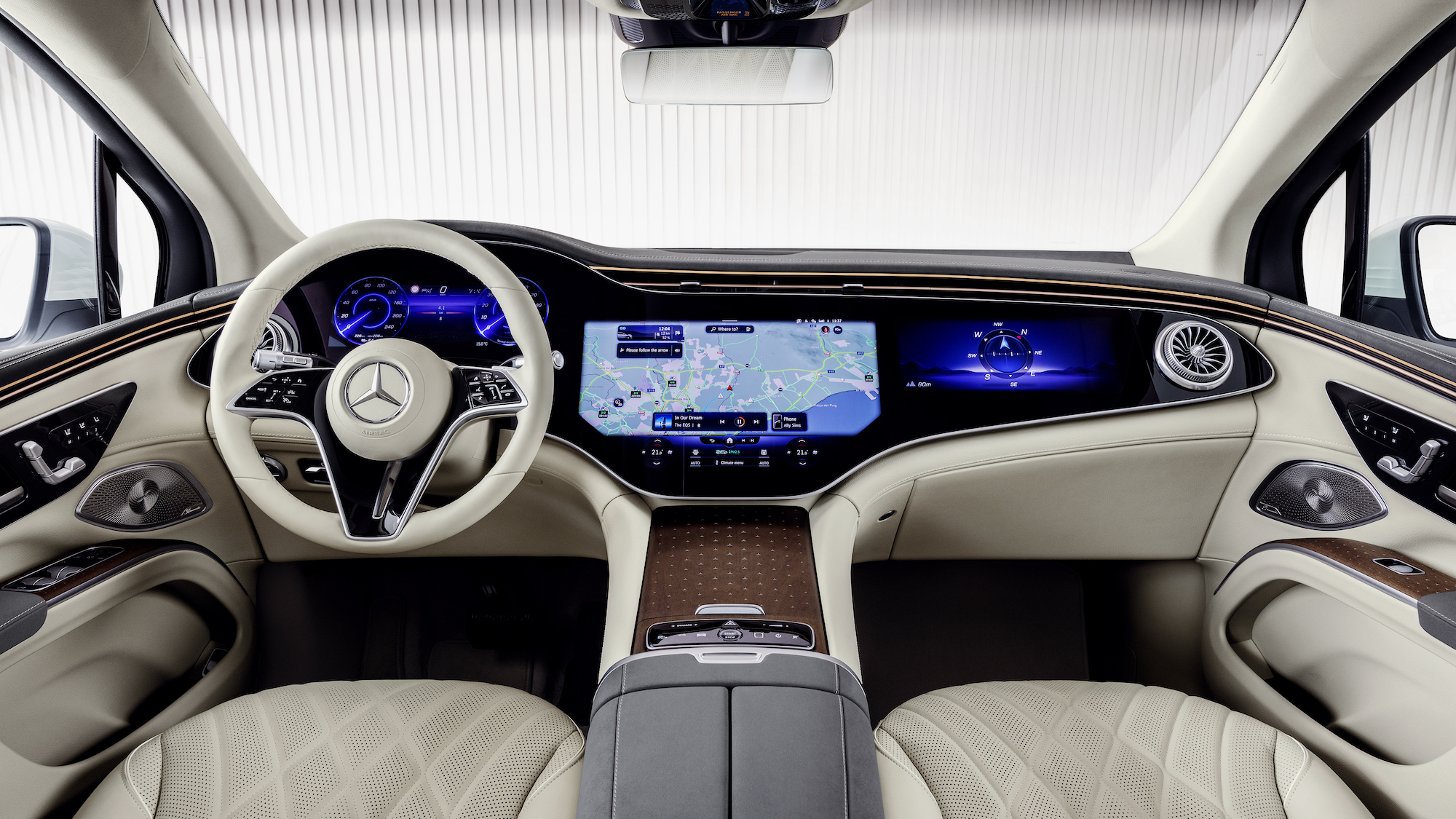 Like Mercedes’ flagship S-class sedan and its battery-electric EQS counterpart, the new SUV will feature the brand’s Energizing Comfort system, a spa-like configuration of sound, ambient lighting and seat massage patterns tailored to the driver’s mood. The EQS SUV will also debut a nap feature that allows the driver to relax when stopped at a service area, charging station, or other respite. With the push of a button, the SUV will recline the driver’s seat, close the side windows and blinds, activate the air ionization system, adjust the ambient lighting, play soothing sounds on the stereo and show a depiction of a starry sky on the center display screen.

Though the automaker is late to begin electrifying its lineup, it’s catching up quickly with plans to sell nine EVs by the end of the year. Mercedes also continues to produce concept vehicles meant to showcase future technology and design language. The latest example is Vision EQXX concept, which recently completed a European road trip traveling a class-leading 621 miles on a full battery, with 87 miles to spare.