Mercedes-Benz introduced a slew of electric vehicles ahead of the IAA Mobility show in Germany, including its first AMG-branded high-performance EV, a sedan and a G-Class SUV concept — all part of the company’s bid to become an electric-only automaker by the end of the decade.

Mercedes has already started producing the all-electric EQS, a tech-forward and sleek flagship that’s meant to be an electric counterpart to the S-Class. At IAA Mobility, Mercedes aims to showcase its next big EV’s moves.

Earlier this year, the automaker laid out its €40 billion ($47 billion) electric-only plan, a target that will push the company to become more vertically integrated, train its workforce and secure the batteries needed to power its products. This plan actually piggybacks on previous goals to build and sell more EVs. Back in 2017, Mercedes said it would electrify — which means gas-hybrid, plug-in hybrid or battery electric — its entire lineup by 2022. The German automaker said in July that by next year it will offer battery-electric vehicles in every segment that it serves.

Mercedes aims to launch three electric-only architectures in 2025 that will form the basis of all of its new vehicles. Its so-called MB.EA platform will be used for its medium to large passenger cars, while AMG.EA will underpin its performance Mercedes-AMG cars and the VAN.EA will be dedicated architecture for electric passenger minivans and light commercial vehicles. The company has already announced its “electric first” compact car architecture, known as MMA, which will launch in vehicles by 2024.

“The EV shift is picking up speed, especially in the luxury segment where Mercedes belongs,” said Ola Källenius, head of Mercedes Benz, as he announced the particulars of the new EQE. “That’s why we’re accelerating from ‘EV-first’ to ‘EV-only.’ Next year we will have battery-electric options in every segment we serve, and by 2025 we’ll have at least one electric alternative for every model we make.”

Källenius said the automaker aims to sell one EV for every two Mercedes cars on its path to all-electric, where market conditions allow, by 2030. 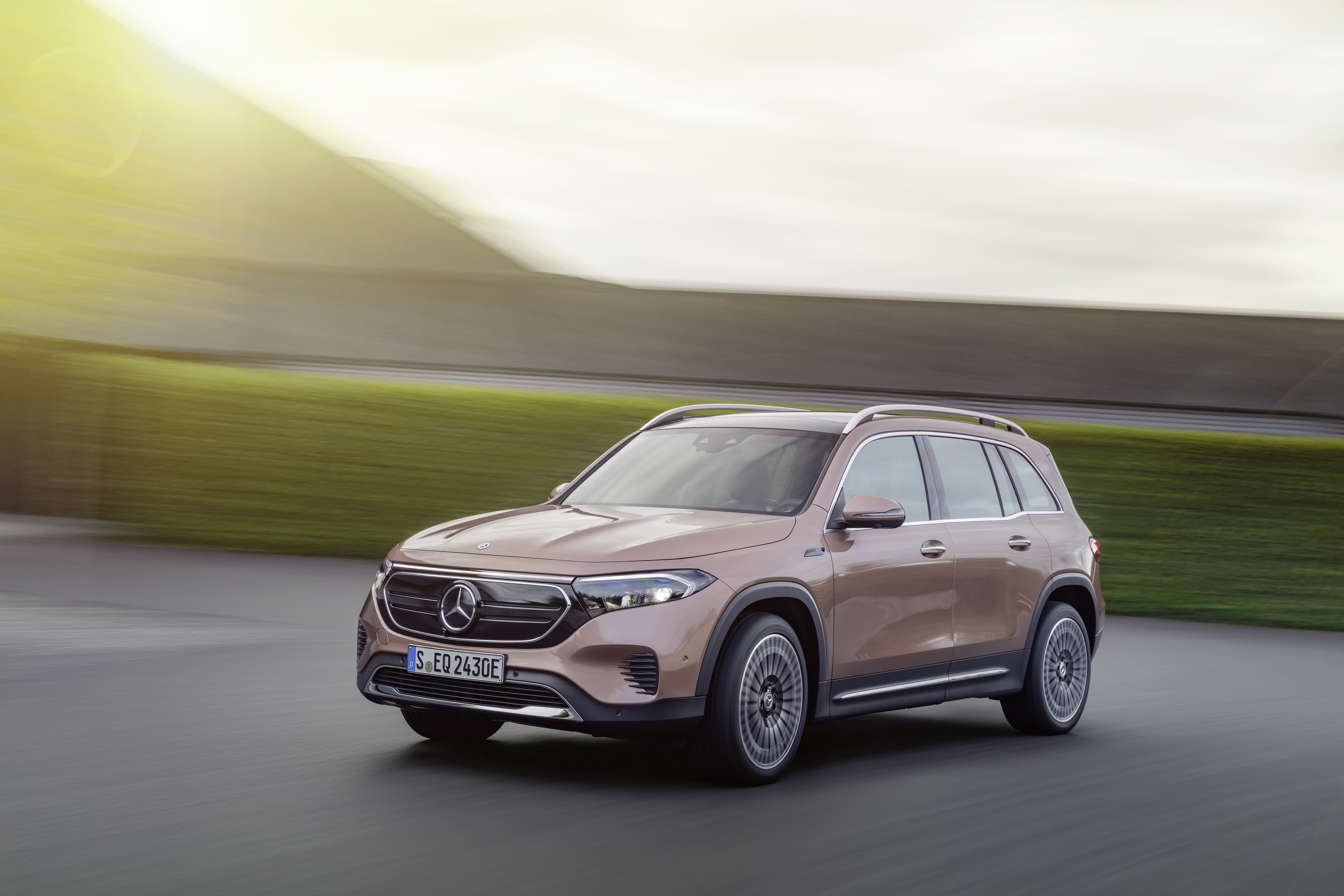 The crossover, which Mercedes revealed earlier this year, showed up at the automaker’s event. And this time, they shared a few more details, including that it is bound for the United States some time in 2022. It will launch in Europe and China at the end of this year.

The EQB will be the first electrically powered production vehicle from the Kecskemét plant in Hungary. Vehicles for the Chinese market are being produced in Beijing. When the EQB arrives in the U.S., it will come in two variants. The compact SUV will first launch as the EQB 300 4MATIC with 168 kW or 255 hp and then as the EQB 350 4MATIC with 215 kW or 288 hp. In the former variant, it’ll have 390 lb-ft of torque. In both cases, the range will be about 419 kilometers, or 260 miles, which is a bit less than the others revealed on Sunday. The automaker says a long-range version will follow, as well as a front-wheel drive model.

The electric powertrain is a compact, integrated unit comprising an electric motor, a fixed-ratio transmission with differential, a cooling system and power electronics. An asynchronous motor is used at the front axle.

The compact EQB comes standard with five seats, but can convert into a seven-seater if you’ve got a big family and need extra space. 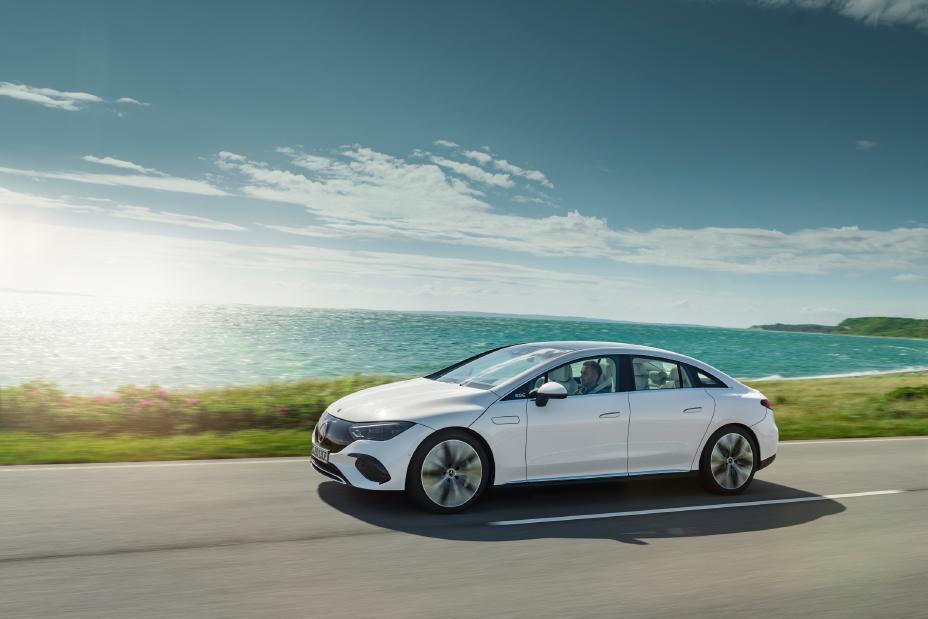 The EQE sedan is the automaker’s answer for anyone who wanted the flagship EQS but couldn’t afford it. The sedan will have a single electric motor that will produce 288 horsepower and 391 lb-ft of torque. For those keeping track, that is a skosh 41 hp less than the EQS. The 90 kWh battery has got around 660 kilometers, or 410 miles, or range, and can top up an additional 250 kilometers, or 155 miles, within 15 minutes of fast charging. At market launch, a second model with different variations will also be released, but Mercedes has not announced further details.

Many of the features in the EQS make an appearance in its little brother, such as an advanced driver assistance system, front doors that open automatically and rear-axle steering. The MBUX Hyperscreen multiscreen connected entertainment system is available as an option. Despite its slightly smaller body, the EQE also has a roomy interior, with 27 mm more front seat shoulder room, 65 mm higher seating position and 80 mm greater overall cabin length than the current E-Class.

The EQE is the automaker’s fourth EQ car to be unveiled this year, and it will soon be followed by SUV versions of the EQS and the EQE, according Källenius. Production will be in Bremen for the world market and Beijing for the Chinese market, and a staggered global launch will start in mid-2022. 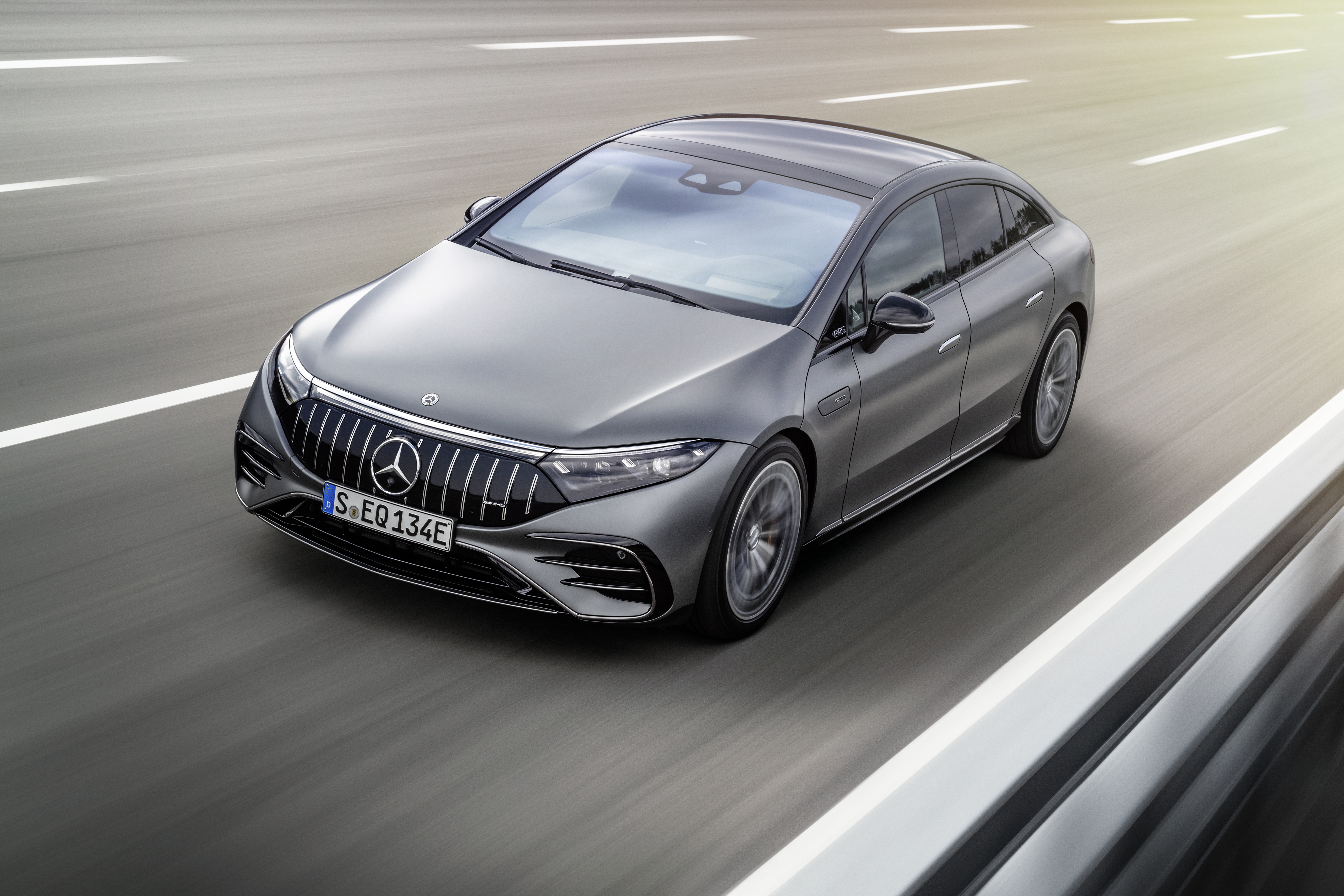 Get ready for power and performance. The AMG EQS is the first battery-electric AMG production model based on the EQ architecture. Made in Affalterbach, it’s meant to embody the perfect combination of a zero-emissions vehicle that still has power, body and luxury. To enhance that feel, the car is built with special hardware in and out of the car with a sound system so the car can croon as it drives, giving those inside and outside of the car that authentic AMG feeling.

A recuperative braking system sends energy back into the battery, which has a total 108 kWh of storage capacity, providing 580 kilometers, or 360 miles, of range. The car is also equipped for fast DC charging with over 200 kW.

The AMG EQS is being produced at the carbon-neutral “Factory 56” at the Mercedes-Benz plant in Sindelfinge outside of Stuttgart. Mercedes is planning to launch this vehicle to market at the end of 2021. 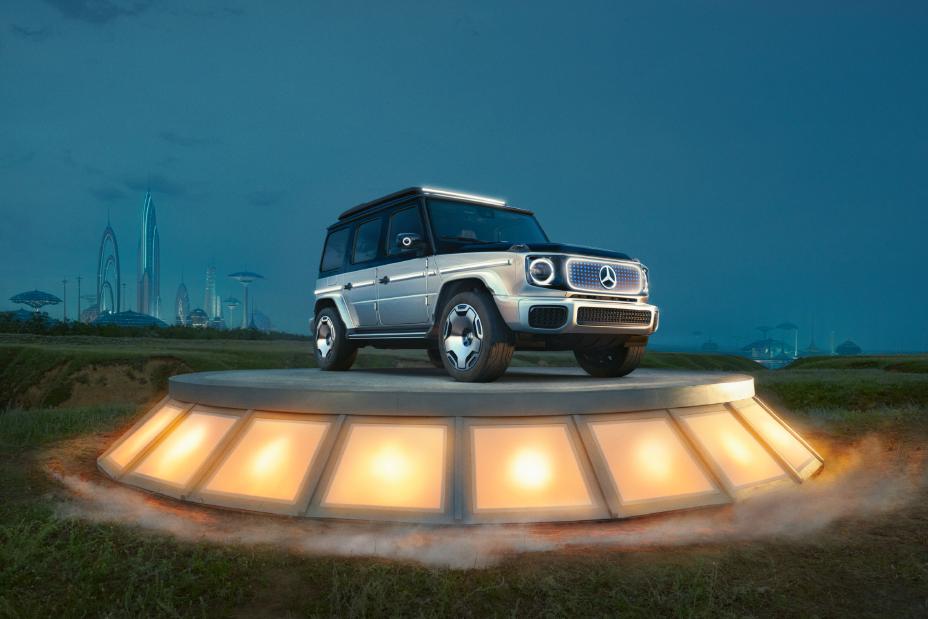 Hooray for the “mighty G!” The EQG is a G-class electric off-roader concept vehicle, complete with the strong character of the 4×4 G with the progressive luxury of the EQ models. The automaker didn’t provide too many details of the EQG because it still has a way to go before production, but here’s what we do know: It comes with four electric motors that have “lots of power” and are positioned close to the wheels so they can be individually controlled. There’s also a new rear axle and a two-speed gearbox for on- and off-road driving.

That off-road driving will be put to the test at Mercedes’s test track on the 1,445-meter-high Schöckl mountain in Graz at the end of its development into a series model. 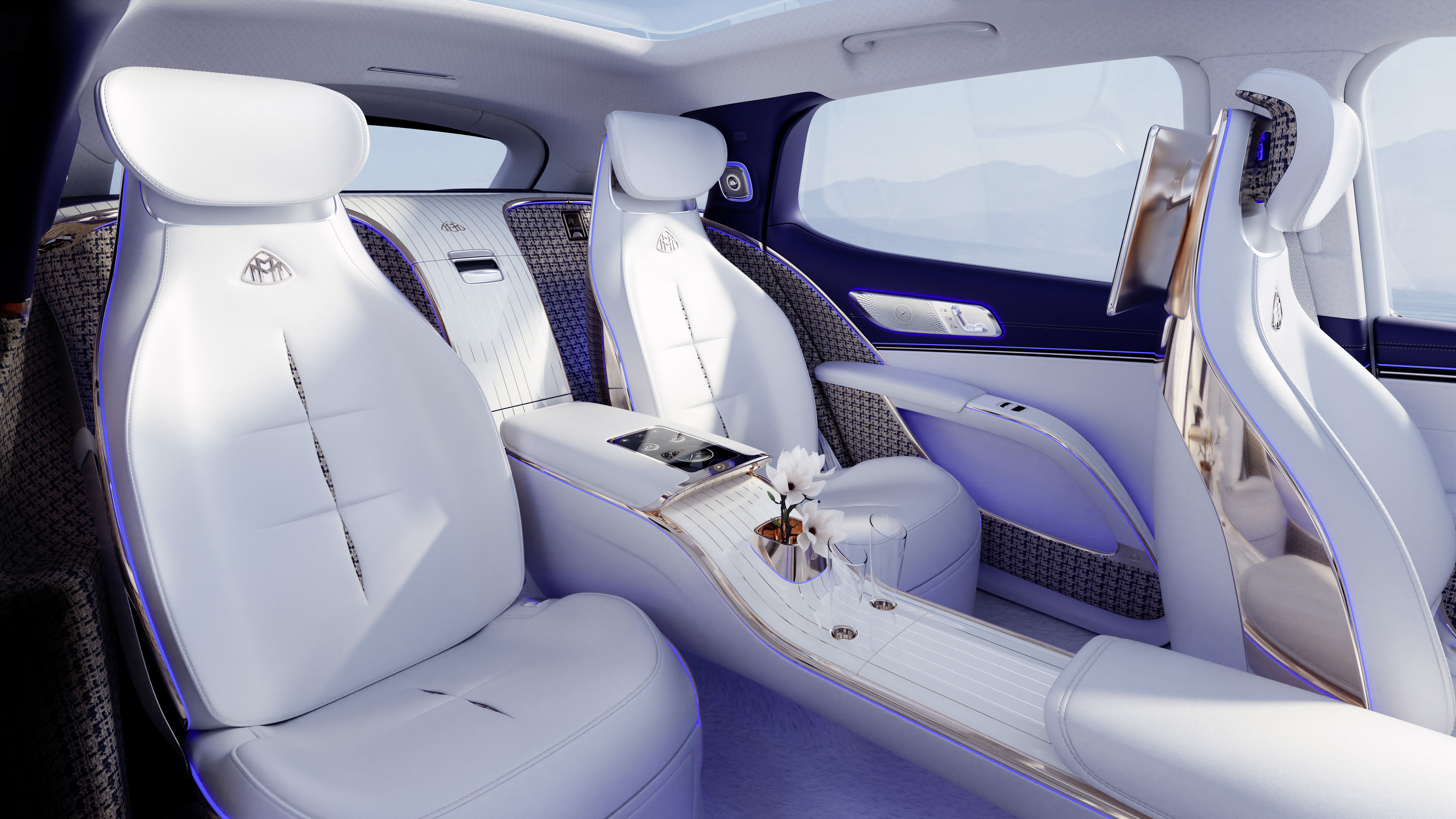 This SUV concept vehicle will be the first all-electric Maybach in the rather traditional vehicle’s long history. The Maybach EQS has the classic features of the old school models, like a two-tone paint finish, with the progressive drive technology of the EQ lineup. It’s also swanky as hell. The white piano lacquer interior looks plush and sleek, something the other half in the film “Elysium” might drive in to reach their paradise in the sky. It’s made to be a comfortable place to work or rest, particularly if you go for “executive seats” and the “chauffeur package.”

The SUV should hit the markets in 2023, but Mercedes said it would introduce the platform for upcoming SUVs as early as next year, and it’ll have an expected range of around 600 kilometers, or 373 miles.