When you talk to folks about what they have missed most about the office since we moved to work from home in 2020, people often point to whiteboarding in a conference room with colleagues, something they have said was hard to do in a digital context. Many companies have tried to fill that void, including startups Mural and Miro, the latter of which had a fat $17.5 billion valuation in its most recent round.

Today, Box is entering the fray with the announcement of Box Canvas, a tool that lets you do virtual whiteboard-style brainstorming, but also gives you a place to collaborate on various types of visual content such as a product workflow or a brick and mortar merchandising plan.

Box CEO and co-founder Aaron Levie says that his product integrates with the Microsoft and Google office suites for structured document collaboration, and it also has its own native tooling with Box Notes, but the idea is to bring that ability to collaborate from the realm of structured documents to more visual kinds of content.

“With Canvas, we’re bringing that same kind of experience, but more to visual collaboration, so that kind of virtual whiteboard type experience. I think even though it’s a space that has seen great innovation from many companies, I still believe it’s actually extremely early in this market. And I think we’re only just starting to see the kind of potential of what work is going to look like in this hybrid way of working.” 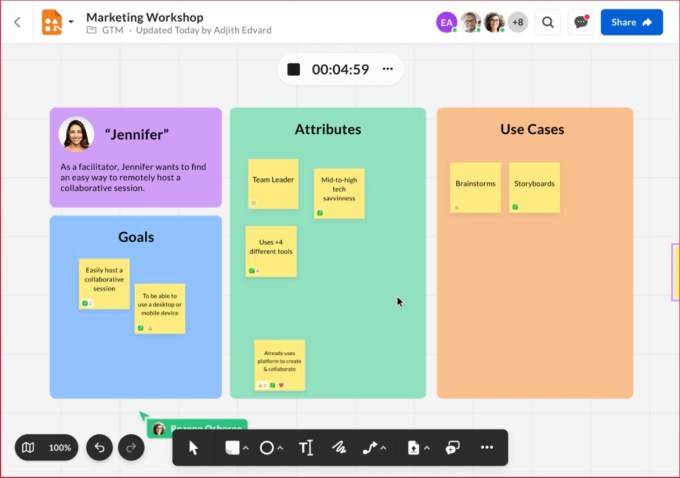 While Box will bundle Canvas into its new suite offering at no additional charge, it also intends to make it available for free as a standalone offering for anyone who wants to use it with no limits. He said the intention is to never charge for this capability moving forward.

“There are a bunch of core activities that we think every user on the planet is going to want to do with their content. You’re going to want to store it, share it, collaborate around it, get it signed. And so we want to make as many of those core capabilities available to the widest number of people — and then we’ll have advanced features based on your ability to govern that data or make it compliant for a specific industry. Those will be very advanced capabilities that we continue to have more and more of over time [and we will charge companies for those capabilities],” he said.

Product-led growth has worked for the company from its earliest days when it began offering a free tier of Box, and Levie sees offering Canvas for free as an extension of that thinking, something the company intends to fully embrace moving forward.

As for those other companies producing similar software, Levie says this isn’t about competing with them because it’s a free add-on. “I don’t really think about it as having to compete with anyone, frankly, because it’s for our customers. So if you’re a Box customer and you’re using a Box for managing your most important content, this is just another really valuable way to get your work done.”

Box Canvas will be available in the fall, according to the company.

Box strikes back with a quarter that beats everyone’s expectations, including its own