But Box prevailed, and the shareholders who backed the executive team were rewarded this week with a quarter that beat everyone’s expectations, including the company’s own.

Now that the proxy fight is over, it’s clear that some of the initiatives that Box had been building over the past few years to move further into the true enterprise market are paying off. Alan Pelz-Sharpe, principal analyst, Deep Analysis

Last quarter, Box’s revenue reached $233 million, up 17% from a year earlier, and beating analyst estimates of $229 million, according to the company. The revenue result also came in ahead of Box’s own estimates that growth would land somewhere around 12%. Its shares are up over 6% for the week as of Friday morning.

When Starboard lit a fire under the company last year, Box had reported a very different set of quarterly results. Growth was an anemic 8.3%, putting pressure on the company’s leadership to start improving growth and profitability.

Looking back with the benefit of hindsight, that quarter wound up being the low point for Box as the company began an ascent of slow but accelerating growth, as the graph below illustrates: 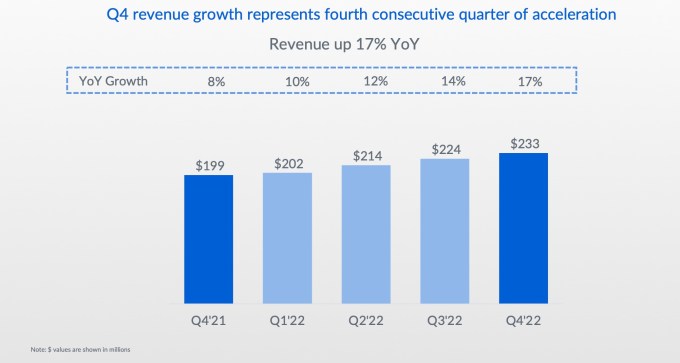 Levie was understandably upbeat about his company’s results, saying Box’s growth didn’t come from any one particular area — it was across the board.

“It’s been everything from small businesses that are growing quickly to large enterprises that are going through significant digital transformation. I mean, we had some major, major wins [including] large banks and government agencies and large industrial goods manufacturers. So it’s been very broad-based,” he said.

One of the primary reasons for the uptick in business is bundling, which Zendesk also saw great success with last year. It turns out that building a suite of products works out well for SaaS companies.

“I think what’s been so important from a business model standpoint is our move toward bundled plans. So we have Enterprise Plus, which is a new enterprise edition of Box that has Box Shield, Box Governance, our eSign capabilities, [and others] all in one suite. And, and that’s certainly accelerated our growth and led to more and more customer adoption of our full platform,” Levie explained.

Alan Pelz-Sharpe, founder and principal analyst at Deep Analysis, a firm that watches the content management space Box operates in, said the proxy fight was a drag on the company, and now that it’s past it, it has been able to move forward.