The terminal often feels like an afterthought, and there hasn’t been a lot of innovation in this space for a very long time. Warp, which is launching its public beta today and announcing $23 million in funding, is trying to change this by building a new command-line terminal that aims to make developers more productive. For now, the Warp public beta is only available on macOS, but the company promises Windows and Linux versions in the future, too.

As the company announced today, it previously raised a $6 million seed round led by GV, with participation from Neo and BoxGroup. It has now also raised a $17 million Series A round led by Dylan Field, the co-founder and CEO of Figma. Other participants in this (somewhat unusual) entrepreneur-led round include Elad Gil, former LinkedIn CEO Jeff Weiner and Salesforce’s co-founder and co-CEO Marc Benioff.

“I’ve been a developer now, for 20 years,” Warp co-founder and CEO Zach Lloyd, who was previously a principal engineer at Google and the interim CTO for Time, told me. “I’ve always been a terminal user. I’ve always thought it was kind of a weird app, to be honest. [ … ] But it’s an interesting app in the sense that it’s ubiquitous. You walk by any developer’s desk and they’re going to have a terminal open. There are only a couple apps like that: the terminal and the code editor. So I thought it was an interesting leverage point for doing something that would have an impact across all developers. And then, if you can get really good at it you actually get a lot of real productivity gains.”

Out of the box, Warp works with shells like zsh, fish and bash. In many ways, the user experience feels reminiscent of a modern text editor, with code completion autosuggestions and menus, for example. But there are also features like cursor positioning, the ability to move back through your terminal history command to command and then copy the output with a single click, built-in documentation and more. Those are features that may seem obvious at first but aren’t really available in today’s terminals. Being able to move the cursor wherever you need it shouldn’t be a new thing in terminals in 2022, but it is.

The Warp terminal does, of course, feature standards like tabs, split panes, keyboard shortcuts and built-in SSH support. With Warp, developers can also share their workflows with the rest of their teams.

While at Google, Lloyd worked on Google Docs and he noted that something he took away from that is that anytime you can take an existing desktop app and add collaboration and teamwork on top of it, you can unlock quite a bit of extra productivity. 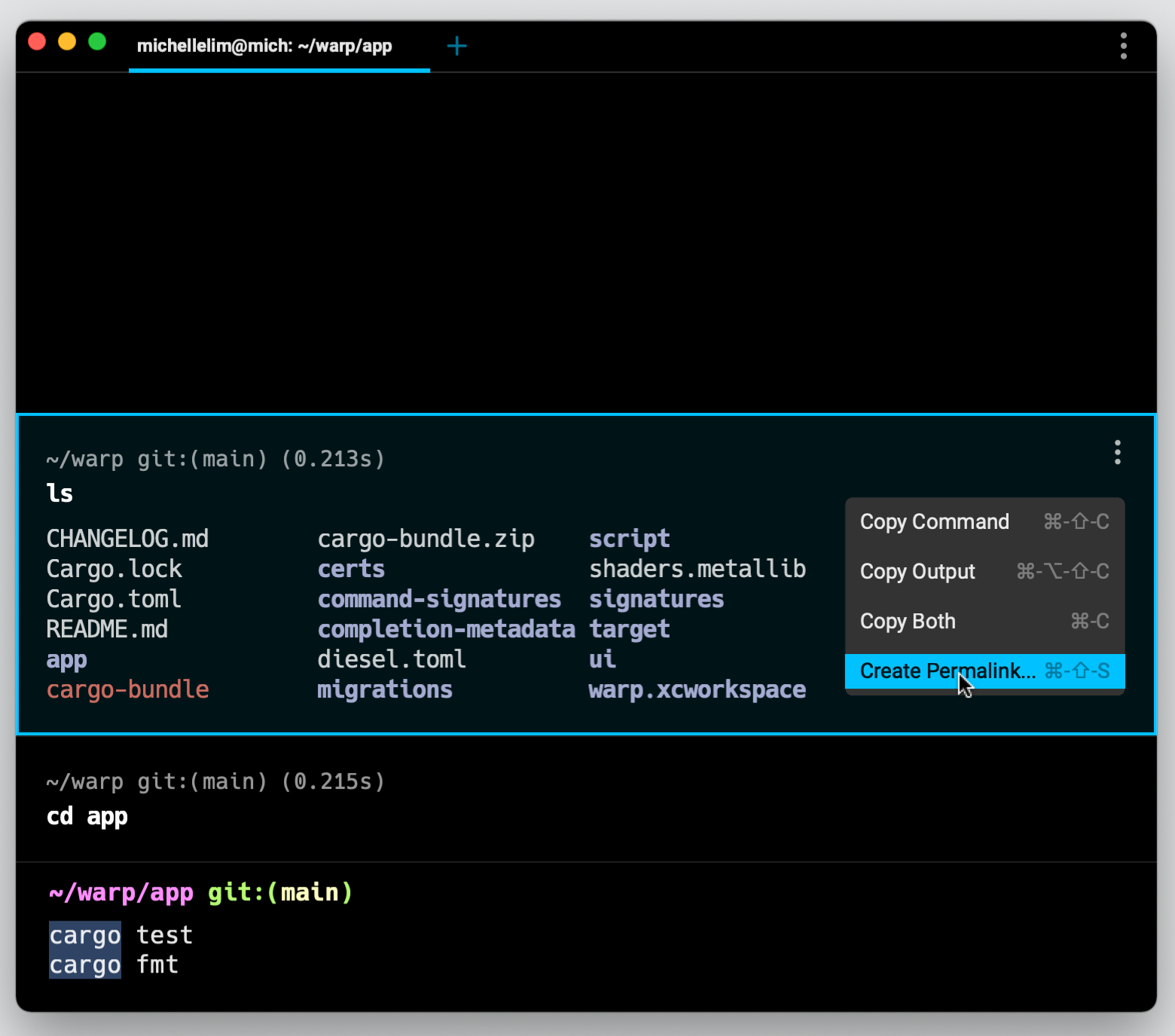 It’s maybe no surprise then that collaboration is part of what he hopes will make Warp stand out and be part of the company’s monetization strategy. Currently, the collaboration features mostly center around the ability to easily share commands and their output, as well as workflows, but soon, Warp will also introduce the ability to share.

It’s worth noting that for Warp, the terminal is only the beginning. As Lloyd noted, the company’s mission is to “elevate developer productivity. It’s not to build the best terminal that’s ever existed.” The idea here is to build a platform, with the terminal at the center but also as something akin to a distribution point for doing other things. That may be a code editor, a platform for building apps or for cloud-based development. “But those aren’t the focus to start. I think those are opportunities that open up if we execute really well on Warp,” Lloyd said.

Marc Benioff sure seems to be excited about it. “We are delighted to once again partner with a great entrepreneur, Zach Lloyd,” he said. “Developers will greatly benefit from the genius of Warp.dev.” So is Instagram co-founder Mike Krieger, who is working at a new startup in stealth. “I have been using Warp every day at work,” he said in a canned statement. “My favorite thing is the speed: both in terms of how fast it works and also how fast you feel while using it, especially the excellent typeahead and search. Warp brings terminals into the modern day and I can’t wait to see where they take Warp.”