You’d think data visualization and exploration is a bit of a solved problem thanks to the likes of Tableau, Sisense, Looker, Microsoft Power BI and their competitors. But for the most part, these tools were developed before every company had a data lake and warehouse — let alone a lakehouse. Of course, that means there is space for more startups in this field to provide a modern experience for building dashboards on top of all of this data. One of those is Glean, which is now coming out of stealth and announcing a $7 million seed funding round led by Matrix Partners’ Ilya Sukhar. A number of angel investors, including Elad Gil, Shana Fisher, Dylan Field, Scott Belsky, Cristina Córdova, Akshay Kothari, DJ Patil and Anthony Goldbloom, also participated in this round.

Glean co-founder Carlos Aguilar was an early systems engineer at Kiva Systems, where he got to work with large data sets from the company’s warehouse robots. It was there that he realized that a lot of teams wanted access to this data, but writing a new SQL query for every request wasn’t scalable in the long run. “Even back then I developed this passion for not having to do that,” he told me. “I could build these data apps and then a whole subset of questions would just disappear. But more than that, people were super empowered and now they could do all sorts of things that they couldn’t do before. […] I loved this idea of like taking the complexity, simplifying it and building tools out of it.”

After Amazon acquired Kiva, Aguilar worked there for a few years and then joined Flatiron Health as the first data hire there. While the team was able to build tools to wrangle data there, too, the bottleneck shifted to building data apps to help the rest of the company get insights from their data as quickly as possible. That meant lots of time building dashboards in legacy BI tools and helping others to use those.

The mission of Glean, Aguilar said, is not just democratizing data, but democratizing insights. Being able to dig through data and not just looking at a dashboard is what most users want, he argued, and that is something that a lot of the legacy tools actually do quite well. “There’s a bunch of startups and upstarts, but nothing really gives you the powerful sort of interactivity that you get with a lot of these legacies tools still,” he said.

Glean wants to combine this interactivity without the barrier to entry of the likes of Tableau. You still need somebody in a company to know a little bit of SQL and somebody who can model the data, but once that’s done, Glean will automatically try to find the best defaults to visualize this data. The service currently supports Snowflake, BigQuery and PostgreSQL. As Aguilar noted, the company’s focus right now is on data warehouses, in part because this data is typically already cleaned up and ready to be queried. 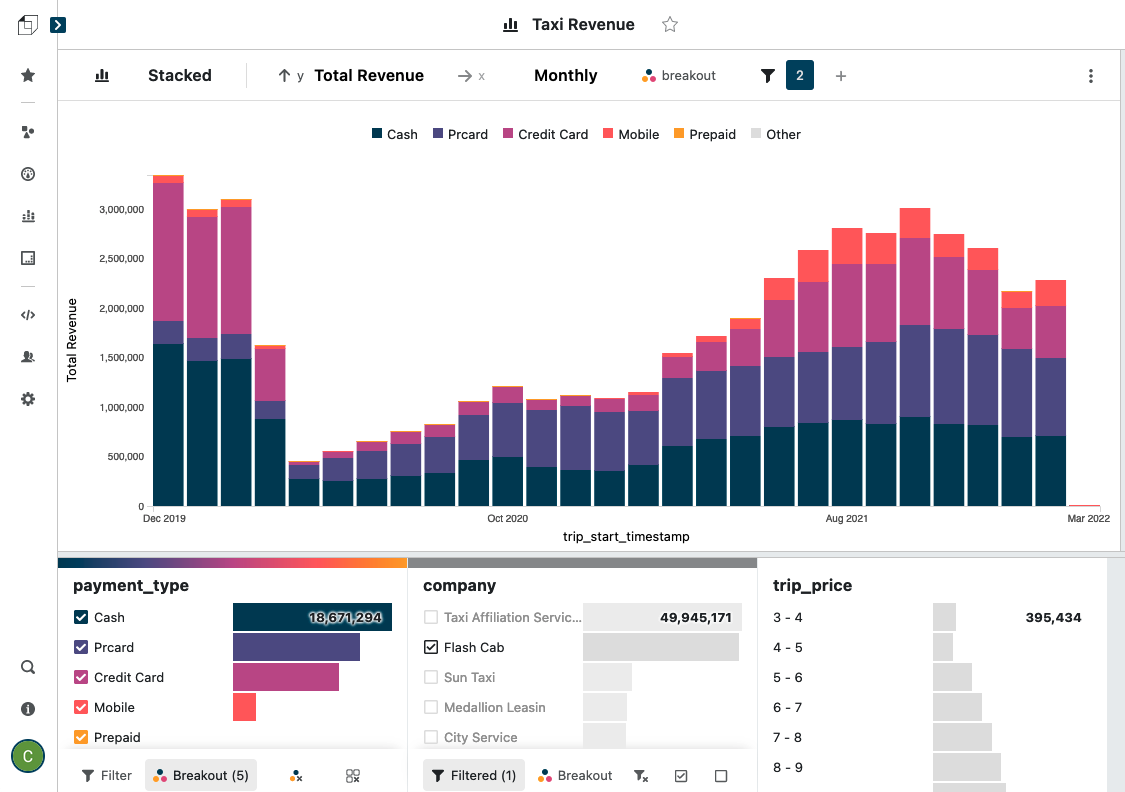 Once those first steps are done, even non-technical users should be able to easily dig through the connected data and remix a given view for their own use cases, too. As of now, Glean supports all of the standard visualizations (think pivot tables, line charts, bar charts, etc.). And while it may try to democratize this data analysis workflow and many of its users will be non-technical, the company is also building a lot of tools for engineers, including git integrations, a CLI, a native build tools and more.

“We’ve seen a massive revolution in data infrastructure over the last few years. Organizations of all kinds now have access to more data than ever before. But there’s been little innovation in how data teams surface insights to their colleagues. They struggle to keep pace and deliver the business impact expected of them,” said Matrix Partners’ Sukhar. “Carlos and his team at Glean are rethinking the BI layer to solve this problem. The idea is to empower everyone in an organization to dive into data and make sense of it. The team has deep experience building data products at Flatiron Health and we’re excited to work with them on capturing this huge opportunity.”

Looking ahead, the team wants to build more collaboration features to bring an almost Google Docs-like experience to these dashboards — and that is, in part, what the team is going to use the new funding for. “The focus is really on trying to create an incredible experience with a very high level of fit and finish that just feels incredible to use,” said Aguilar. “It turns out, doing that in the data context and with a lot of different personas is a very hard problem. So investing in these core analytics workflows and making that an incredible experience is high on the list.” The team is also looking into building more automation systems and tools to automatically create models from various points in a company’s data pipeline.