Dapio, the U.K.-based cashless payment solutions provider for businesses, today announced that it has raised $3.4 million to fuel the launch of its ‘Tap to Pay’ solution for Android users in the U.K. and Europe.

Formerly Paymob — not to be confused with the Egyptian payments processor of the same name — Dapio allows businesses to accept cashless payments in-store as its technology converts the back of any Android smartphone into a direct card reading terminal.

It isn’t easy for micro-businesses and solo enterprises, especially those run by migrants, to invest in hardware and buy point-of-sale systems because of how expensive and clunky they can be. And this affects how they can take payments from customers.

There are an estimated 3.2 million of these kinds of businesses in the U.K. And away from the fact that these systems are hard to purchase, this segment, which makes up 75% of all the nation’s businesses, is underserved by traditional payments providers.

“I entered the U.K. a few years ago and initially struggled with getting financial services, like insurance, opening bank accounts, starting accepting payments,” co-founder and CEO Kosta Du told TechCrunch.

“I exactly understand this pain and how difficult it is to go to a bank and go through the exact procedure applied to a big enterprise. My wife also faced a problem when having to send wire transfers to pay clients because these microbusinesses were not eligible for big machines. And I just thought there should be a more elegant solution for solopreneurs and micro-businesses to make payments.”

Du, alongside his co-founder Grigory Gurbanov, proceeded to start Dapio in 2019. And in the years that have followed, to this point where it has raised some money, the company has engaged with various financial institutions to obtain licenses to operate a mobile app that replaces card machines.

Dapio’s launch is a sign of where the U.K. payments scene is currently — where contactless payments aided by NFC technology have exploded, making up a quarter of all payments in the country.

It’s even catching on globally, as Apple plans to launch Tap to Pay in the U.S. But Dapio is solely targeting the Android market, which accounts for 42% of the U.S. mobile market, 46% in the U.K. and 71% globally.

According to the company, its ‘Tap to Pay’ mobile app, to be launched this spring, will allow any business to instantly accept contactless payments with the tap of a card or mobile phone. Its current partners include ZmBIZI and Payment Plus.

“If you are starting a business or an entrepreneur, you might need to go to a bank, open a bank account, ask for a machine that costs about $300. But what we invented is just a mobile app sitting on your phone,” said Du.

“You, as a business owner or solopreneur, when you need to choose to charge a payment, you open the app while the customer’s card is placed behind the phone.” 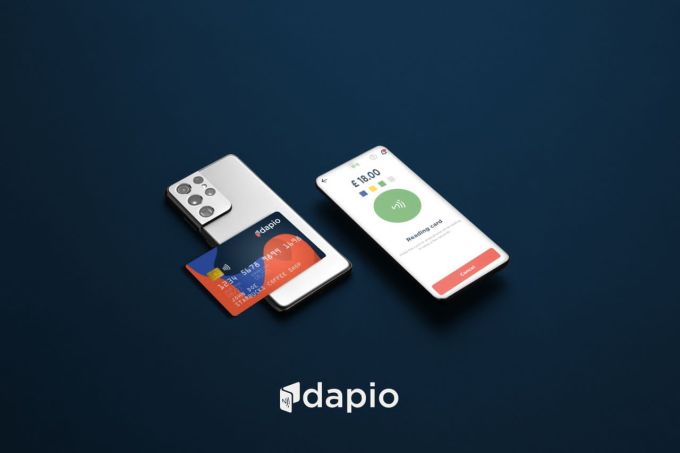 With various players offering contactless payments, such as Zilch and Nomod and others enabling Apple Pay as one of their payment options, how does Dapio stand out from the crowd?

“The key differentiator between other players and us is that we’re keen to go through embedded finance. We don’t only want to reach out to businesses directly; instead, we want to embed our payment acceptance feature inside existing applications of fintechs, POS vendors, banks and telcos who will integrate our tech to all of their business clients,” said the chief executive.

Dapio has up to 20 merchants currently testing out its product. CEO Du said by the time Dapio finally goes live with the few partnerships secured, more than 3,500 merchants would’ve been onboarded onto the platform.

And as ZmBIZI and Payment Plus power the technology behind Dapio’s expansion across the U.S., U.K. and Europe, co-lead investor Flutterwave will be integral for when it wants to expand into Africa and the Middle East.

A Flutterwave investment outside the shores of Africa was hardly anticipated, considering it had only made one public investment in Ivorian fintech CinetPay and appeared set on making further investments to consolidate its presence on the continent. But even so, the fintech unicorn is also particular about penetrating advanced markets and investing in startups there, as it has done with Dapio is part of a long-term play CEO Olugbenga’ GB’ Agboola described in a February interview.

“We want to change our focus from just Africa to emerging markets and eventually the U.S., the U.K., Europe. Our goal is to ensure that our infrastructure powers those corridors,” he said.

Commenting on why Flutterwave backed his company, Du added, “The key point for us is enabling payment acceptance for micro and small businesses; that drives the recent economic trends. Flutterwave, seeing this, really wanted us to be a part of their bigger vision.”