Figuring out what’s going on in the brain is generally considered to be somewhere between extremely difficult and impossible. One major challenge is that the best ways to do so are room-sized machines relegated to hospitals — but brain.space is hoping that its portable, powerful and, most importantly, user-friendly EEG helmet could power new applications and treatments at home and, as a sort of cork pop for its debut, in space.

Electroencephalography, or EEG, is an established method for monitoring certain signals the brain produces. An EEG can indicate which areas of the cortex are active, whether the user is concentrating, agitated, and so on. It’s not nearly as precise as an MRI, but all you need for an EEG is a set of electrical contacts on the scalp, while an MRI machine is huge, loud and incredibly expensive.

There’s been precious little advancement in EEG tech, though, and it’s often done more or less the same way it was done decades ago. Recently, that’s begun to change with devices like Cognixion’s, which uses re-engineered EEG to interpret specific signals with the goal of allowing people with motor impairments to communicate.

The Israel-based brain.space (styled in lowercase, with a period in it, specifically to vex reporters) has its own take on EEG that it claims not only provides superior readings to traditional ones, but is wireless and can be set up without expert help.

“It was designed to be the most effective, cheapest, easiest-to-use EEG acquisition headset in the world. One headset, for multiple people, that automatically configures itself perfectly to each one’s head,” said brain.space CEO and co-founder Yair Levy. In development for four years, the headset has 460 sensors and is “fully automated” in that it can be set up and run very simply. 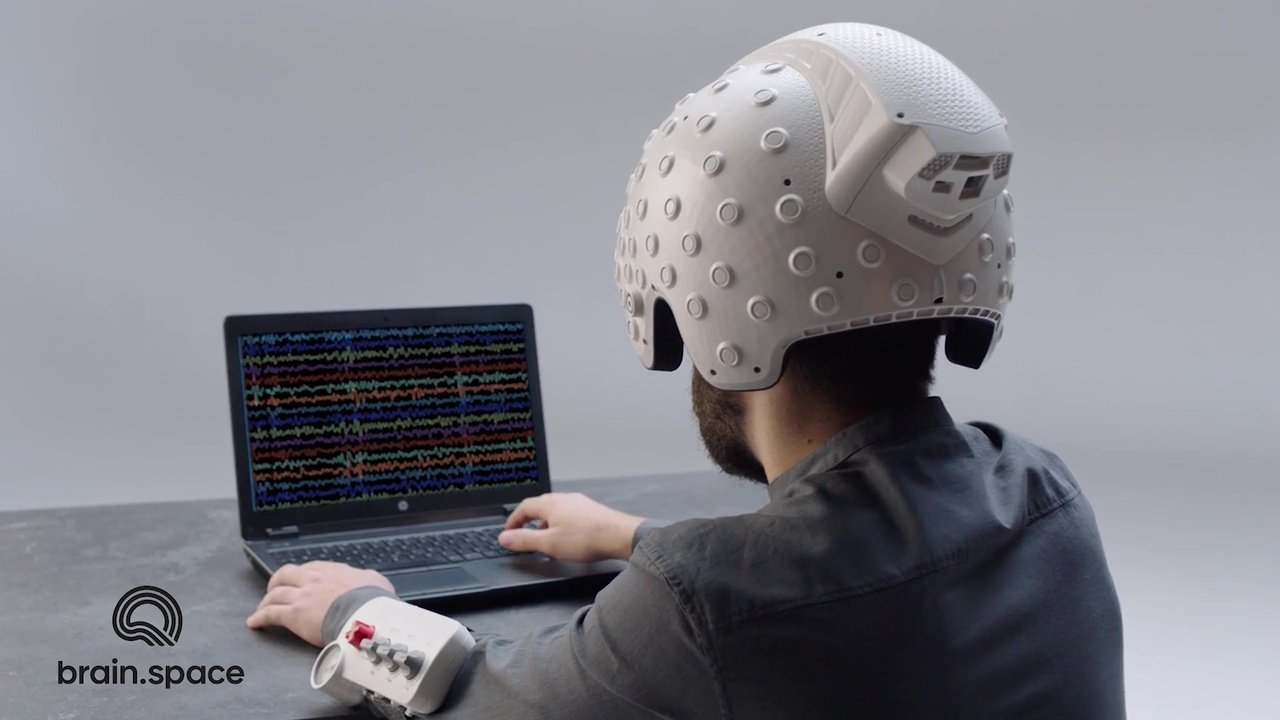 Not exactly stylish, but other EEG setups are even worse. The armband is an ISS-related power regulator. Image Credits: brain.space

As it is only just emerging from stealth, the company has no peer-reviewed documentation on the headset’s efficacy and resolution. “But we recently kicked off research activities with several academic institutes, including the Department of Cognitive and Brain Science of Ben Gurion University, as well as a medical center in Israel,” Levy said.

The fact is it would be hard not to improve on the EEG setups being used in many labs — if it did more or less what they did in a portable, user-friendly form, that would be enough to celebrate.

The science of EEG is well understood, but the company has improved on existing designs by including more densely packed electrodes, and ones that fortunately do not require any kind of conductive gel or oil on the skin — anyone who’s had their head oiled up to take part in an experiment can testify that this is not fun.

Because of the nature of EEG signals, these sensors will overlap somewhat, but Levy explained that their internal studies have found that these signal overlaps follow a power law, meaning they can be computationally disambiguated. That means a clean data output that can be interpreted by and used as training material for machine learning systems.

Although the headset is obviously a big piece of the puzzle, the company won’t only be making and distributing it: “Our vision is to provide a comprehensive software end-to-end stack that makes working and integrating brain activity as easy as integrating GPS or fitness data,” said Levy.

Of course, wearing a helmet that makes you look like Marvin the Martian isn’t something you’ll do on your morning run, or even while riding your stationary bike or standing at your desk. It’s still very much a situational medical device. But like other advances in technology that have brought medical monitoring devices to the home, this can still be transformational.

“We see this as asking what putting a cheap GPS in an iPhone would be good for,” Levy explained. “The obvious answer was mapping, but the reality was that developers did far more innovative things with it than just road directions. That’s how we see our job, to allow innovation to occur around brain activity, not build out the use-cases ourselves.”

Of course, if they didn’t have any use cases in mind, they would never have been able to fund four years of R&D. But they’re looking into things like tracking learning disabilities, markers for cognitive declines from diseases like Alzheimer’s, and also athletic performance. The cost of the headset will vary depending on the application and requirements, the company told me, though they would not provide further details. For reference, bargain-bin setups go for under a grand, while medical-research-grade ones run around $10,000, and brain.space would likely fall in between.

The first public demonstration of the tech is about as flashy as you could imagine: an experiment set on the International Space Station. Brain.space is taking part in Axiom-1, the first fully privately funded mission to the ISS, which will have a host of interesting experiments and projects on board.

Participants in the study will use the headset on the surface while performing a number of tasks, then repeat those tasks with variations while aboard the ISS. The company described the reasoning for the experiment as follows:

brain.space has set itself the goal to become the standard for monitoring neuro-wellness in space.

While there is data collection being carried out for various physiological measurements, such as heart rate, galvanic skin resistance, and muscle mass, there is currently no high-quality longitudinal data regarding the neural changes in prolonged space missions. Such information can be vital in assessing day-to-day plastic changes in the brain and predicting how the brain will adapt to long-term space travel.

Naturally, they’re not the first to think of this — NASA and other space agencies have done similar experiments for years, but as brain.space points out, those were with pretty old-school gear. This is not only potentially a test of cognitive function in space, but a proof of the idea that cognitive function in space can be tested with relatively little trouble. No one wants to grease up their scalp for a weekly cognitive load test on a three-month trip to Mars.

In addition to the headset and experiment, brain.space announced it has raised an $8.5 million seed round led by Mangrove Capital Partners (no other participants named). It isn’t cheap doing medical device R&D, but there’s almost certainly a market for this in and beyond telehealth and performance monitoring. We should hear more about the headset’s specific advantages as it enters more public testing.