Instagram today is making a chronological feed available to all users, as earlier promised, alongside another new feed-filtering option that will allow you to scroll through posts from your favorite accounts. The features had been launched into limited testing starting in January but will now reach Instagram’s global user base by the end of the day on Wednesday, March 23 — a faster rollout than usual.

The feed options will be available to global users across iOS and Android, but won’t be available on the web version of Instagram.

Users will be alerted to the new options, Following and Favorites, from a pop-up at the top-left of the app, under the word “Instagram.” From there, you can tap on which feed you want to view. 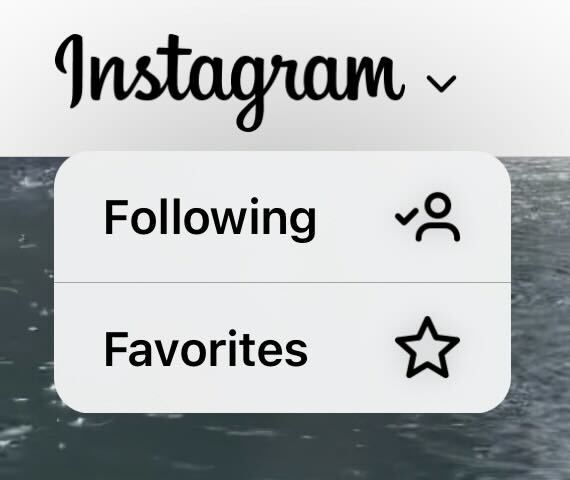 Company head Adam Mosseri first announced Instagram’s intention to bring back the chronological feed during statements made during his December 2021 testimony before a Senate panel that focused on the potential harms to young people using the app.

Lawmakers and regulators are increasingly concerned about Big Tech’s use of algorithms to sort the content people see after numerous studies have pointed towards the possibility that people are being trapped inside so-called “filter bubbles” and “echo chambers” that reflect their worldview — whether or not that view is reality. They’re also worried that amoral algorithms are leading users down rabbit holes, sometimes towards extremist views, as platforms optimize simply for what will make someone click and engage more, without weighing safety factors. And they’re particularly worried about algorithms’ impacts on younger people.

During Instagram’s Senate hearing, Mosseri was asked if he believed users should be able to use the app without “being manipulated by algorithms,” and he said the comapny was working on a feature that would give users that choice, which it planned to launch in early 2022.

The feed options arriving today are much like what was tested earlier this year. There are now three options for viewing your Instagram feed: the main, algorithmic Home feed; the chronological feed (Following); and the new Favorites feed, which consists of accounts you choose. Typically, this latter feed would include the accounts of best friends, family and perhaps some favorite creators. But you could use this option to curate any other set of Instagram accounts you wanted to easily view separately from the main feed. Users can have up to 50 accounts set as Favorites.

In addition, when scrolling through the main Home feed, posts from those accounts on your Favorites list will now rank higher and will be designated by a star icon. 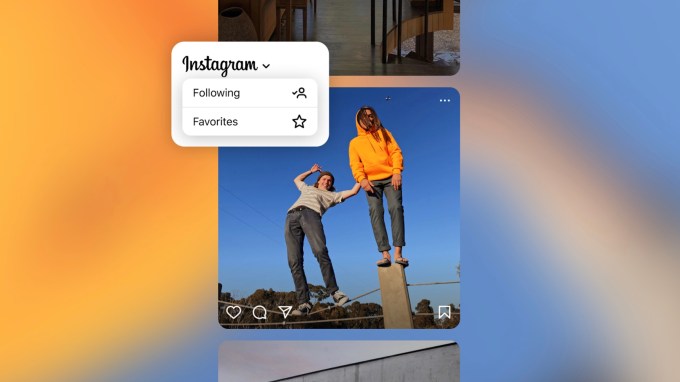 In both of the two new feed options, Following and Favorites, posts will appear in chronological order without any other ranking involved, Instagram notes.

But there is one big caveat to these new options: neither Following nor Favorites can be set as the default.

Instagram says its research indicates people are “more satisfied” with a ranked feed, so it will not default users into a chronological feed experience when they open the app. Twitter, however, recently found the opposite was true. After the company introduced an easier way to move in between its algorithmic and chronological feed, users were so angry that they couldn’t set the latter as their default that Twitter actually scrapped the whole idea.

When Instagram first switched over to an algorithmic feed in 2016, it saw a similar backlash. But unlike Twitter, it ignored it.

Arguably, today’s users have become complacent with algorithmically ranked content — in fact, they sometimes seek it out. Instagram’s main competitor TikTok has an algorithmic home feed called the “For You” page that’s so sophisticated it’s described as “scarily accurate,” “scary smart” and even “magical.” Users talk of how well TikTok knows them and how addictive they find the app. TikTok, as a result, passed Instagram and Facebook to become the largest app by downloads as of 2021, and it saw the most consumer spend during that same year.

The reality is that many of those who vocally demand a chronological feed as their default tend to be heavy users of a service — power users, essentially — or those who like to tightly control every aspect of their online interactions. But someone who launches Twitter or Instagram only a few times a month probably doesn’t care that much that their feed was sorted and ranked for them.

That said, these feed-ranking decisions should ultimately be the users’ choice — not the choice of the platforms.

In providing choice, the platforms would satisfy their power users while those who didn’t care would continue to leave their feed as is — never becoming inspired to dig through the settings to make a change to an app they consider, at best, an occasional boredom buster.

After all, this is not like defaulting younger teens’ profiles to private — a choice Instagram made (under regulatory pressure) to ensure its younger users were safer on its service. Feed ranking is about how a user wants to interact with the service’s content. If anything, a chronological feed option could reduce the potential harm that comes from algorithms. For instance, it may stop pushing vulnerable teens toward eating disorder content, for example, simply because they liked some posts about healthy eating and exercise.

Of course, the platforms have no interest in giving users a by-default chronological feed. Algorithmically ranked feeds are more engaging and therefore, offer a better means of keeping users scrolling so they can be shown more ads. And that translates to more money.

But the platforms may eventually have that choice made for them. Today, U.S. lawmakers have introduced several bills in an effort to force platforms away from their over-reliance on algorithms. The Protecting Americans from Dangerous Algorithms Act wants to make companies legally liable if their algorithms amplify misinformation that leads to offline violence. The Don’t Push My Buttons Act would give users more control over their online experience by declining to be served content that optimizes for engagement via data collection and algorithms. The bipartisan Filter Bubble Transparency Act would require platforms to offer users an option to switch the algorithms off. The EU, meanwhile, is working toward the adoption of the Digital Services Act, which includes regulations on recommender systems (algorithms that determine what people see).

Instagram’s decision, in other words, was not one done to appease its users, but because it has seen the writing on the wall and wants to get ahead of the coming legal requirements that could force it to make changes anyway.