Moove, an African mobility fintech that provides vehicle financing to drivers of ride-hailing platforms like Uber and other gig networks, has raised $105 million in new Series A2 financing.

Existing investors Speedinvest, Left Lane Capital and thelatest.ventures (the first two are lead investors from its Series A) led this round, shared between $65 million equity and $40 million debt. New investors such as AfricInvest, MUFG Innovation Partners, Latitude and Kreos Capital participated.

The announcement is coming almost seven months after Moove closed its $23 million Series A round and a month after the mobility fintech closed $10 million in debt financing. The startup, launched in 2020, is now present in six African cities: Lagos, Accra, Johannesburg, Cape Town, Nairobi and Ibadan.

Africa is home to more than a billion people, where a majority have limited or no access to vehicle financing. In 2019, the region had fewer than 900,000 new vehicle sales, compared to 17 million recorded by the U.S. that same year.

Owning a car is a luxury for most of the population, and startups such as Moove are looking to provide a long-term fix through vehicle financing for those who can make money off owning cars — gig drivers or mobility entrepreneurs, as Moove describes them.

Moove, which deals with new cars, is a flexible option for drivers who want to get into the business of ride-hailing without having to borrow from car owners or take bank loans to finance cars bought from dealerships. 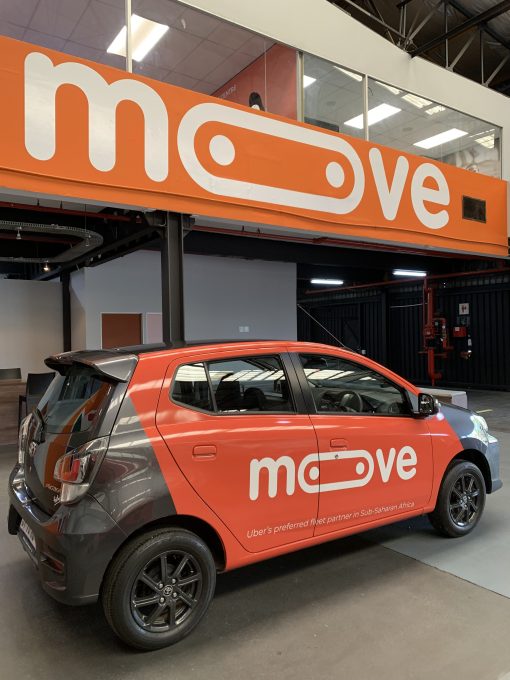 Here’s how it works: Drivers sign up on the platform and, once verified, are trained and sign contracts with Moove to access loans to buy or rent cars. The company gets these drivers on Uber’s platform — its exclusive partner across Africa — and then deducts weekly rental fees from their earnings before transferring the balance to their accounts.

The loans are between 12 and 48 months, and when drivers repay them (at an 8% to 13% annual interest rate), they own the cars, the company said.

“We have been able to provide financial freedom through vehicle ownership for some of our customers who have finished the program in different markets,” Ladi Delano, co-founder and co-CEO, said when asked how many drivers have managed to gain ownership of cars since using the platform.

“So we’re still a young business. Those at 48 months are yet to finish their term. But some that signed up very early in the business on the shorter products have been able to pay off and make purchases.”

The chief executive didn’t provide hard numbers on loan repayment for cars financed, the number of gig drivers using the platform (as at last August, it had 12,900 pre-approved sign-ups), or revenue (which Delano said has grown 50% month-on-month from last August). However, he mentioned that Moove-financed vehicles have completed over 3 million rides since it launched two years ago.

This number isn’t exclusively from ride-hailing platforms. It also includes two-wheelers used for bike-hailing, courier and logistics services, and trucks, verticals Moove has since expanded into across its seven African cities after inking partnerships with providers like Uber and Lori.

The revenue-based vehicle financing platform said it will scale this model to gig drivers in other vehicle classes such as three-wheelers and buses.

While the new Series A2 round will provide Moove firepower to scale across its present markets, it also helps the company move into new markets outside Africa.

“One of the things that we found and we’re very excited about is that this problem of lack of access to financing for mobility entrepreneurs is not just unique to Africa,” said the co-founder, who started the company with co-CEO Jide Odunsi.

Moove is targeting seven new markets across Asia, MENA and Europe over the next six months. “As you can see, this white space that we discovered on mobility fintech, we want to make sure that with this new funding round, we continue to have our first-mover advantage. We go into these new markets to build businesses and to meet our customers at their point of need,” Delano added.

Moove’s total funding is $174.5 million in debt and equity. Delano argued that this amount isn’t enough to cater to market demands. Yet, that large sum provides enough arsenal to chase markets outside Africa, where it has had to compete with Autochek, FlexClub and Planet42, which employ different vehicle financing models. In its newer markets, Moove will face fresh competition from players such as Southeast Asia’s Carro, U.K.’s Drover and France’s Virtuo.

In a TechCrunch interview last August, Delano said Moove was exploring the introduction of EVs for its “mobility entrepreneurs,” so at least 60% of the vehicles it finances will be electric or hybrid in the coming years. These car models are expensive for the average African, but Moove’s partnerships with OEMs would make them affordable, Delano said at the time.

But adoption has been a hard sell for drivers in Africa so far, especially around lack of access to power and purchasing power. Delano said the company is using the investment to work on a more sustainable approach to launch EV solutions for its gig drivers in Africa and its new markets.

“We have managed to build a Nigerian solution for what we now know is a global problem. And that is exciting for us. Because not only do we have the opportunity to help solve the lack of access to vehicle financing problems for mobility entrepreneurs in Africa, but now we have the opportunity to take this Nigerian-born solution to the rest of the world,” Delano said on scaling the Nigerian-based company outside the shores of Africa.

“This is something that we’re just so proud of and we’re excited. And I’m hoping that it’s going to be the beginning of a lot more Nigerian-born startups and solutions being able to solve global problems.”