Challenger banks have become, collectively, a force to be reckoned with in the world of financial services for consumers, and today one of the big players out of the Nordics — Lunar — is announcing growth funding along with two new services to continue filling out its ambition of providing a one-stop super app for its users.

The startup has raised €70 million ($77 million at today’s rates), at what I understand from a person close to the company to be over a $2 billion post-money valuation. Along with that news, it’s launching a crypto trading platform and B2B payments for its small and medium business customers.

The new services join a swelling list of offerings for its users. Lunar has a full banking license (setting it apart from a number of other neobanks, which operate on other banks’ rails), and it offers checking and deposit accounts; loans and other credit services like buy now, pay later; stock, fund and ETF investing for consumers; plus business accounts, loans and financial management for SMBs.

The latest investment is an extension to the company’s Series D, which had a first close of €210 million in July of last year. The round — in total led by Heartland with Kinnevik, Tencent and IDC Ventures also participating — is now closed out at €280 million. This latest tranche has previous backers in it (Lunar doesn’t spell out names), but maybe more notably (sorry VCs), it also has a superstar in it: Will Ferrell, who is starring in a marketing campaign for the startup, was cut in on the deal. 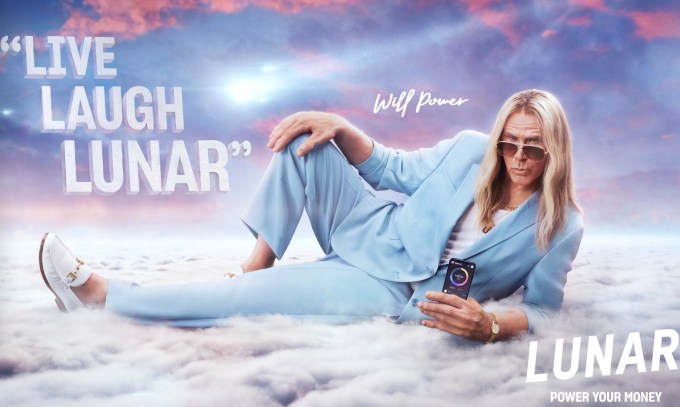 Why Will Ferrell? Ken Villum Klausen, Lunar’s founder and CEO, said the comedian is massive in the Nordics, not just because of his star turn in the “Eurovision” movie, or the fact that he’s married to a Swedish woman, but also because it seems that his comedic and life ethos seems to marry up well with Nordic popular culture and the wide demographic swath that Lunar is targeting. It’s random enough of an endorsement that it becomes humorous in itself, exactly the kind of vehicle you associate with Ferrell in his less marketing-focused pursuits.

Lunar is still very much in the middle of a rolling funding process. From what I understand, it is already raising its Series E, which is expected to close in May of this year at an even higher valuation. This latest valuation, which PitchBook puts more specifically at $2.25 billion, looks to be the first time those numbers have been publicly discussed.

It has now raised €345 million in total, with other past investors including Seed Capital, Greyhound Capital, Socii Capital and Chr. Augustinus Fabrikker.

One reason for Lunar’s quick pace of funding is the fact that it’s growing fast and it wants to strike while the iron is hot. When it raised the first tranche of the Series D, it had 325,000 customers. That number has now grown to 500,000 across a footprint that includes Denmark (its home base is in Copenhagen), Sweden and Norway. The plan is to double down on more services serving the Nordics, which will include a launch into Finland, before spreading into more markets in Europe and farther afield.

The crypto trading product underscores how the company is going about its expansion strategy more widely: Villum Klausen points out that when Lunar launched in the Nordics, it was already an uphill battle to position it as a “challenger” bank because basic banking in the Nordics was already so ahead of the game globally, with some 95% of consumers already using digital banking services provided by incumbents when it launched. Conversely, it’s also not that easy to just wade in and be a neobank in the region, because to offer any services you need to deeply integrate with the existing infrastructure and a specific approach that is based around ID numbers, he said. This has proven to be a high barrier to entry for would-be competitors to move into the market.

But while that seems to foreshadow that Lunar definitely has ambitions to move beyond its Nordic shores (with a name and stratospheric association to match that), the startup is actually still focused on building out services that ferret out what the incumbents are still not providing, to build those services into the Lunar platform, not least because, he points out, that Nordic consumers and businesses are some of the most lucrative not just in Europe but the world in terms of the value-added services they take, the money they transact with, and so on.

Case in point: He told me that currently Lunar has some €1.3 billion in deposits on its books, and it is using that to run its loan product rather than taking out debt. Its loan products are currently the highest revenue generators at Lunar, he said.

Crypto trading, in that context, occupies a funny place in the Nordics, Villum Klausen told me. On one hand, it’s hugely popular, with 10 of the top 20 or so most popular apps in regional rankings being those that enable crypto trading. But on the other hand, the process is somewhat stunted: People can buy currency and trade currency on those apps, but if they want to get money out (say, cash out to fiat), they cannot do so in local currencies at the moment.

“The transactions will get rejected because Nordic banks do not want to transact with international crypto platforms,” he noted. The reasons for that are the ones you would expect: Right now, there is no regulation for tracking those transactions to ascertain where the money is coming from or where it will be going, and no way to insure the banks against fraud or other illegal activity in those transactions.

That presented an opportunity to Lunar to take on the risk:  Bring people to the platform to trade, and get them to cash out with Lunar itself, making money off the exchange or service fees associated with the transactions. (Which I suppose it has calculated will more than compensate for any risk it takes on by providing that service, sans regulation or other rules, in the first place.)

At launch, users will be able to trade and cash out Bitcoin, Ethereum, Cardano, Polkadot and Doge.

As with the crypto launch, Villum Klausen believes that the complexities of offering services in what is essentially a total addressable market of just 27 million people are just too small for most players to bother with, even if it’s proving to be a great place to structure the bigger business and make strong returns for Lunar as a very regional player. (It’s also the early approach that Klarna took, and look where it is today.)

“We don’t know why no one else entered the Nordics before, either,” he said, but TAM of 27 million is “not much compared to, say, Germany.”

“But we believe we can build a massive business on that smaller market.” And it’s a bet that investors clearly believe is a sound one for now.

“The investment builds on our strategy of backing best-in-class businesses and management teams,” Lise Kaae, the CEO of Heartland, said in a statement when the first tranche was announced. “We look forward to supporting the team in developing next generation digital-first financial services in the Nordics and beyond.”