It’s estimated that there are more than 1 billion people using Microsoft’s Excel in the world today, and a significant part of those are smaller-business people, and of those, 80% lean on the spreadsheet software to keep track of their finances. Now, a startup called DataRails, which has built a set of financial planning and analytics tools for those users, so that they can get more out of their numbers on Excel (or whatever spreadsheet app is being used, for that matter), is announcing some funding on the back of seeing strong take-up of its product.

The New York/Israeli firm has raised a Series B of $50 million, which it plans to use to continue adding more functionality to its existing product, including more predictive modeling capabilities; and to start build new functionality for other spreadsheet-using teams beyond the finance department such as marketing, sales and human resources. DataRails will continue to focus squarely on SMBs.

“Predictive analytics, modeling [is] the holy grail,” Didi Gurfinkel, the co-founder and CEO, said about the priorities of SMBs, as it gives them access to the kind of functionality that has long been available to larger businesses but generally hasn’t been downsized as a product for companies that might have only 50 employees. “When we meet a prospect and they ask about this, we understand what they want, and we know they will become a customer.”

Qumra Capital is leading the round, with new backers La Maison Partners and Claltech, and previous backers Zeev Ventures, Vertex Ventures Israel, Innovation Endeavors, Vintage Investment Partners, ORYZN and Icon Venture, all participating. Gurfinkel, who co-founded the company with Eyal Cohen (the CPO), said DataRails would not be disclosing valuation, only noting that the number went up three-fold since its last round of $43.5 million, which closed in June 2021, and that its bigger goal was to become a billion-dollar company.

For more context, the company’s revenues in the last year grew 5x, and it has “hundreds” of customers, Gurfinkel said, declining to give an exact number for either of these metrics, too. 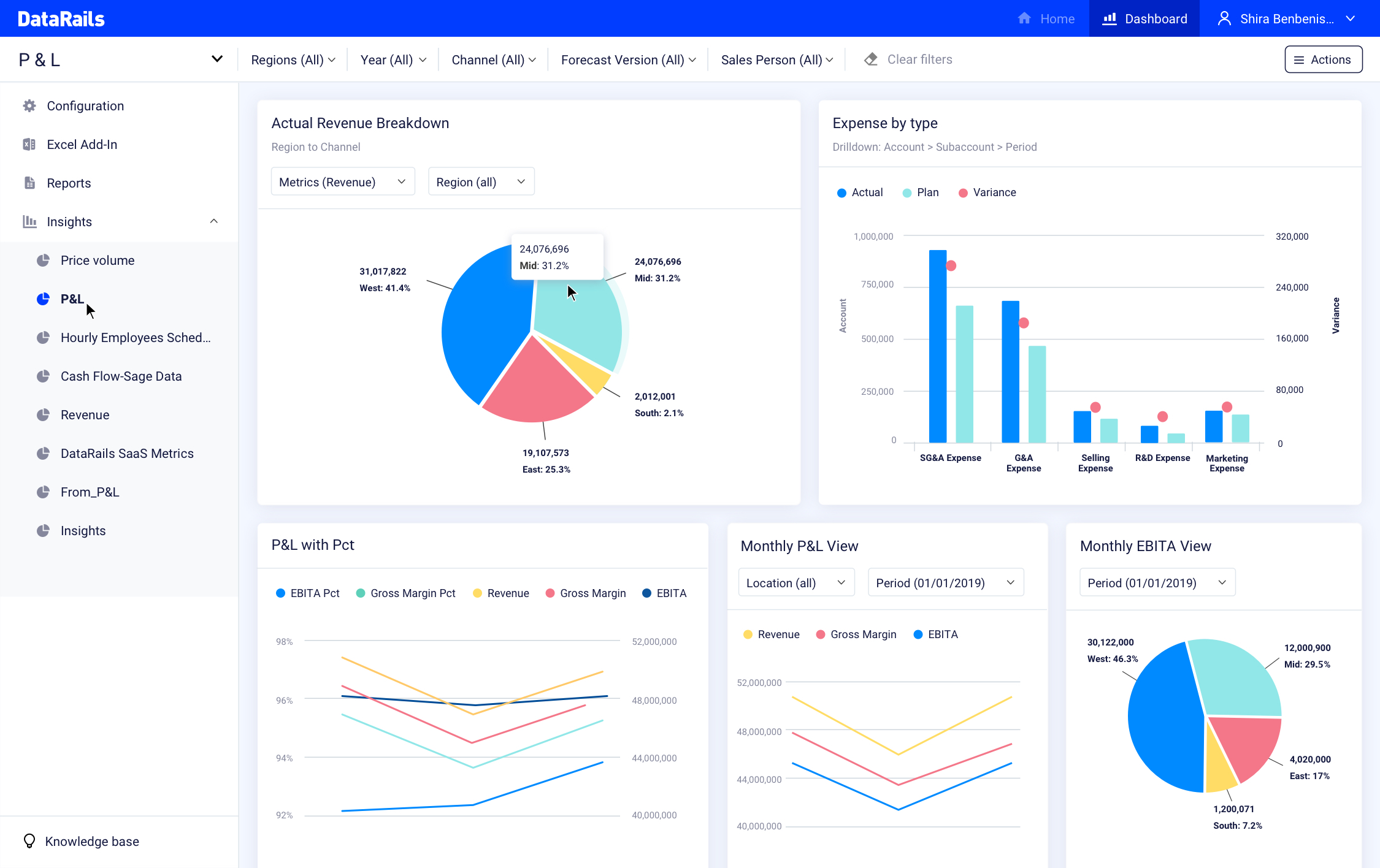 Before honing its focus on financial planning and analysis, DataRails, as we’ve detailed in the past, had spotted an opportunity to provide tools to supercharge Excel, knowing that it was widespread in its use to track budgets, P&Ls, balance sheets and month-end reporting, but not really in its functionality, especially when it came to running calculations to answer queries particular to certain teams (like finance).

Interestingly, its initial focus was not on SMBs and financial planning, but organizations of all sizes and providing tools to help them manage financial reporting and auditing, for purposes like taxes and compliance. That functionality is still on the platform but DataRails as a whole expanded beyond that because “analytics was more interesting,” as Gurfinkel put it.

“When a finance director or CFO wakes up in the morning, their motivation is to see something new, and to understand something they might not have understood the day before. Compliance tools are a part of their responsibilities, but not really part of their desire to be the smartest person in the room.”

It also happens to be a very lucrative area to target, estimated to be a $7.8 billion market annually in the U.S. alone, Gurfinkel said. And I might add, still relies on the same trove of data as the original product, giving the company a more diverse set of products leveraging the same connections and information.

The company, Gurfinkel said, maintains no plans to reinvent the wheel and build its own spreadsheet software, preferring instead to build on top of the most popular packages in use today, which include not just Excel, but Google’s Sheets, Numbers from Apple and more. That potentially insulates DataRails from being too platform-dependent on Microsoft, but also positions it as an attractive startup to snap up by one of these platform providers as they continue to look for more value-added services and engagement and long-term stickiness with their user bases.

“DataRails is leading the transformation of financial teams’ operations, empowering teams in every organization with deep business intelligence (BI) capabilities. For the first time, all financial data is uploaded to the cloud, providing continuous agility and content sharing,” said Sivan Shamri Dahan, managing partner at Qumra Capital, in a statement. “DataRails has become one of the fastest-growing SaaS companies we have seen and we look forward to partnering with the company as it continues its outstanding market expansion.”