Netflix is bringing its short-form video feature “Fast Laughs” to TV’s big screen. Launched a year ago, the TikTok-inspired feed of funny videos had previously been available only on mobile devices, where it serves as a way to introduce Netflix users to new shows, movies and comedy specials they may want to watch.

The smartphone version of “Fast Laughs” was given a prominent position in the Netflix app, where it’s currently the middle button in the bottom navigation bar — a placement that seems to indicate the streamer is worried about losing users’ time spent on mobile to rival video apps like TikTok, or now, Instagram and Facebook’s Reels.

Similar to TikTok, “Fast Laughs” on mobile had offered a swipeable, vertical video feed where buttons to react, share or save the content are stacked on the right side of the screen. However, Netflix’s goal is not to develop a social platform; it’s to encourage users to add shows, movies and specials to their Netflix watch list or jump right in to start streaming a title after viewing the short video teaser.

The opt-in feature will begin to appear on members’ homepages, somewhere around rows six through 12. In this case, the idea is to serve up the short videos at a time when users have been scrolling down looking for something to watch. And instead of navigating through the content vertically, as on the phone, the videos can be clicked through with your remote control via the arrow on the right side of the screen.

At the bottom of the screen, you can see the program’s name and rating, and can choose to click a button for “More Info,” to be directed to the title’s landing page. 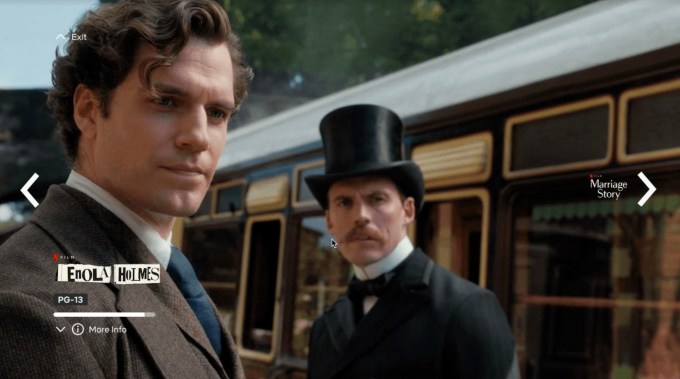 As the feature can sometimes showcase more mature content, it will not appear on kids’ profiles. (Netflix had tested a kid-friendly short-form video feature on mobile, too. But that one is not yet expanding to the TV.) However, “Fast Laughs” will respect users’ maturity settings, if configured, Netflix notes.

At launch, the TV version of “Fast Laughs” will include clips from Netflix movies like “Army of the Dead,” “Fatherhood” and “The Kissing Booth;” TV shows like “Big Mouth,” “Dead to Me” and “Never Have I Ever;” stand-up comedy from Ali Wong, Jo-Koy and Jerry Seinfeld; and more.

Netflix says “Fast Laughs” on the TV is still considered a test for the time being and will first start rolling out to English-speaking markets including the U.S., Canada, the U.K., Ireland, New Zealand and Australia, among others. These rollouts began on February 22 and will slowly continue in the days and weeks ahead.

“Fast Laughs” isn’t the first time the company has borrowed a concept from social media apps when designing new features. In 2018, Netflix adopted the “Stories” format when introducing its Previews feature. And Netflix is always experimenting with ideas that could help members better discover content from its catalog. Last year, for instance, it tried to introduce more serendipity into the Netflix experience with the launch of its “Play Something” shuffle mode feature, which would play a title the service thinks you may like based on your interests and prior viewing behavior.