Messenger is rolling out its “Split Payments” feature to all iOS and Android users in the United States, Meta announced on Wednesday. The company began testing the feature late last year as a way for users to share the cost of bills and expenses through the app. Meta sees the new feature as a “free and fast” way to handle finances through Messenger.

To use Split Payments, users need to click on the “Get Started” button in a group chat or the payments tab in Messenger. From there, you can split a bill evenly or modify the contribution amount for each individual in the group chat, either with or without yourself included. You’ll also have the option to enter a personalized message. Lastly, you will be asked to confirm your Facebook Pay details, after which your request will be sent and viewable in your group chat thread. Meta says that friends who are new to payments in Messenger can easily add payment details to send and receive money.

“If you’ve struggled with dividing up (and getting paid back for) group dinners, shared household expenses or even the monthly rent, it’s about to get easier,” the company said in a previous blog post about the new feature. 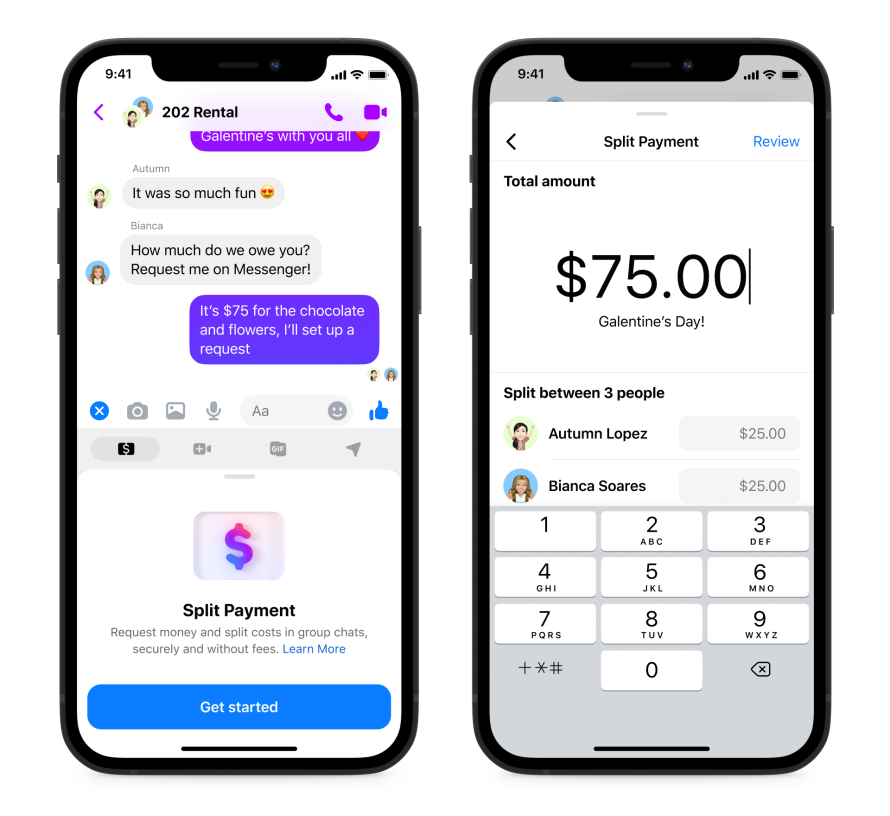 The launch of Split Payments comes as Messenger added Venmo-like QR codes for person-to-person payments last summer. The codes launched in the U.S. and allow anyone to send or request money through Facebook Pay — even if they’re not Facebook friends. The feature can be accessed under the payments section in Messenger’s settings.

Facebook Pay first launched in November 2019, as a way to establish a payment system that extends across the company’s apps for not just person-to-person payments, but for other things like donations and e-commerce.

Split Payments was introduced alongside the news that Messenger is launching new voice message recording controls so users can pause, preview, delete or continue recording a voice message before sending it. The company is also increasing the duration of voice messages from one minute to 30 minutes.

Today’s announcement comes as Messenger recently updated its end-to-end encrypted chat experience. The company said that its feature offering end-to-end encrypted group chats and calls in Messenger is now fully rolled out. Messenger also added another security feature that will alert users if someone snaps a photo from Messenger’s disappearing messages. Users are also now able to add GIFs, stickers and reactions to their encrypted chats.

How to ruin the metaverse? Build it around profit and centralization