This spring, Facebook confirmed it was testing Venmo-like QR codes for person-to-person payments inside its app in the U.S. Today, the company announced those codes are now launching publicly to all U.S. users, allowing anyone to send or request money through Facebook Pay — even if they’re not Facebook friends.

The QR codes work similarly to those found in other payment apps, like Venmo.

The feature can be found under the “Facebook Pay” section in Messenger’s settings, accessed by tapping on your profile icon at the top left of the screen. Here, you’ll be presented with your personalized QR code which looks much like a regular QR code except that it features your profile icon in the middle.

Underneath, you’ll be shown your personal Facebook Pay UR which is in the format of “https://m.me/pay/UserName.” This can also be copied and sent to other users when you’re requesting a payment.

Facebook notes that the codes will work between any U.S. Messenger users, and won’t require a separate payment app or any sort of contact entry or upload process to get started.

Users who want to be able to send and receive money in Messenger have to be at least 18 years old, and will have to have a Visa or Mastercard debit card, a PayPal account or one of the supported prepaid cards or government-issued cards, in order to use the payments feature. They’ll also need to set their preferred currency to U.S. dollars in the app.

After setup is complete, you can choose which payment method you want as your default and optionally protect payments behind a PIN code of your choosing.

The QR code is also available from the Facebook Pay section of the main Facebook app, in a carousel at the top of the screen.

Facebook Pay first launched in November 2019, as a way to establish a payment system that extends across the company’s apps for not just person-to-person payments, but also other features, like donations, Stars and e-commerce, among other things. Though the QR codes take cues from Venmo and others, the service as it stands today is not necessarily a rival to payment apps because Facebook partners with PayPal as one of the supported payment methods.

However, although the payments experience is separate from Facebook’s cryptocurrency wallet, Novi, that’s something that could perhaps change in the future. 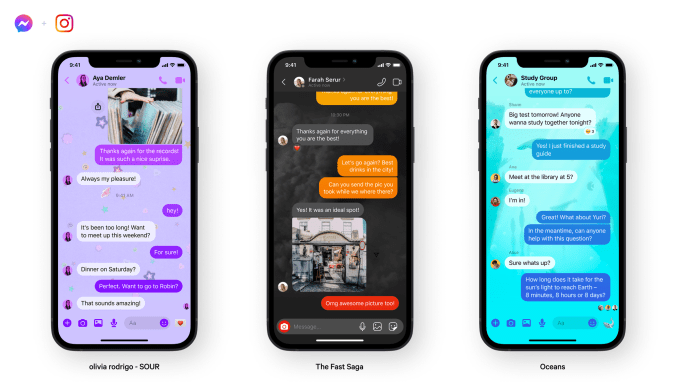 The feature was introduced alongside a few other Messenger updates, including a new Quick Reply bar that makes it easier to respond to a photo or video without having to return to the main chat thread. Facebook also added new chat themes including one for Olivia Rodrigo fans, another for World Oceans Day, and one that promotes the new F9 movie.