Google is being sued in Europe on competition grounds by price comparison service PriceRunner which is seeking at least €2.1 billion (~2.4 billion) in damages.

As well as fining Google what was — at the time — a record-breaking antitrust penalty (€2.42 billion), the EU’s competition division ordered the search giant to cease illegal behaviors, after finding it Google giving prominent placement to its own shopping comparison service while simultaneously demoting rivals in organic search results.

Immediately following the order, Google made some initial tweaks to how its product search service works — doubling down on an auction model. But complainants were instantly critical of the changes, arguing they neither remedied the unfairness nor complied with the EU’s requirement for equal treatment of price comparison services.

The following year, an investigation by Sky News also accused Google of trying to circumvent the EU antitrust ruling by offering incentives to ad agencies to create faux comparison sites filled with ads for their clients’ products which Google could display in the Google Shopping box to present the impression of a thriving marketplace for price comparison services.

More recently (April 2020) Google announced a major retooling of product search under the Shopping ‘tab’ — saying it would switch Google Shopping to mostly free listings globally by the end of 2020. Albeit, the service still offers advertisers the ability to pay Google for featured listings.

Google also continues to show product search ads alongside general search results — in an ads box which includes a “Shop now” call-to-action in the title (see the box displayed below right for examples of ads displayed after a product search for “Samsung TV”): 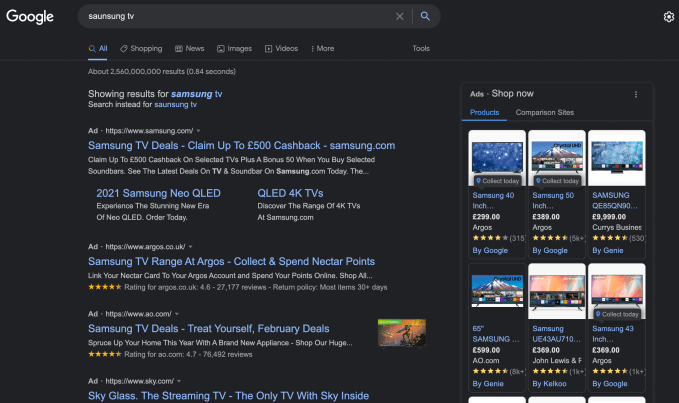 PriceRunner’s lawsuit alleges Google has continued to violate competition law in relation to product search, as well as seeking compensation for historical infringements that have allowed Google to reap revenue at rivals’ expense.

To back up its allegations, the search comparison company points to a study conducted by accountancy company, Grant Thornton, which it says found prices for offers shown in Google’s own comparison shopping service can be 16-37% higher for popular categories like clothes and shoes, and between 12-14% higher for other types of products vs rival price comparison services.

PriceRunner also cites estimates that European consumers are overpaying billions per year as a result of Google’s search engine returning links to products that are more expensive than equivalents offered via (non-Google) price comparison services.

“What the EU Commission stated was [Google is] moving down competitors in the search results. It is causing consumers to overpay enormous amounts of money every year because Google is not showing the most relevant results and with too high prices when they could show better results further up,” PriceRunner CEO, Mikael Lindahl, told TechCrunch.

“They’ve tried to do some changes to the service meaning it’s possible to resell the ads based on top of Google… It’s still an auction-based model… And when Google knows that they should show results from [rivals] they have to do this and they are not. So they are definitely still abusing their position since consumers are still hurt.”

The tech giant’s search engine continues to have a massively dominant share of the market in the region — taking over 90% of marketshare in most countries in the European Economic Area and in the U.K.

“Google should show the most relevant result and it should be based on the normal search algorithms,” Lindahl added. “What they cannot do — what the EU Commission says is illegal — is when they manually and with algorithms manipulate the search results to get the competitors further down in the results, and this is what they’re doing.”

The Commission’s 2017 order against Google Shopping was upheld last year by the General Court of the EU which largely dismissed Google’s appeal against the Commission’s antitrust decision — paving the way for litigation funders to feel more confident about opening their wallets.

PriceRunner says its legal action is being supported by a litigation funder called Nivalion.

“Of course this is a David against Goliath situation and we had to make sure that we are really well prepared for a very long fight so we have external financing,” said Lindahl, adding: “Nivalion is taking tens of millions of euros of costs — for an upside when we win this. Basically they’re as convinced as we are that this will work out very well for us.

“So we’re prepared for many years of fight and we have all the resources we need.”

When pressed on its exact objections to changes Google has made since the 2017, Lindahl also pointed to the General Court ruling, saying: “Reading between the lines but also rather concrete from the General Court statement from November last year it’s clear that the remedies are not sufficient.

“I don’t want to comment in detail — because it will of course be part of this process — but it’s very obvious to us that Google has not changed their behavior and it seems to be obvious to the General Court as well. That’s my judgement.”

“What they have done is they’ve made it possible for more people to pay Google money to be on top,” he added in further remarks on how Google has changed price comparison since the EU’s antitrust order. “It’s still an auction-based model. So the one paying the most will be on top on the Google results — and if you’re looking for a Samsung TV for a low price, for a good deal, well it’s impossible for someone paying the most for the traffic to also show the lowest price.

Reached for comment on PriceRunner’s lawsuit, Google sent us this statement — attributed to a spokesperson:

The changes we made to shopping ads back in 2017 are working successfully, generating growth and jobs for hundreds of comparison shopping services who operate more than 800 websites across Europe. The system is subject to intensive monitoring by the EU Commission and two sets of outside experts. PriceRunner chose not to use shopping ads on Google, so may not have seen the same successes that others have. We look forward to defending our case in court.

Asked for a response to Google’s rebuttal Lindahl added: “Google’s response today is exactly what we expected, avoiding the fact that they have been convicted by both the European General Court in November 2021 and that consumers are paying higher prices because of their service. We look forward to this fight and the legal process begins now.”

We also asked PriceRunner whether it has sought to press its complaint about Google’s Shopping remedy still not working with the Commission itself.

Lindahl said it has had “several” meetings with the EU’s executive — but he also pointed to Google’s lobbying blitz in Brussels — and urged the Commission to “finish this”.

“It’s obvious that Google has a lot of power in all instances and in all markets in Europe and that they can push things in their favor… The Commission has to wrap this up, they have to stop this abuse, because otherwise they are showing the European consumers that they tried but they can’t beat the tech giants — and that’s not acceptable.”

“It’s really important that they wrap this up because no one will thank commissioner [Margrethe] Vestager for starting this if she doesn’t stop it,” he added. “What happens here is we see a movement in power, in strength — where the really big tech giants they don’t have to change their models, they can continue abusing the situation because they’ve reached a certain size and that’s just not acceptable.

“This time it’s about a product comparison but next time… it can be flights or insurance or whatever. So if we don’t take this battle for the sake of European tech companies everyone else will be hurt next, that’s my view.”

The Commission was contacted for comment on the lawsuit and to ask whether it has ongoing concerns about Google’s compliance with the Shopping enforcement order but at the time of writing it had not responded. We’ll update this report if we get a response.

Update: A Commission spokesperson told us:  “We continue to carefully monitor the market with a view to assessing the effectiveness of the remedies.”

The spokesperson went on to highlight what they described as a “significant uptake of the remedy” following the Commission decision, noting that the rate of display of offers from Google competitors make up approximately 75% of total inventory of Shopping Units, and about 90% of the Shopping Units displayed by Google have at least one offer from competitors.

The Commission also noted that about “half the clicks” within Shopping Units are on offers from competitors of Google.

“The recent judgement by the General Court which largely upheld the Commission’s decision in the Google Shopping case, does not touch directly upon the question of the remedy. However, we are currently analysing it carefully to see whether, indirectly, it could have implications for the mechanism that Google chose to comply with the decision,” the spokesperson added, saying the Commission is also “liaising with all stakeholders to understand their views on this matter”.

The spokesperson further noted that any person or any company who’s been affected by anti-competitive conduct can bring a claim before courts in an EU Member State to seek damages.

An EU directive, called the Antitrust Damages Directive — which should have been transposed into national law by 2016 — was intended to make it easier for victims of anti-competitive practices to obtain damages, per the spokesperson, who also pointed to information and guidance on making claims available on the Commission’s website (here).