The scale of the tech industry’s spending to influence the European Union’s tech policy agenda has been laid out in a report published today by Corporate Europe Observatory and LobbyControl — which found hundreds of companies, groups and business associations shelling out a total of €97 million (~$115 million) annually lobbying EU institutions.

The level of spending makes tech the biggest lobby sector in the region — ahead of pharma, fossil fuels, finance and chemicals — per the report by the two lobbying transparency campaign groups.

The EU has a raft of digital legislation in train, including the Digital Markets Act, which is set to apply ex ante controls to the biggest “gatekeeper” platforms to promote fair competition in the digital market by outlawing a range of abusive practices; and the Digital Services Act, which will increase requirements on a swathe of digital businesses — again with greater requirements for larger platforms — to try to bring online rules in line with offline requirements in areas like illegal content and products.

Tackling online disinformation and threats to democratic processes — such as by updating the EU’s rules for political ads running online and tighter regulation of online ad targeting more generally — is also being eyed by Brussels-based lawmakers.

The bloc is also in the process of agreeing to a risk-based framework for applications of artificial intelligence.

At the same time, enforcement of the EU’s existing data protection framework (GDPR) — which is widely perceived to have been (mostly) weakly applied against tech giants — is another area where tech giants may be keen to influence regional policy, given that uniformly vigorous enforcement could threaten the surveillance-based business models of online ad giants like Google and Facebook.

Instead, multiple GDPR complaints against the pair are still sitting undecided on the desk of Ireland’s Data Protection Commission.

A small number of tech giants dominant EU lobbying, according to the report, which found 10 companies are responsible for almost a third of the total spend — namely: Google, Facebook, Microsoft, Apple, Huawei, Amazon, IBM, Intel, Qualcomm and Vodafone — which collectively spend more than €32 million a year to try to influence EU tech policy. 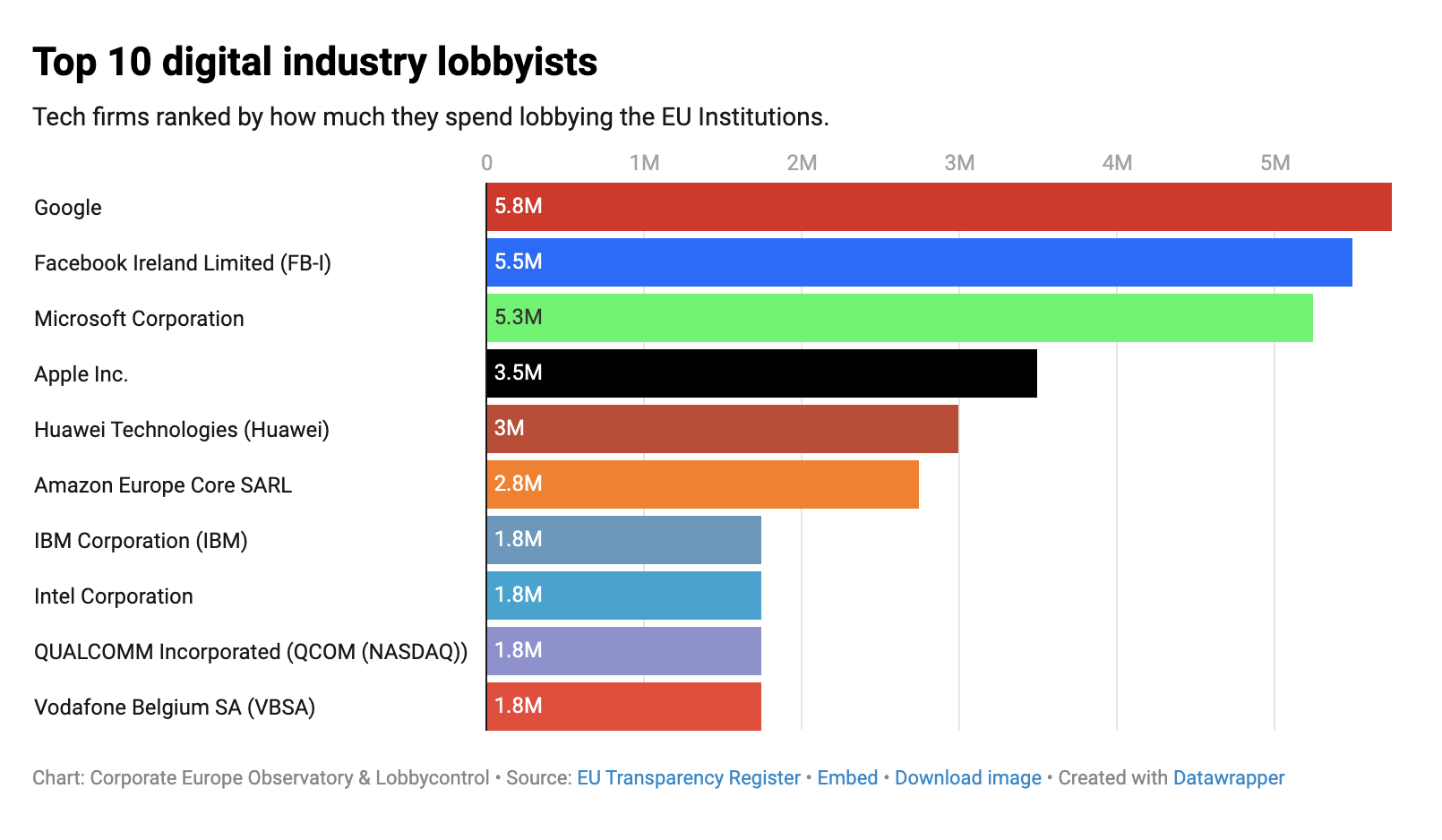 Unsurprisingly, U.S.-based tech companies dominate industry lobbying in the EU — with the report finding a fifth of the companies lobbying the bloc on digital policy are U.S.-based — although it suggests the true proportion is “likely even higher”.

While China-based (or Hong Kong) companies were only found to comprise less than 1% of the total, suggesting Chinese tech firms are so far not invested in EU lobbying at anywhere near the level of their U.S. counterparts.

“The lobbying surrounding proposals for a Digital Services pack, the EU’s attempt at reining in Big Tech, provides the perfect example of how the firms’ immense budget provides them with privileged access: Commission high-level officials held 271 meetings, 75 percent of them with industry lobbyists. Google and Facebook led the pack,” write the pair of transparency campaign groups.

The report also shines a light on how the tech industry routinely relies upon astroturfing to push favored policies — with tech companies not only lobbying individually but also being collectively organised into a network of business and trade associations that the report dubs “important lobby actors” too.

Per the report, business associations lobbying on behalf of Big Tech alone have a lobbying budget that “far surpasses that of the bottom 75 per cent of the companies in the digital industry”.

Such a structure can allow the wealthiest tech giants to push preferred policy positions under a guise of wider industry support — by also shelling out to fund such associations which then gives them an outsized influence over their lobbying output.

“Big Tech’s lobbying also relies on its funding of a wide network of third parties, including think tanks, SME and startup associations and law and economic consultancies to push through its messages. These links are often not disclosed, obfuscating potential biases and conflicts of interest,” the pair note, going on to highlight 14 think tanks and NGOs they found to have “close ties” to Big Tech firms.

“The ethics and practice of these policy organisations varies but some seem to have played a particularly active role in discussions surrounding the Digital Services pack, hosting exclusive or skewed debates on behalf of their funders or publishing scaremongering reports,” they continue.

“There’s an opacity problem here: Big Tech firms have fared poorly in declaring their funding of think tanks – mostly only disclosing these links after being pressured. And even still this disclosure is not complete. To this, Big Tech adds its funding of SME and startup associations; and the fact that law and economic experts hired by Big Tech also participate in policy discussions, often without disclosing their clients or corporate links.”

The biggest spending tech giants were contacted for comment on the report. We’ll update this article with any response.

Like other companies who work with European institutions, we detail our work in the EU transparency register and we have clear policies in place to protect the independence of the people and organisations we sponsor, including a requirement to disclose funding.

The European Union has been and remains an important stakeholder for Microsoft. We seek to be a constructive and transparent partner to European policymakers.

We also reached out to the European Commission for comment.

A Commission spokesman told us: “The criticism misses the point that the EU is regulating tech, faster and more thoroughly than any other democratic part of the world — first with the GDPR, and now with our DSA / DMA proposals, as well as with our proposals on AI and data.

“Also when it comes to transparency, the Commission has been uncompromising in delivering the highest standards of transparency — on who we meet and on who seeks to influence us. We have led by example and have been applying the “no registration, no meeting” rule for years now. This means that only those singed up to the Transparency Register can meet with our key decision-makers. Information those meetings is published online and available for anyone to have a look.”

“The Commission is open to meeting anyone who wishes to speak to us,” he added. “The Commission does not, and will not control who requests meetings, nor how often. It is also not for the Commission to explain or comment on lobbying strategies of the different companies and interest representatives.”

The Commission spokesman also defended the outreach process it has engaged with on the DSA and DMA proposals specifically — pointing out that the public consultation ran from June to September and garnered approaching 3,000 replies (2K of which were from citizens) — adding: “The European Commission services in charge of drafting and negotiating these regulations have taken extra care to engage with civil society actors, NGOs, and consumer organisations — at all stages of the proposal. All legitimate stakeholders have been granted sufficient access by the European Commission to have their voices heard before the regulation proposal was finalised, in line with the Better Regulation guidelines. The negotiation team continues to be in regular exchanges with civil society actors and consumer organisations. Let me also point you to the fact that as always, the Commission organised broad consultations in preparation of its proposals on platform regulation.”

The full report — entitled “The Lobby Network: Big Tech’s Web of Influence in the EU” — can be found here.