SaaS Labs has raised $42 million in a new financing round, less than three months after closing its previous funding, and acquired two startups as it looks to aggressively grow its automation platform that serves sales and support teams at small and medium-sized businesses.

Sequoia Capital India led SaaS Labs’ Series B round. Base 10 Partners and Eight Roads Ventures, two existing backers, as well as entrepreneurs Anand Chandrasekaran, Allison Pickens, Michael Stoppelman and Amit Agarwal participated in the round. The new funding follows the California and Noida-headquartered startup’s $18 million Series A raise in October.

For big businesses and enterprises, scores of tools exist to bring more efficiency in their sales and support operations. But the same isn’t true of small and medium-sized businesses. That was the learning Gaurav Sharma walked away with at his previous venture, called HelloSociety, in the U.S. (The firm was acquired by The New York Times.)

“SMBs are very underloved and underserved if you look at the software offerings they have at their fingertips,” he told TechCrunch in an interview. Enterprises, in comparison, “have access to awesome tools to improve the productivity of their agents,” he said.

For the last six years, SaaS Labs has been building AI-powered tools that are “equally powerful” to empower sales and support teams at smaller firms. These offerings are no-code solutions, removing the need of having an IT team to deploy them.

“These tools are also very affordable and integrate seamlessly with other business stacks and on-premise hardware solutions that small businesses rely on,” he said.

The challenge more than 15 million sales and support agents face today is that they have to manually update their call logs and CRM tools that are not designed to offer real-time updates to their managers. This creates a gap in their communication channels, where no intervention can happen in real time. 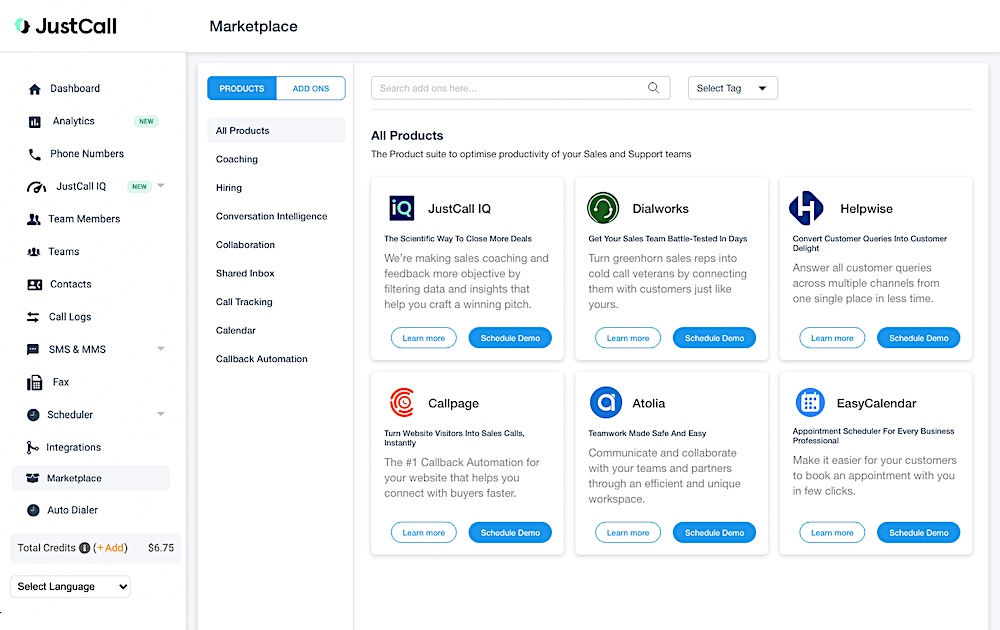 Dashboard of JustCall, a SaaS Labs offering that allows SMBs to set up a cloud-based contact center for sales or support teams within minutes. Image Credits: SaaS Labs

“Chaos starts happening when you’re a five-person team that is doing customer communication. So these teams can use our offering called JustCall.io, for instance, which integrates with over 100 other business tools. JustCall, which has a database of over 100 million calls to work through, uses machine learning to access the quality of the calls and whether the playbook or workflow is being followed. Managers then can only look at the calls that have been poorly graded instead of trying to sift through every call,” he said.

The startup has amassed more than 6,000 customers globally. It typically sees a small business join the platform by paying as little as $25 a month and overtime happily move to paying tens of thousands of dollars annually as their businesses grow.

Over 70% of these customers are based in the U.S. today, and 10% in the U.K. Some of its customers include Grab, GoStudent and HelloFresh.

The startup, which has been profitable for years, said it grew its revenue by 2.5 times last year.

On Thursday, it also announced two acquisitions — Poland-based CallPage, a callback automation tool for sales teams to connect with their leads instantly, and France-based Atolia, a productivity and collaboration tool. (Their teams will join Saas Labs as full-time employees.) Sharma said these acquisitions are helping SaaS Labs broaden its product offerings and also deepen its footprints in various markets.

A portion of the new funds will be deployed to acquire many more startups, said Sharma.

“While we are well capitalized, this round gives us the firepower needed to double down on what’s working, hire great talent globally, launch innovative products, focus on brand marketing and get aggressive with strategic M&As. As SMBs continue to adopt software to modernize different functions like sales, support, and marketing, etc. within their business, we are confident that SaaS Labs will be able to capture that opportunity and grow 30x in the coming five-seven years.”

He is looking to take SaaS Labs public within the next four to five years, he said.

“SaaS Labs is building a multi-channel customer communication platform for small and medium businesses. Through a suite of products, it offers an experience that marries the efficiency of digital and the intimacy of offline communication channels,” said Tejeshwi Sharma, managing director at Sequoia Capital India, in a statement.

“Its flagship product JustCall, for example, has been able to drive deep impact. Customers, on average, reported time savings of 12 hours a week per agent on manual tasks while customer satisfaction improved by 30%. Sequoia Capital India is thrilled to partner with Gaurav and the team as they build the future of customer communication,” he added.