As the streaming market grows, so has the demand for content. But even though it’s now easier than ever for filmmakers to create, distribution is still often controlled by traditional systems — meaning many filmmakers are still being shut out of Hollywood if they don’t have the right connections. A company called Filmhub is working to solve this problem by making distribution easier and more efficient, via technology. With its platform, filmmakers can directly distribute to more than 100 streaming channels, including big names like Amazon Prime Video, Apple TV, IMDb TV, TCL, Tubi, Plex and others.

Today, Filmhub is announcing a $6.8 million seed round led by Andreessen Horowitz (a16z).

Other participants in the round include 8VC, FundersClub, Eleven Prime, Tara Viswanathan (CEO of Rupa Health), Nick Greenfield (CEO of Candid), David Fraga (former COO of InVision) and Jerrod Engelberg (CEO of Codecov).

Filmhub got its start in 2016 as a side project by co-founder Klaus Badelt, an LA-based film composer who has worked on more than 100 titles over the years, including “The Thin Red Line,” “Gladiator,” “Pirates of the Caribbean: The Curse of the Black Pearl” and others. He had seen the opportunity in the space as the cost of production decreased and more films were getting made, but weren’t able to get strong distribution. Badelt later teamed up with tech industry veteran Alan d’Escragnolle, who had previously worked at places like Square, Mint.com and Google, to take the project full time in 2020.

Since then, Filmhub has been focused on growing the business, adding streaming channels as partners, and bringing on more filmmakers who want an easier way to have their work discovered by an audience, without having to give up their rights.

Filmhub begins by interviewing the filmmakers to ensure their content meets the technical specifications of the streamers it works with. The company will then get that content up on as many streaming services as possible using automated technology and its own sales team. Though its name is “Filmhub,” d’Escragnolle clarifies this content doesn’t have to just be full-length movies. It can also be serialized content like TV shows, shorts or any sort of professionally produced content. But its focus is on working directly with the filmmakers, he says.

“We believe that the traditional studio system doesn’t end up being the most friendly to filmmakers. For instance, if you make a studio film as a filmmaker, you’re typically paid upfront,” explains d’Escragnolle. But if the film takes off, the filmmaker may not be able to share in the revenues their work earns, he points out. “We believe that there’s an opportunity to restore power to the creator and the original filmmaker, and allow them to build a library of their own,” d’Escragnolle adds.

In a way, what Filmhub is doing is similar to what other distribution platforms — like DistroKid — have done for the music industry, as they’ve allowed artists to upload their work directly to top streaming services instead of having to first sign a deal with a label.

One of Filmhub’s more recent partnerships is with Struum, the ClassPass-like streaming service that aggregates content from smaller video services under its own subscription. Filmhub said it had been working with Struum to help filmmakers who were participating in a particular film festival* gain distribution for their work, the company told TechCrunch. It said Struum would carry filmmakers’ work exclusively for three months, allowing filmmakers to retain their earnings.

Typically, Filmhub takes a 20% revenue share of the royalties made by the films it distributes. However, the rates each streaming service pays Filmhub will vary.

*It was Slamdance, and they weren’t happy to have their name used. The company reached out after publication to clarify it doesn’t have any partnership or relationship with either Struum or Filmhub, which use of its name in press releases and reports had implied. Slamdance President and co-founder Peter Baxter has never spoken with or engaged with anyone from Struum or Filmhub, a spokesperson said. And while Slamdance believes Filmhub has the right to approach filmmakers directly, they can’t say they’re doing it “with” Slamdance. The company also bristled at the fact it felt like its name was being used to promote two services that are counter to that of the Slamdance Channel, we were told. 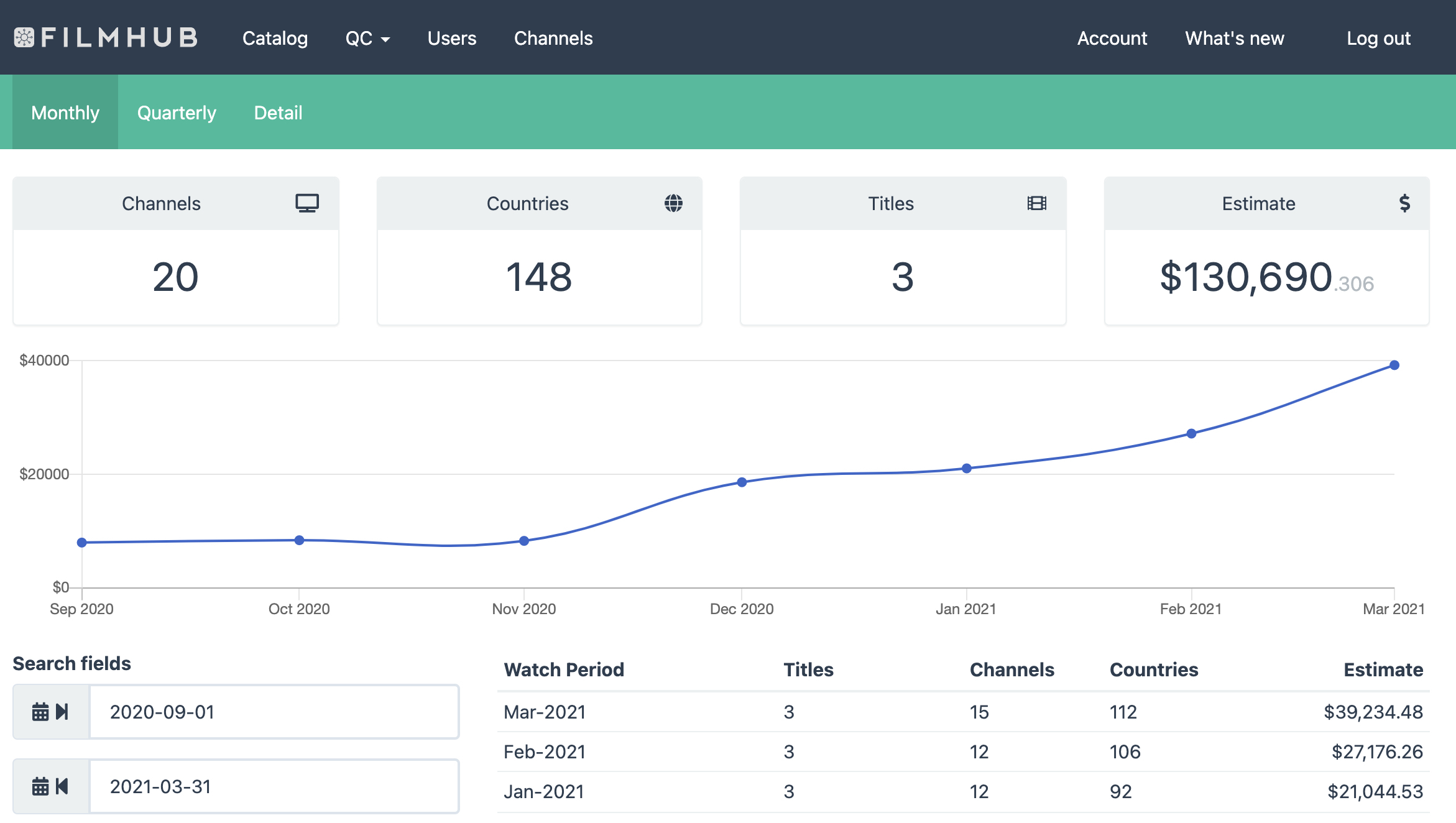 Though the company isn’t sharing its revenue figures, d’Escragnolle says revenue has increased by 3x year-over-year, and it has grown from distributing thousands of titles to now 10,000 titles. Its content reaches over 100 streaming channels. With the data it has on hand, the company is also able to help its streaming partners better determine what sort of content will best perform on its services. This, in turn, can help close deals.

Not all the content Filmhub distributes is new. Some films may be modern, like Torsten Hoffmann’s  2020 documentary, “Cryptopia — Bitcoin, Blockchains, and The Future of the Internet,” for example. But older content, like the 2014 title “An Honest Liar,” about magician James Randi, can also see a strong second life when they hit the streaming platforms. According to d’Escragnolle, Filmhub is distributing classics from the 50s, 60s and 70s, as well, which it considers “evergreen.” These sorts of movies and TV shows may not have ever gained traction on television today, but can take off on streaming services where they’re able to connect with different audiences.

In time, Filmhub aims to launch its own direct-to-consumer streaming service, which will feature the filmmakers’ content. It hopes to make this service available across devices and even as an add-on within other companies’ existing streaming platforms. The company is hiring for this project now, along with others in engineering, technical operations and sales, as a result of the funding, to grow its team of now just 35 people.

“In today’s market, unless you’re an established filmmaker, it can be very difficult to have your work discovered. This is a missed opportunity for both streaming services and consumers alike, especially given the potential we’re seeing for more diverse and international content,” said Andrew Chen, general partner at a16z, about his investment. “By working to move the industry’s distribution model forward, Filmhub is creating a win-win-win for creatives, platforms and viewers globally,” he added.