When you search for a sensitive tag — think something like “marijuana” — the updated Tumblr iOS app will now hide search results. Instead, a pop-up will appear, prompting you to turn off the sensitive content filter if you want to see the results of your search. If you click “show me the settings” to see sensitive content, you’re redirected to the Tumblr website on your mobile browser, not an in-app menu. Once you change your settings, you have to restart the iOS app for the change to take effect. Finally, you’ll be able to see search results that include fan art of Baby Yoda hitting a blunt (yes, really). 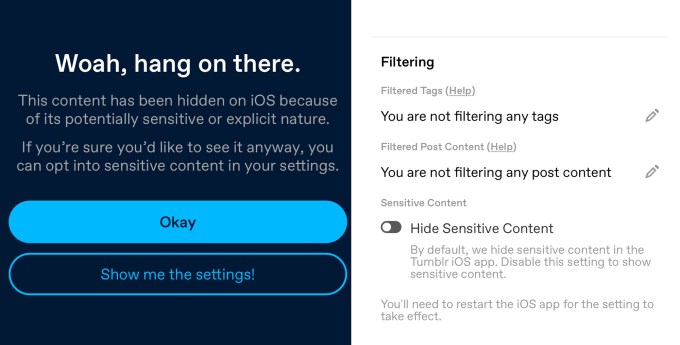 According to Tumblr, when the “Hide Sensitive Content” toggle is enabled, the app will hide post recommendations that have sensitive tags, blogs with sensitive content and searches with sensitive tags. (Sensitive content, by Tumblr’s definition, is not quite as explicit as adult content, which Tumblr defines as GIFs, images, videos or illustrations depicting sex or genitals. Adult content is currently banned.)

“Some content is marked sensitive when it may not be appropriate for everyone but doesn’t violate our community guidelines,” Tumblr told TechCrunch. “It’s that content which this web toggle addresses. Other content is appropriate across Tumblr and remains unaffected by this toggle.”

When the new toggle is disabled, users can see sensitive search results that don’t violate community guidelines or tap through an overlay to access blogs marked explicit — though the explicit content will still be hidden on iOS. Users with the toggle disabled will also receive recommendations of potentially sensitive content.

Meanwhile, when the toggle is enabled, some seemingly benign tags may still trigger the warning pop-up. For example, we found in testing that the tag “submission” is banned unless you opt out of the sensitive content filter, due to the word’s sexual context. This is an issue because the tag is often used in another, non-sexual way on Tumblr’s platform — if you post something to your blog that another user submitted to you, it will automatically be tagged “submission.”

“These latest updates provide more control to our community on the iOS app to build the experience that fits them best, and to explore the content that they find interesting,” Tumblr said in a company blog post. “While the experience for our community is a top priority, we must also comply with Apple’s App Store Guidelines and our own guidelines.”

Update 1/12/21, 11:00 AM EST with clarification from Tumblr about the difference between sensitive and adult content