Hide your “Tony the Tiger”/”Eugene Levy” fan fiction — those phrases, along with hundreds of others, are now banned from Tumblr’s iOS app.

Now, any personal blog that flags itself as “mature” is not accessible on the iOS app — users will see a pop-up explaining that the content has been hidden because of “potentially suggestive or explicit content.” Tumblr also said that certain posts will be hidden in the search function and on user’s dashboards — which shows recommended posts, as well as content from the users they’re following.

“In order for us to remain in Apple’s App Store and for our Tumblr iOS app to be available, we needed to make changes that would help us be more compliant with their policies around sensitive content,” Tumblr wrote in a blog post. 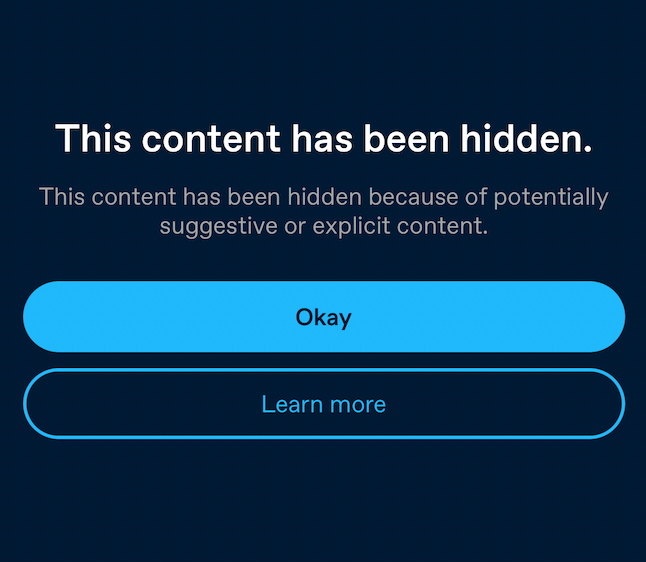 Many Tumblr users flock to the site to talk anonymously about their experiences, but some of these tag bans effectively censor those conversations. Several tags related to stimming, a common coping practice for autistic people, are banned, along with tags like “depression,” “PTSD” and “bipolar.”

“We understand that these adjustments will impact how users are able to access potentially sensitive content while using our iOS app, and that can be frustrating,” a Tumblr spokesperson told TechCrunch. “We are working on more thoughtful solutions which will be rolled out in the near future and we will keep the community updated as that work continues.”

A former Tumblr iOS engineer who blogs on the site as sreegs explained what might be causing this problem and its ineffective, bandaid-like solutions.

Of course, it’s a Sisyphean task to scrub a user-generated content platform of any adult content. But Apple’s standards for Tumblr seem particularly stringent.

Tumblr wrote on its Changes blog yesterday that it’s reviewing the list of tags that can’t be accessed in the iOS app, and it expects this review process to pick up in January.

“We’re working on a web-based toggle that would allow folks to opt into allowing sensitive content in the iOS app,” it added.

Tumblr users often refer to the platform as a wasteland of the internet. The app itself once subtitled its iOS app as “hellsite (affectionate)” in the App Store. So why do people keep using it?

“We’re busted enough that people assume the site is dead, so stuff like this has super easy workarounds,” a dedicated Tumblrite told TechCrunch. It’s not hard to find these workarounds if you search “tag ban,” on the site, but regular users know that the search function is very buggy anyway. “I bet the broken search feature is actually coming in clutch here. Shit just doesn’t show up half the time, which means we can’t find it, but neither can Apple.”

“I honestly believe being a dumpster fire has fully worked in Tumblr’s favor at this point,” the avid Tumblr user said. “We’ve got no algorithm, so we still get to curate our experience exactly how we want.”

Trouble in fandom paradise: Tumblr users lash out against its beta subscription feature